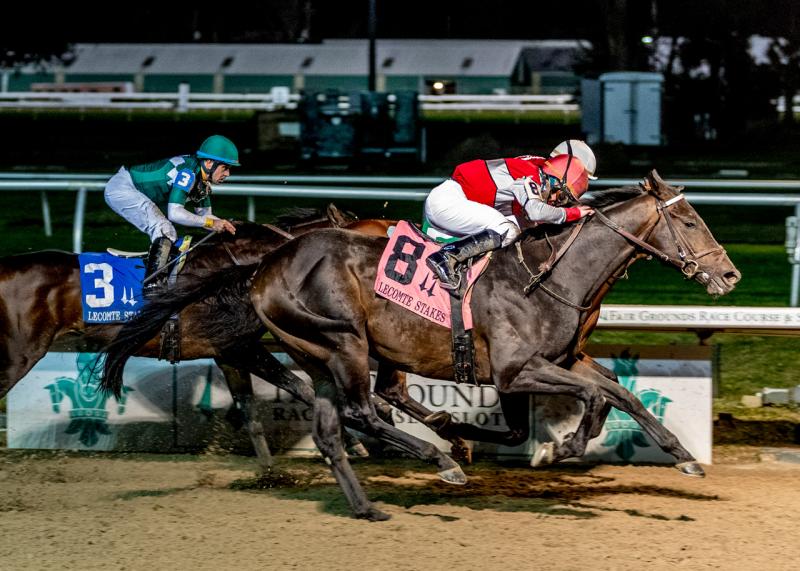 Last seen finishing seventh in the Kentucky Jockey Club (G2) at Churchill Downs, Call Me Midnight was sent off as a 28-1 outsider in Saturday’s $200,000 Lecomte (G3) at Fair Grounds. But the Keith Desormeaux trainee was rejuvenated by his holiday vacation, and came roaring late to deny Epicenter on the line. Pappacap was a close third in his comeback.

Peter L. Cantrell’s Call Me Midnight had a latent piece of form as the runner-up in a Keeneland maiden to Giant Game, who was subsequently third in the Breeders’ Cup Juvenile (G1). Call Me Midnight broke his maiden convincingly next time at Churchill, prompting connections to wheel him back for the Kentucky Jockey Club. After his non-threatening effort behind Smile Happy, though, Desormeaux realized that two weeks’ rest was a bit too quick between starts. His trainer hoped that freshening him up for the Fair Grounds would be the key, and Call Me Midnight responded.

Confidently handled by James Graham, the son of Midnight Lute bided his time near the tail of the field as front-running Epicenter set a demanding pace. Surfer Dude and Blue Kentucky chased before giving way, while Pappacap crept closer and cut the corner into the stretch. The slight 3-2 favorite over the 8-5 Epicenter, Pappacap challenged, but Epicenter fought him off and began to edge away.
Then Call Me Midnight surged into the picture. Finishing with all of the momentum, the dark bay colt drew alongside Epicenter to force a photo-finish. The camera proved that Call Me Midnight’s head was in front, and his backers received a $59 windfall.

By finishing 1 1/16 miles in 1:44.36, Call Me Midnight joined the Kentucky Derby (G1) leaderboard with 10 points. Epicenter added four points for his near-miss, and combined with his 10 from the Gun Runner S., he now has 14.

Pappacap, another three-quarters of a length back in third, picked up two points and likewise sports a total of 14. With the tiebreaker of non-restricted stakes earnings, Pappacap ($558,000) still clings to the top spot from Epicenter ($100,000).
Trafalgar fared best of the stakes firsters in fourth, good for one point. Next came Presidential, who improved from last into fifth; Cyberknife, who retreated after a brief advance out wide; Blue Kentucky; Unified Report; and a tailed-off Surfer Dude.
Call Me Midnight boosted his bankroll to $221,806 from a record of 7-2-1-0. Bred by Hartwell Farm in Kentucky, the colt is a veteran of the sales. His highest price, by far, was also his most recent, when Cantrell went to $80,000 to secure him at OBS March.
Call Me Midnight’s dam, Overseen, was bred by Juddmonte Farms from the immediately family of unbeaten multiple stake queen Taraz. By Juddmonte blueblood First Defence, Overseen descends from one of their blue hens, Slightly Dangerous, whose major winners include European mile star Warning and 1993 Epsom Derby (G1) hero Commander in Chief.

Desormeaux indicated that the Risen Star (G2), back at Fair Grounds Feb. 19, would be next. Smile Happy is reportedly eyeing the same spot for his return, setting the stage for a rematch. 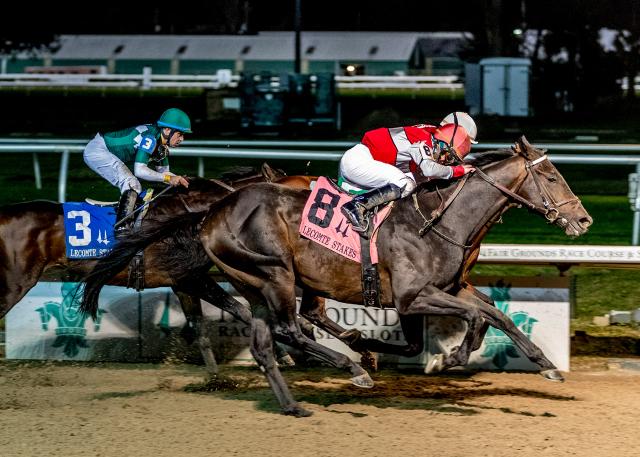