A compact field of six will travel 1 ½ miles on the Woodbine turf on Saturday in the $800,000 Canadian International Stakes (Can-G1). The talented cast features four European imports, including the defending champion, as well as a pair of contenders with local experience.

Surging French invader draws the rail for his North American debut and rates as the one to beat given his current form run. The four-year-old gelding was a winner in the Prix de Deauville (Fr-G2) most recently, which followed a huge run when a head second in the deep Grand Prix de Saint Cloud (Fr-G1). He races for expert connections and will be tough to topple with his best performance on Saturday.

Five-year-old never got involved when a late fifth in the Arlington Million (G1) in his first North American venture, but the gelding gets more ground to work with today. The Andrew Balding pupil was a smart runner-up at Newbury most recently and will be equipped with blinkers for this assignment. Robert Hornby will be in the controls.

Gelded son of Flower Alley was a game second in the local prep for this race, finishing 2 ½ lengths behind the mighty Old Persian in the Northern Dancer Stakes (Can-G1). The Ian Wilkes trainee has been mostly consistent in 2019 and proved to have an affinity for the course last time out. The Kentucky-bred will be rallying from off the pace in this assignment.

Defending champ beat an arguably deeper field in 2018 and rates an obvious chance in his second North American venture. The seven-year-old son of Halling rolls in with a trio of Group 3 wins in succession, and he owns a potent turn of foot which he displayed over the course last year. The Irish-bred will be the one to hold off late under Andrea Atzeni.

Wildcard was a Group 3 victor in his native Germany last time out and could be any kind today in his first run at Woodbine. The bay colt receives Lasix for the initial time in this contest, and the son of Camelot has faced some fine opponents this season on German soil. The French-bred is an intriguing contender in the field.

Local hope from the barn of Kevin Attard draws outside in the compact field in hopes of taking down the winner’s share of the lucrative purse. The eight-year-old has won or placed in each of his three outings this year, and he had a nice tune-up with a win at Parx most recently. Top local pilot Eurico da Silva will be in the silks atop the Keystone State-bred. 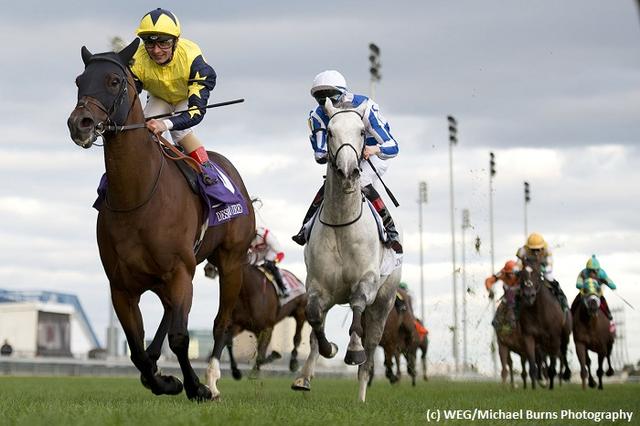