Capo Kane much the best in Jerome

Capo Kane opened the New Year with a convincing victory in Friday’s $150,000 Jerome S., scoring by 6 1/4 lengths in the Kentucky Derby qualifier at Aqueduct. Overlooked at 6-1 odds, the Harold Wyner-trained colt led wire-to-wire in his stakes debut with Dylan Davis.

By 2007 Kentucky Derby winner Street Sense, Capo Kane was exiting a 4 1/2-length romp in his second start, a mile and 70-yard maiden special weight at Parx in late November.

The 3-year-old jumped straight to stakes competition, and Capo Kane picked up 10 points in the Road to the Kentucky Derby series event.

Eagle Orb broke on top in the five-horse field, but Capo Kane hustled forward from his inside post to show the way on a short lead. Swill, the 7-5 favorite following a fourth in the Kentucky Jockey Club (G2) at Churchill Downs, made a run at the pacesetter on the latter half of the far turn. Eagle Orb, the 8-5 second choice, offered a bid entering the stretch.

Capo Kane had plenty in reserve, rebuffing both challengers and accelerating clear. Up by 2 1/2 lengths with a furlong remaining, he drifted out late while widening his advantage, and Capo Kane completed the one-turn mile distance in 1:38.02.

Eagle Orb easily held second, nearly three lengths better than Hold the Salsa, who got up to edge Swill by a nose for third. Original was eased.

Capo Kane was bred in California by Rising Star Farm. California Chrome, who won the Kentucky Derby and Preakness in 2014, was the last California-bred to wear the roses.

A bargain $26,000 purchase at the Fasig-Tipton Maryland 2-year-old sale, Capo Kane is the first foal to race from the dam Twirl Me, a daughter of Hard Spun, who finished second to Street Sense in the 2007 Kentucky Derby. 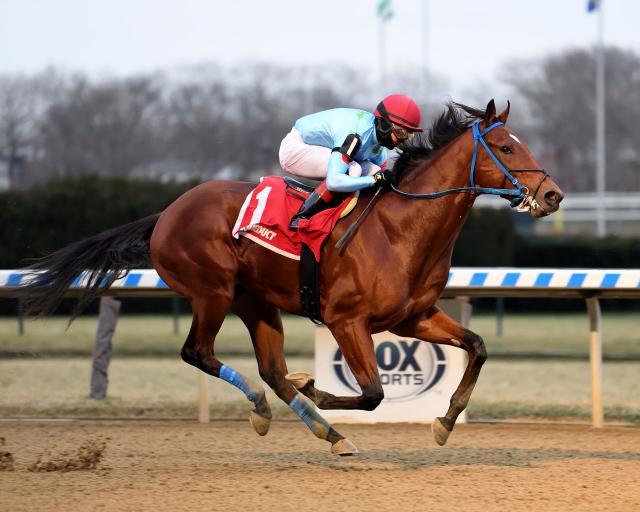