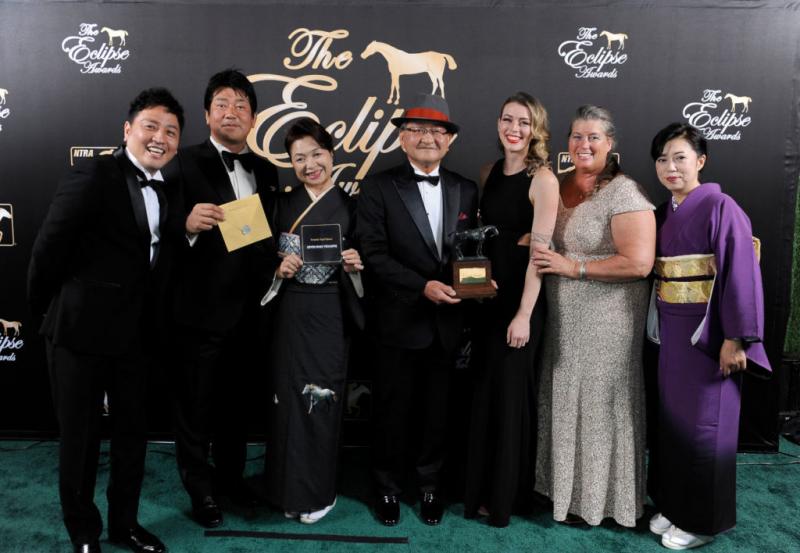 Trainer Yoshito Yahagi (center) with the Eclipse Award won by champion turf mare Loves Only You (Photo by Horsephotos.com)

While the Kentucky Jockey Club (G2) is Saturday’s lone domestic scoring race on the Road to the Kentucky Derby, the Japan Road begins earlier on the same day with the Cattleya S. at Tokyo. The metric mile contest offers points to the top five finishers according to the 10-4-3-2-1 scale.

Internationally renowned trainer Yoshito Yahagi, who made history by sending out two Breeders’ Cup winners at Del Mar in 2021, has a promising prospect in Continuar. After justifying even-money favoritism on debut at Hanshin, he missed narrowly over the same track and about nine-furlong trip in a Nov. 6 allowance.
Now Continuar gets an eye-catching jockey change to Australian Damian Lane. The chestnut also sports a fine pedigree. By hot young sire Drefong, who was responsible for last year’s Cattleya winner Consigliere in his first crop, Continuar is out of a three-quarter sister to Japanese star Almond Eye.
Five contenders – half of the 10-horse field – won a newcomers’ race in their lone start.
Il Divino notably keeps ace Christophe Lemaire aboard following a front-running score at Nakayama Sept. 17. Although Il Divino just lasted by a head in that about nine-furlong affair, the result could be stronger than the margin implies. The top two pulled seven lengths clear of third. And the favored runner-up, Rough Asian, looks like a solid sort since he’s come back to place and win at Tokyo.
Mirror of Mind won going about 1 1/16 miles at Sapporo July 23. From the first crop of Mind Your Biscuits, the Shadai Farm homebred is a half-brother to the dam of Crown Pride, the UAE Derby (G2) hero who competed in the 2022 Kentucky Derby (G1).
Plavi prevailed as the favorite at Chukyo Oct. 1, drawing off by three in an about 1 1/8-mile test from a next-out winner. Keita Tosaki picks up the mount.
British rider Tom Marquand takes over on Jasri, who boasts a course-and-distance victory Oct. 22. Swooping from well off the pace, Jasri scored by a length under good handling. Margot Reve beat the boys here at about seven furlongs Oct. 10. A daughter of dirt star Espoir City, she parlayed an inside trip to victory.
Young World has the most experience over course and distance, having improved from a seventh here on debut to win on Nov. 5. By dirt champ Copano Rickey, Young World chased and overhauled the longtime leader by 2 1/2 lengths.
Toa Raiden, another by freshman Mind Your Biscuits, could enjoy a switch to dirt as well as a cutback in trip. A newcomers’ winner on the Kokura turf Sept. 4, he was most recently fourth in an about 1 1/4-mile allowance on a yielding course at Hanshin.
Suna Ichi Gold is himself a case in point of finding much more on dirt. By the versatile Declaration of War, he was unplaced in his first two starts on turf. But Suna Ichi Gold promptly broke his maiden on the Tokyo dirt, opening up by three lengths over this same metric mile Oct. 29. Francorchamps likewise went turf-to-dirt successfully, getting up by a neck at Fukushima this past Sunday, and tries a quick turnaround.
The Cattleya is the first of four scoring opportunities on the Japan Road, each worth progressively more points. Next on the schedule is the Dec. 14 Zen-Nippon Nisai Yushun at Kawasaki, followed by the Hyacinth S. back at Tokyo in February and concluding with the Fukuryu S. at Nakayama. 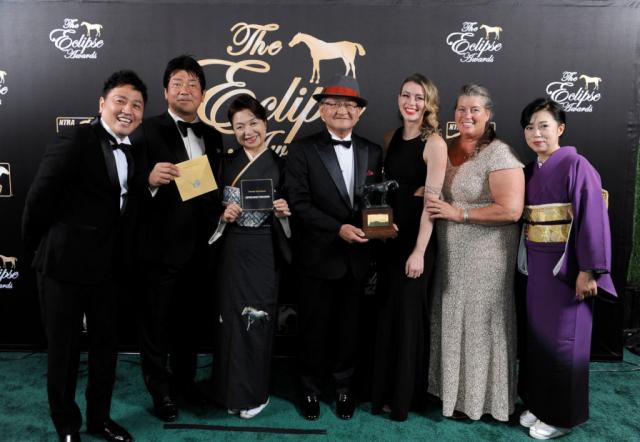