The La Troienne, for fillies and mares going 1 1/16 miles on the main track, is one of six graded stakes on Friday’s 13-race program that begins at 11 a.m. (all times Eastern) and is headlined by the 146th running of the $1.25 million Longines Kentucky Oaks (GI). The La Troienne will go as the day’s 11th race with a 4:50 p.m. post time.

Trained by Brad Cox, Monomoy Girl has won five Grade I races in her career that has produced more than $3 million in earnings. Two of her biggest victories came at Churchill Downs where she won the 2018 Kentucky Oaks and the 2018 Breeders’ Cup Distaff (GI).

Winner of the Ruffian (GII) in her most recent start, Monomoy Girl will be ridden in the La Troienne by Florent Geroux and break from post position eight.

Among the competition lined up to face Monomoy Girl is defending champion She’s a Julie and Vexatious, who upset Midnight Bisou in Saratoga’s Personal Ensign (GI) on Aug. 1.

Bradley Thoroughbreds, Tim and Anna Cambron, Denali Stud, Rigney Racing and Madaket Stables’ She’s a Julie notched her second Grade I victory in the Ogden Phipps at Belmont in June. Trained by Steve Asmussen, She’s a Julie will be ridden by Ricardo Santana Jr. and break from post position six.

Calumet Farm’s Vexatious, fourth in the 2017 Kentucky Oaks in her lone main track try at Churchill Downs, was second in the Ruffian to Monomoy Girl before winning the Personal Ensign. Trained by Jack Sisterson, Vexatious will break from post position two under Tyler Gaffalione.

McKINZIE SHOOTS FOR ALYSHEBA REPEAT – Karl Watson, Mike Pegram and Paul Weitman’s McKinzie will attempt to become the first repeat winner of the Alysheba when he takes on seven rivals.

Trained by Bob Baffert, McKinzie romped to a 4 ¾-length victory in last year’s Alysheba. Fifth in the Metropolitan Handicap (GI) going a mile in his most recent start, McKinzie will be ridden Friday by Mike Smith and break from post position two.

Looming as the top challenger to McKinzie is Allied Racing Stable’s By My Standards. Runner-up in the Whitney (GI) in his most recent start and a winner of three of five starts in 2020, By My Standards is trained by Bret Calhoun and will be ridden Friday by Gabriel Saez and break from post position six.

Scheduled as the day’s eighth race, post time for the Eight Belles will be 3:05.

Trained by Ian Wilkes, Four Graces has won four of five career starts and has posted Grade III in her past two starts in the Beaumont at Keeneland and the Dogwood at Churchill Downs.

Julien Leparoux, who has been aboard for all of Four Graces’ victories, will ride Friday and break from post position 8.

The Edgewood will go as the day’s ninth race with a 3:40 post time.

Trained by Graham Motion, Sharing will be making her first start since finishing second in the Group I Coronation Stakes at Royal Ascot. Manny Franco has the mount Friday and will break from post position three.

The Twin Spires Turf Sprint will go as the day’s 13th race with a 6:20 post time.

Owned by Diamond 100 Racing Club, Amy Dunne, DP Racing and Patrick Biancone Racing, Diamond Oops is a three-time graded stakes placed runner on dirt to go with his grass success. Trained by Patrick Biancone, Diamond Oops will be making his first start since June and be ridden by Florent Geroux out of post position one.

Bound for Nowhere, owned and trainer by Wesley Ward, won the 2018 Shakertown at Keeneland at the 5 12/2-furlong distance and finished third beaten a neck in this year’s edition July 11 in his most recent start.

Julio Garcia has the mount and will break from post position four. 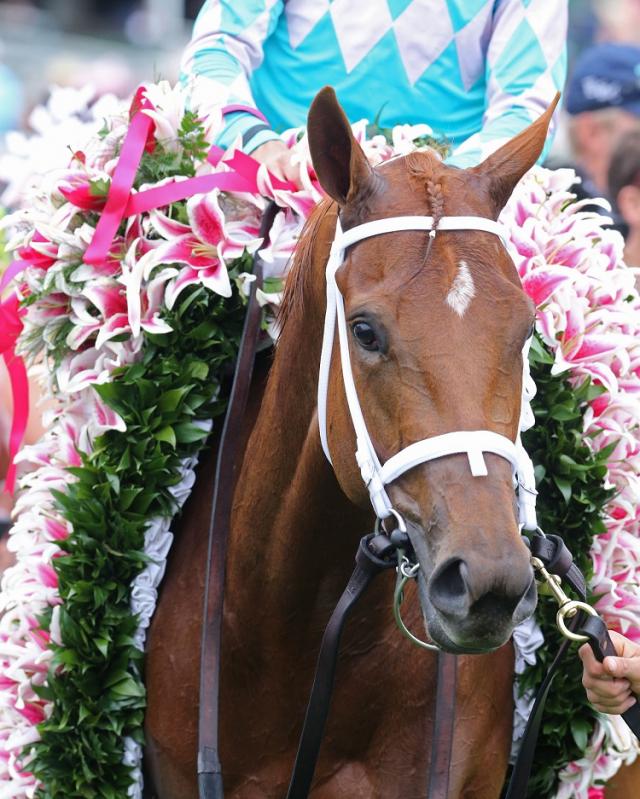