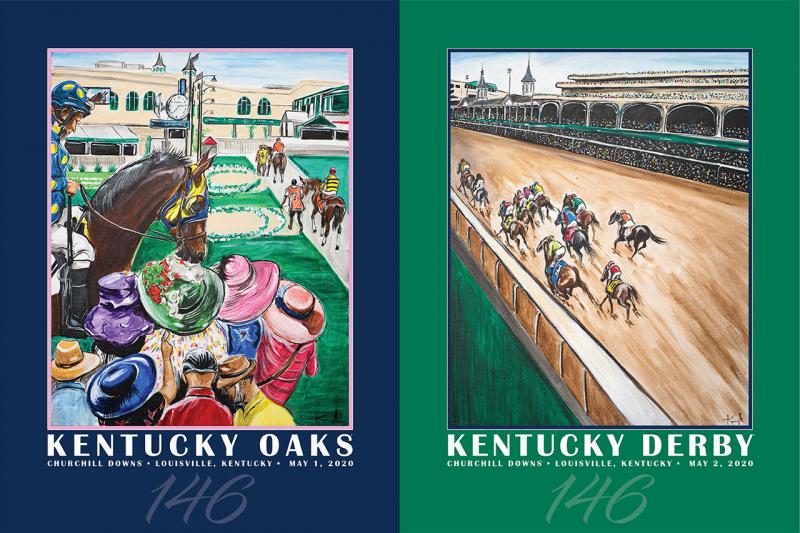 LOUISVILLE, Ky. (Thursday, November 21, 2019) – Churchill Downs today released the 2020 “Official Art of the Kentucky Derby” by beloved Louisville artist Keith Anderson. Anderson’s oil and acrylic paintings capture a perspective of the iconic race that is unlike any ever featured, sharing the energy and color that will be on display during each the 146th running of the Kentucky Derby presented by Woodford Reserve and the Longines Kentucky Oaks.

As a Louisville native and Brown-Forman employee, Anderson is no stranger to the excitement of the Kentucky Derby and horseracing. He and his art are well known among Louisvillians and Derby fans. This year he completed the stunning Woodford Reserve mural that greets Main Street visitors with a field of racing Thoroughbreds and his art graces Woodford Reserve’s beautiful 2018 and 2019 Official Derby Bottles. In the past, Anderson also served drinks from behind Churchill Downs’ bar and worked his share of famous Derby parties.

“To create the Official Art of the Kentucky Derby is an honor and a privilege and the biggest accomplishment of my career as an artist,” said Anderson. “Derby is the time for Louisville to shine. It is our Super Bowl. I thank God for the opportunity and look forward to being on the biggest stage in May.”

“Keith Anderson is a Louisville favorite whose art has become an important part of our city and its love of racing,” said Kevin Flanery, President of Churchill Downs Racetrack. “It is an honor for his work to become part of Kentucky Derby history as the Official Art of 146.”

Anderson’s interest in art began at the age of 9 when his older brother, also an artist, introduced him to various paints. While attending Valley High School, he concentrated more and more on art. Anderson sold artwork to help pay his tuition in college at Murray State. He studied art history and learned to work in a variety of mediums. Once he moved back to Louisville, he worked endless hours in his studio, trying to get into art shows. Keith wanted his art to be seen by as many people as possible. He was the first artist chosen to create two Woodford Reserve Official Derby bottles in back to back years. He was also the first employee of Brown-Forman headquarters, as well as the first African-American, to do the artwork for the bottle. Keith’s artwork can be seen throughout the city of Louisville, on buildings in downtown to the Frazier History Museum. He currently shows his art around town and plans to open his own gallery. Anderson’s original artwork for the Woodford Reserve Derby bottles is on display at Frazier History Museum until January 2020 as part of its exhibit, Woodford Reserve and the Kentucky Derby: Two Decades of Artistry, Bourbon and Horseracing.

Anderson’s “Official Art of the Kentucky Derby” will be featured on 2020 Kentucky Derby and Kentucky Oaks merchandise, including a 146 limited edition artist-signed poster with embossed and metallic ink treatments. Other merchandise includes apparel, posters, postcards and souvenir racing programs and is available at select retail outlets including the Kentucky Derby Museum and www.KentuckyDerbyStore.com. 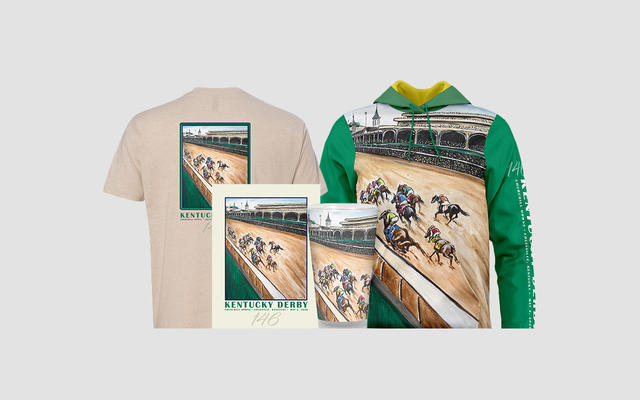