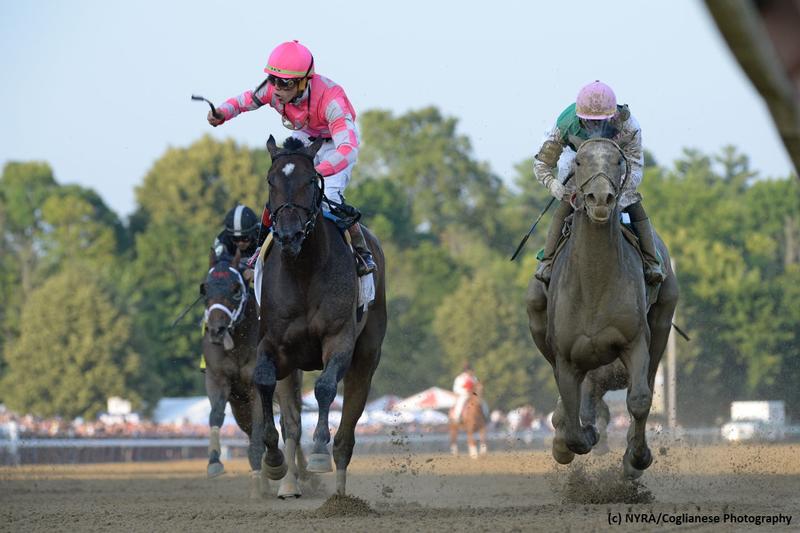 Saturday’s Travers (G1) will mark the first career Grade 1 win for the three-year-old who steps up to the challenge in the “Midsummer Derby” at Saratoga.

With Kentucky Derby (G1) winner Country House and Belmont (G1) hero Sir Winston sidelined, and demoted Derby first Maximum Security and Preakness (G1) victor War of Will both awaiting the Pennsylvania Derby (G1), the leading players in the Travers are those who placed in the classics.

The official second and third from the Kentucky Derby, Code of Honor and Tacitus, are expected to take on Preakness placegetters Everfast and Owendale as well as Belmont fourth Tax.

As of Monday, the projected Travers field stood at 12. Of the remaining seven candidates, Preakness fifth Laughing Fox is the only one who competed in a Triple Crown race. Mucho Gusto dropped off the trail before a resurgence over the summer, while Chess Chief comes off his best stakes result so far. Highest Honors is on the upswing, Endorsed and Looking at Bikinis remain promising, and Scars are Cool takes the plunge off a maiden score.

Here’s how the dozen are coming up to the Travers, according to quotes from the New York Racing Association’s barn notes.

Code of Honor, who skipped the Preakness and Belmont specifically to focus on the Travers, prepped with a stylish victory in the July 6 Dwyer (G3) at Belmont. The W.S. Farish homebred has been training forwardly on Saratoga’s Oklahoma training track, recording a couple of fast half-miles (a bullet :47.85 August 4 and :48.26 on August 11) before a final spin Monday in :49.27.

"We just wanted to get a handy half-mile into him, just a blow-out," Hall of Fame trainer Shug McGaughey said. "I thought it went excellent. He went in :49 and 2 and galloped out really well, which he always does. It was a pretty exciting work for me and I'm looking forward to Saturday."

"He's had time between races now and he's done everything right. I can't see that his last race, which was back in the first part of July, took anything out of him. I think he's done nothing but move forward.”

Tacitus, compromised by circumstances in his last two, is eligible to improve with blinkers added in the Travers. Runner-up in the Belmont after enduring a wide trip, the Juddmonte homebred took a nosedive out of the gate in the Jim Dandy (G2) and did well to take second to Tax.

The Bill Mott pupil worked well in blinkers on August 17, firing a bullet five-eighths in 1:00.48 over the Oklahoma training track and leaving behind companion Seismic Wave who clocked 1:00.92.

“It was what we were looking for,” jockey Jose Ortiz said. “He was a bit more focused with the blinkers. There was a loose horse, so we pulled up at the quarter-pole and when he galloped to the seven-furlong (pole) he was very focused. Before, he used to look around and play around, but he doesn't do that now, so that makes me more confident. He worked unbelievable. He has a nice way that he goes, he can do 12s (seconds per furlong) the whole way around there."

Mott also liked how Tacitus responded to the blinkers.

“I think the blinkers seem as though they helped him focus a little bit,” the Hall of Famer said. “Even in the workout, it looked like his head carriage was a little more straight and level. Does he absolutely have to have them? Maybe not. But if they help him an inch it'll be worth it. The good thing is that they didn't make him anxious or rank. They just helped him focus through the stretch."

Tax hadn’t beaten Tacitus until the Jim Dandy, but trainer Danny Gargan believes he’s a different animal now from earlier in the season. Jockey Irad Ortiz Jr. steered Tax through his last major work, a half-mile bullet in :47.33 – the fastest of 64 at the distance over Saratoga’s main track August 16.

"We tucked him in behind a horse and we got some other company in the middle of it and he went to the rail and just went right on about his business. I was really happy," Gargan said. "Irad said he's getting stronger and bigger and faster. We're really happy with how he's doing. He seems to be blossoming at just the right time. He was bucking and squealing coming off the track. It was a big-time work. He worked in :47, and (galloped) out three-quarters in 1:12.4.

"He looks great after the work. This is the fittest we ever had him. This winter we missed a lot of training due to weather and a few things here and there, but he's fit now. I don't know if we can win the Travers, but we're going to show up and run good.

"If he runs big in this race he'll start getting credit. I just know at some point, if somebody is going to beat him, they'll have to pass him a hundred yards before the wire because he's going to be there."

Mucho Gusto , most recently a hard-trying second to Maximum Security in the Haskell Invitational (G1), convinced Hall of Famer Bob Baffert to add him to the Travers fray with a sparkling work on Monday. At his summertime base of Del Mar, he ripped five furlongs in a bullet :59.20.

"He came out of the Haskell really well,” Baffert said, “and he breezed this morning, and went really well, really strong. When they work like that, I like to run them the next week.

"With that work, he punched his own ticket to the Travers. We think he's ready to do something big."

Baffert initially planned to be here with champion Game Winner, who unfortunately came down with a virus that ruled him out. Mucho Gusto thus has the look of a backup player thrown into the big game, but his honesty and consistency are commendable.

Everfast is anything but consistent. Since his surprising second at 39-1 in the Preakness, the Dale Romans trainee relapsed to seventh in the Belmont and a distant fourth in the Haskell.

"I would have like to see him finish stronger," Romans admitted, "but he still picked up a nice check. He's proven he can run with these horses, although he hasn't proven he can beat them. But he keeps knocking at the door, and eventually, it will open."

Everfast, who posted a five-furlong work at the Spa in 1:00.23 on August 17, will have a new rider – top Peruvian jockey Martin Chuan. Romans’ son, Jacob, is Chuan’s agent.

"I think he's an excellent rider; he's the king of South America," the trainer said. "I think he's going to be on par with the Ortiz brothers someday. He's intelligent, well-grounded…I think he can really ride and I know I'll get 100 percent effort with a horse who'll be a bit of a price."

Preakness third Owendale, who arguably could have gone much closer if not for a wide trip at Pimlico, captured the Ohio Derby (G3) in his only ensuing start.

"The more we thought about it, the more we thought this," trainer Brad Cox said of the Travers decision. "There is a bigger purse. It is a more prestigious race. It is a mile and a quarter. He runs like he is a mile and a quarter horse. If it is a good set up, it is possible. The numbers suggest our horse is a bit fast or just as fast any of these. If he can run his Preakness race or the Lexington (G3) race (he won), he is going to be in the mix."

Owendale zipped five-eighths in a bullet :58.80 in his penultimate move August 3, then polished off his preparations with a half in :48.80 August 17, both at Churchill Downs.

"I feel like he is coming into this one just like he did in the Preakness," Cox added. "We expected a big effort out of him in the Preakness. He's a horse who appreciates time in between starts. Probably his best race this year has been the Lexington. He had time between the Risen Star (G2) (where he was a subpar eighth) and the Lexington."

Laughing Fox has likewise run once since the middle jewel of the Triple Crown, following up his fifth in the Preakness with a fourth in the Jim Dandy. Trained by Hall of Famer Steve Asmussen, he turned in a typical move for that barn when breezing a half-mile on the Oklahoma Monday in :50.15.

Trainer Chad Brown’s lightly raced duo are taking a class hike from the July 26 Curlin S. at Saratoga, where Highest Honors swept from last to first and favored stablemate Looking at Bikinis tired to third after setting the pace. Each was making his stakes and two-turn debut on .

Highest Honors, a Farish homebred like Code of Honor, negotiated five furlongs in 1:01.66 on the Spa main track August 17.

"He went super," Brown said. "It was a nice little maintenance move. He galloped out strong and came back with a lot of energy.

"He's been looking for a mile and a quarter for some time,” he added of the Tapit colt. “I know he's lightly raced and lacks some experience, but I'm confident the distance will suit him."

Looking at Bikinis, who had been two-for-two going into the Curlin, clocked 1:00.85 also August 17.

"He bounced out of the Curlin well," Brown said. "We only wanted to go onto this race if he trained well and he has. I'm hoping his performance last time was compromised by the wet track. Hopefully, if the conditions are dry, he can work out a better trip and we'll see his previous form."

Godolphin’s homebred Endorsed, runner-up in the Curlin, is in part taking his chance because of the defections of Game Winner and Maximum Security. But trainer Kiaran McLaughlin also noted that the 1 1/4-mile distance should suit the son of Medaglia d’Oro.

Endorsed toured a half-mile over the Oklahoma Monday in :50.74.

Trainer Dallas Stewart made similar comments about Chess Chief , best of the rest behind the streaking Mr. Money in the West Virginia Derby (G3) last out.

"He ran big going a mile and an eighth and I thought a mile and a quarter would suit him," Stewart said. "It's a big race and a couple of the heavy favorites aren't going, so we're giving it a shot.

"He ran a good second last time in the West Virginia Derby behind a really nice horse, so he's getting better. He's a late-developing colt by Into Mischief, who is a great sire. The Travers is one of the great American races and we're hoping he'll like the distance."

Chess Chief blitzed a bullet half in :48.00 at Churchill Downs Monday, tying with workmate Twelfth Labour who’s set for the H. Allen Jerkens Memorial (G1) on the Travers undercard.

"He worked great. They worked head-and-head together," Stewart said. "Mike Smith is going to ride him in the Travers."

Trainer Stan Hough, whose Jim Dandy third Global Campaign is on the sidelines, swings for the fences with Scars are Cool. The Malibu Moon colt appreciated the stretch-out to break his maiden convincingly over 1 1/8 miles on this track.

"It's great. I thought my first (Travers) starter was going to be Global Campaign, but it's exciting to see what he can do," Hough said. "He's always been nice. As a two-year-old, he got hurt, but he looked like he was going to be a nice horse. Each race, he's improved. But in his race here, he looked really good."

The Travers field will be finalized Tuesday, and post positions will be drawn at 6 p.m. (EDT) at the Adelphi Hotel in Saratoga Springs.