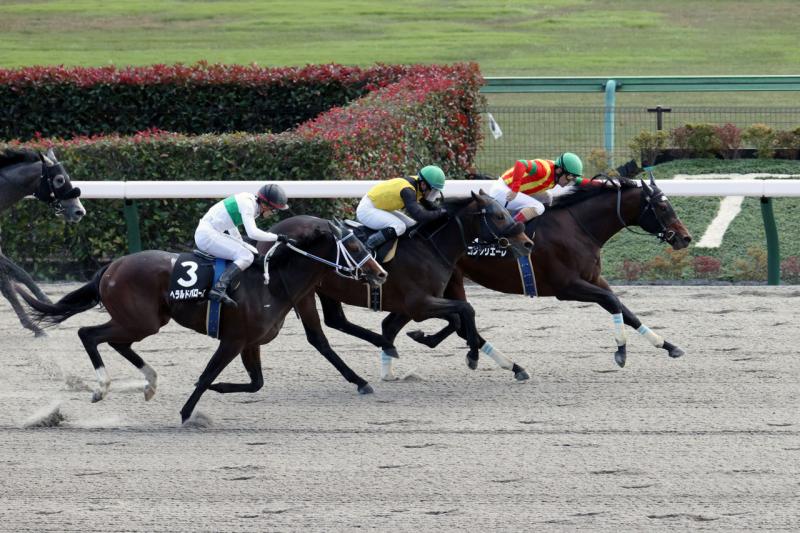 The 7-10 favorite after a runaway debut score, Consigliere improved his record to 2-for-2 in Saturday’s Cattleya Stakes at Tokyo. The margin was much closer, but sufficient to bank 10 points and take early control of the Japan Road to the Kentucky Derby.

Leading jockey Christophe Lemaire picked up the mount on Consigliere, who had not raced since conquering an about 1 1/8-mile newcomers’ event at Niigata on Aug. 22. Trained by Yukio Inagaki for owner/breeder Kazumi Yoshida, the promising colt was cutting back in trip to a metric mile while stepping up in class here.
Consigliere broke from post 10 in a 15-horse field and settled a few lengths behind the leaders. Clos de Mesnil showed the way from fellow filly Love Pyro, with Best Regard stalking. As Best Regard challenged turning for home, Consigliere smoothly advanced on the outside to join the fray. The favorite always appeared to have the upper hand, and he gradually edged away from the weakening pace factors in the stretch.
The dangers emerged from behind. World Connector made a brief move on the inside with Ryan Moore, while Cafe Karma and Geraldo Barows closed faster on the outside to make it a three-way finish. Consigliere kept his neck in front of Cafe Karma, who was in turn a neck up on the barreling Geraldo Barrows, in a final time of 1:38.0.
Cafe Karma earned four points for his runner-up effort. Geraldo Barows got two points, and World Connector, another 2 1/2 lengths back in fourth, received one point. El Paso kicked into gear too late in fifth, followed by Copano Nicholson, Line of Soul, Marubutsu Pride, Peisha Es, Sekkachi Cane, Best Regard, Clos de Mesnil, Barrel Zone, Suzuka Kotekitai, and Love Pyro.
Consigliere was bred by Northern Farm in Japan but sports an American pedigree. He is from the first crop of champion Drefong, hero of the 2016 Breeders’ Cup Sprint (G1). Himself a son of triple Eclipse Award winner Gio Ponti, Drefong is out of a mare by Hall of Famer Ghostzapper.
Consigliere’s dam, Tasha’s Star, is by Spanish Steps (a full brother to Unbridled’s Song), from the family of 2016 Mother Goose (G1) winner Off the Tracks and Grade 2 scorer Concord Point. Tasha’s Star, a half-sister to multiple Grade 3 victress Tasha’s Miracle, has also produced Japanese stakes heroine and Grade 2-placed Esmeraldina.

The second scoring race on the Japan Road, the Zen-Nippon Nisai Yushun at Kawasaki, is scheduled for Dec. 15.