Courvoisier comes of age in Jerome 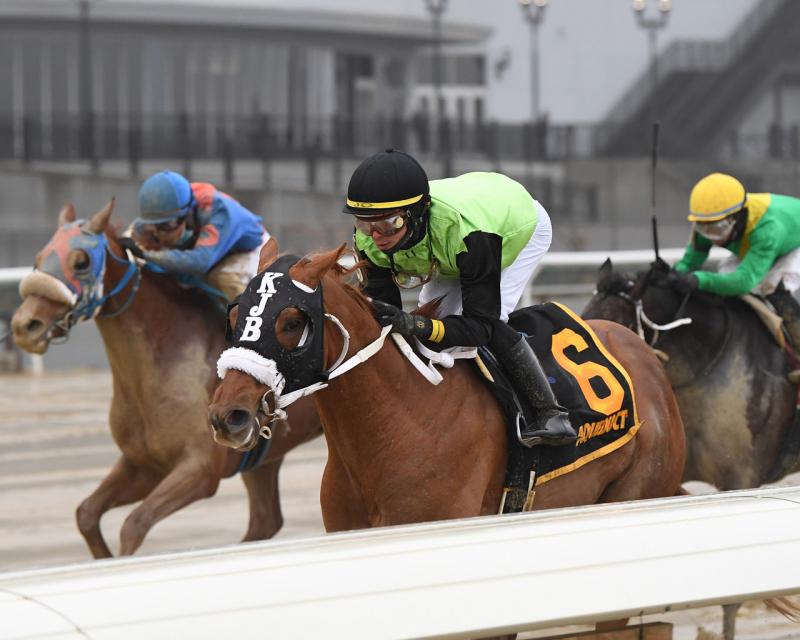 With a pedigree as rich as his cognac namesake, Courvoisier splashed into the Kentucky Derby (G1) picture in Saturday’s $150,000 Jerome S. at Aqueduct. The son of Tapit and champion Take Charge Brandi tracked the pace and drove clear in the slop to earn 10 Derby points.

Trained by Kelly Breen for co-breeder Hill ‘n’ Dale Equine Holdings and James D. Spry, Courvoisier was cutting back in distance from a 1 1/8-mile maiden score here Dec. 2. The 4-1 third choice continued his progress by coping just fine with the one-turn mile versus better competition in this stakes debut.
“I was a little bit concerned,” new rider Jose Ortiz said of shortening up in trip. “Personally, I’m not a fan of stretching to a mile and an eighth and cutting back to a mile, but he’s sharp. He’s got tactical speed - which helps him - and I think those kinds of horses you can play around with them. He’s the right kind of horse to do it and he did it successfully, so kudos to Kelly and the team.”
As expected, Hagler sped to the early lead from his outside post. Courvoisier, fourth through the opening quarter, advanced into a stalking second down the backstretch. Although Ortiz had to ask him to raise his game on the turn, the royally-bred colt kept finding more the farther they went. Courvoisier overtook a tiring Hagler in midstretch and prevailed by 1 1/4 lengths in 1:38.86.
“Passing the three-eighths pole,” Ortiz said, “I had to ask him a little bit but Kelly gave me the warning – he said, ‘he’s not going to give you anything you don’t ask for, so you have to keep pedaling and he will dig in.’ And he did. He kept digging in and I’m just happy we got the win.”
Smarten Up rallied from last to take second, outperforming his 21-1 odds and picking up four points. Cooke Creek, the 1.45-1 favorite, was third at every call, an effort good for two points. Slow-starting Unbridled Bomber took home one point for his fourth-place finish. Next came Hagler; Remsen (G2) fourth Mr Jefferson, who was never involved; turf performer Ohtwoohthreefive; and Rumble Strip Ron.
Courvoisier now sports a record of 5-2-2-1, $147,450. Third in his sprint debut at Monmouth Park, Courvoisier was second in a pair of Delaware Park maidens. The chestnut came close in a photo-finish loss when first adding blinkers, then battled to victory at Aqueduct last out.
“He does everything right,” Breen said following the Jerome. “He just needed to put it all together. He was being very juvenile in his first couple of races (before adding blinkers) and I think this is the beginning of him moving forward.”
Bred by Elevage II and Hill ‘n’ Dale in Kentucky, Courvoisier was sold as a weanling as part of the Elevage dispersal at Keeneland November. Hill ‘n’ Dale purchased the colt for $600,000 and re-offered him as a September yearling at the same venue, but retained him when bidding stopped at $275,000.
Courvoisier’s dam, Take Charge Brandi, was voted champion two-year-old filly after stunning the 2014 Breeders’ Cup Juvenile Fillies (G1) and adding the Delta Downs Princess (G3) and Starlet (G1). By Giant’s Causeway, Take Charge Brandi is a half-sister to multiple Grade 1-winning millionaire Omaha Beach, scratched as the early favorite for the 2019 Kentucky Derby.
This is the family of champion Will Take Charge, Grade 1 winner Take Charge Indy, and current multiple Grade 2 scorer As Time Goes By, descending from $2.4 million-earner and Broodmare of the Year Take Charge Lady.
Breen indicated that the Feb. 5 Withers (G3), back up to the distance of his maiden win, is next for Courvoisier.
“Right now, it looks like he has a nice affinity for Aqueduct,” his trainer said, “and in four more weeks is the Withers going two turns. We’re excited for it because it’s where we were pointing him.
“We didn’t know if we were even going to run in the Jerome because we believe he is a two-turn horse.” 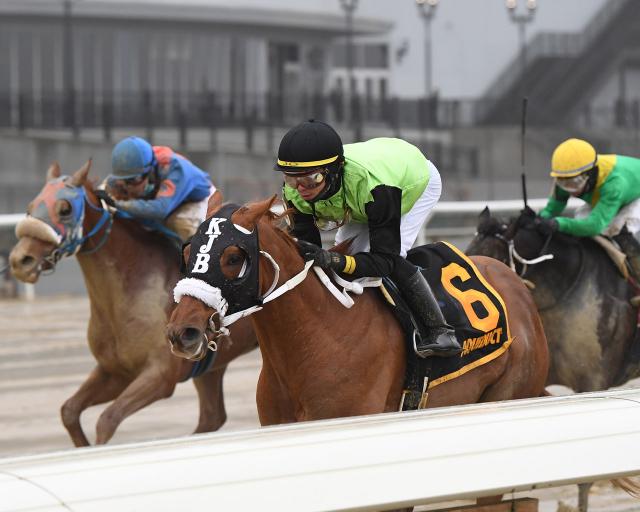