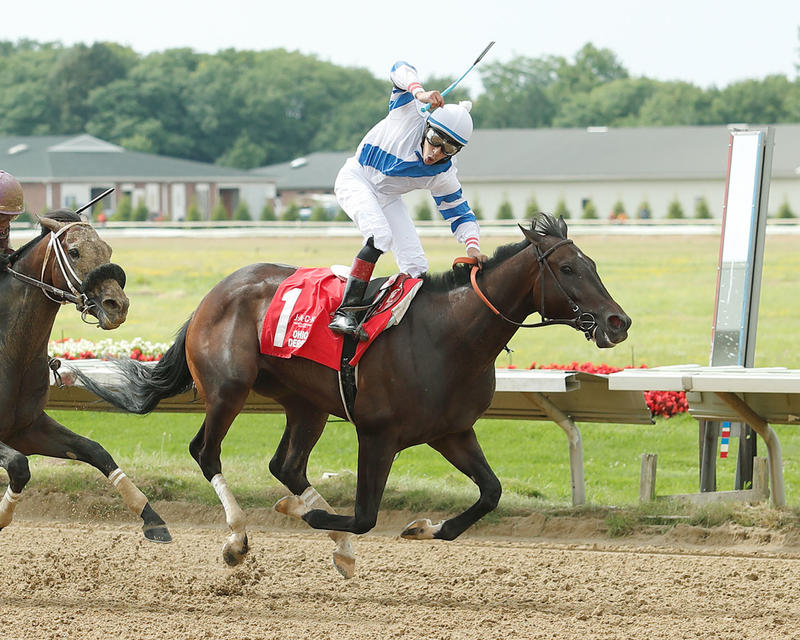 Dean Martini surged to a clear lead leaving the far turn and held late to post a 14-1 upset in Saturday’s $500,000 Ohio Derby (G3) presented by TwinSpires at Thistledown. Claimed two starts previously, the 3-year-old was making his stakes debut for owner Raise the Bar Racing and trainer Tom Amoss, and Ricado Meijas picked up the mount on the front-running gelding.

With the Kentucky Derby being postponed until Sept. 5, the Ohio Derby was added a qualifier this year and awarded points on a 20-8-4-2 scale to the top four finishers. However, Dean Martini wasn’t nominated to the Triple Crown, and connections will have to pay a hefty supplemental fee to claim the points towards a Derby berth.

Dean Martini, who broke on top but dropped back to closely stalk pacesetter Lebda, advanced along the rail to retake the lead on the far turn and entered the stretch with a widening advantage. South Bend, who was off at 6-1, made up a lot of ground from well off the pace in the latter stages to miss by three-quarters of a lengths in second.

It was another two lengths back to two-year-old champion and 2.40-1 favorite Storm the Court, who was never a factor checking in third. Rowdy Yates came next in fourth and was followed by 3-1 second choice Sprawl, Lebda, Rogue Element, Unrighteous, Informative, Bear Alley, Code Runner, Established, and Dack Janiel’s.

By Cairo Prince, the dark bay made his first seven starts against maiden special weight foes, recording six placings, before dropping into a $50,000 maiden claiming event at Churchill Downs on May 17. Dean Martini was haltered from the 6 3/4-length win, and was exiting a runner-up effort in an entry-level allowance on June 12. He’s now earned $391,380 from a 10-2-4-3 record.