His juvenile championship aspirations were snuffed out when he botched the break in last fall's Breeders' Cup Juvenile (G1) as an odds-on favorite, but Dennis' Moment can keep his and his connections' Kentucky Derby (G1) hopes alive on Saturday when he makes his 3-year-old debut in the $400,000 Fountain of Youth (G2) at Gulfsteam Park.

The Fountain of Youth, at 1 1/16 miles, awards qualifying points of 50-20-10-5 to the top four finishers as part of the Road to the Kentucky Derby series. The winner is virtually guaranteed a spot in the starting gate on the first Saturday in May, and Dennis' Moment drew well in post 5 as the 2-1 morning line favorite.

Others, however, were not so fortunate. Multiple stakes winner Chance It, Holy Bull (G3) runner-up Ete Indien, and Remsen (G2) victor Shotski, all of whom tend to show early foot, drew the widest posts in the field of 12 as four longshots not expected to enter did so. The connections of some might be contemplating scratching from the Fountain of Youth.

That's certainly not the case for Dennis' Moment, who's had more than his share of bad luck in just four starts. After losing his rider soon after the start of his debut, he rebounded to break his maiden by more than 19 lengths and then impressively captured the Iroquois (G3) under the Twin Spires. However, he never recovered from his stumbling start in the Breeders' Cup at Santa Anita, trailing the field all the way around.

Chance It was a game head winner of the Mucho Macho Man S. in early January over As Seen On Tv when last seen, while Ete Indien was easily second best to Tiz the Law in the Holy Bull. Shotski shortens up after finishing second in the nine-furlong Withers (G3) after setting a contested pace. Another to look out for is Country Grammer, who graduated at Aqueduct going 1 1/8 miles in November for Chad Brown.

The Fountain of Youth is the finale on a marathon 14-race card at Gulfstream. The scheduled post time is 6:04 p.m. (EST), and can be watched and wagered on at TwinSpires.com. 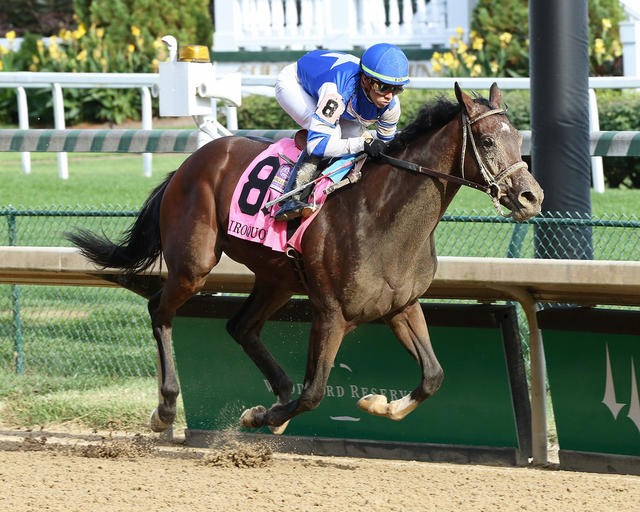