Destin lit up the Tampa Bay Downs main track Saturday with a stakes and track-record performance in the $350,000 Tampa Bay Derby (G2).

Guided by Javier Castellano, the gray son of Giant's Causeway was a stalking third behind fellow Todd Pletcher trainee Outwork through splits of :24.04, :47.88, and 1:11.43. Advancing to challenge that one passing the quarter pole, Destin finally wore down Outwork in the final sixteenth to post a one-length victory in a time of 1:42.82. He paid $9.60 to win.

Owned by Twin Creeks Racing Stable, Destin earned 50 qualifying points toward Kentucky Derby eligibility as part of the Road to the Kentucky Derby series. He had earned one point for a fourth-place finish in the Lecomte (G3) at Fair Grounds in January, and in between registered a victory in the Sam F. Davis (G3) at Tampa Bay Downs, a non points-scoring race.

The previously undefeated Outwork fared well in his two-turn debut, finishing seven lengths clear of third-place finisher Star Hill. They earned 20 and 10 eligibility points, respectively. Brody's Cause, hero of the Breeders' Futurity (G1) and third in the Breeders' Cup Juvenile (G1) in his last two starts, trailed most of the way and finished seventh in the field of nine.

Destin, a full brother to Grade 1 winner and classic-placed Creative Cause, has now earned $390,700 from a line of 5-3-1-0. Pletcher said after the race Destin could be pointed to the Wood Memorial (G1), Blue Grass (G1) or Arkansas Derby (G1) for his final Kentucky Derby prep. 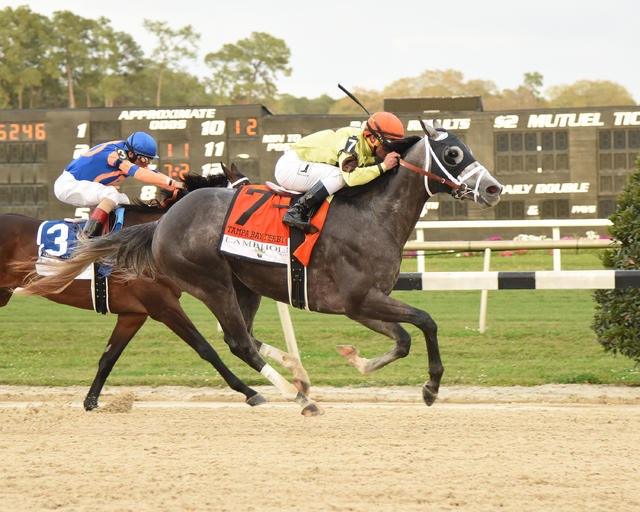