Down on Da Bayou has big fun in UAE Oaks 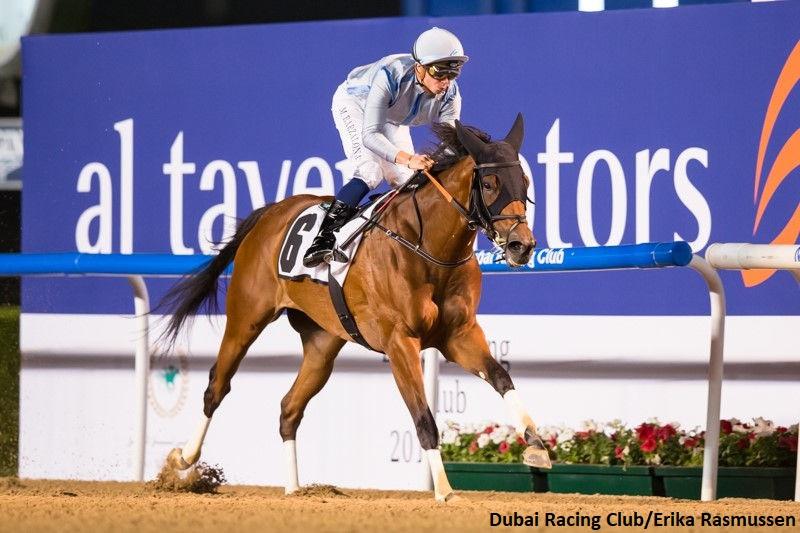 Four years after her half-sister Polar River captured the UAE Oaks (G3), Down on Da Bayou romped in Thursday’s $250,000 renewal while rewriting the stakes record book. The Kentucky-bred not only turned in the best time in the race’s history since its move to Meydan in 2010, but she also ran up her winning margin to a record 18 1/2 lengths.

Trained by Salem bin Ghadayer for Sheikh Hamdan bin Mohammed al Maktoum, Down on Da Bayou brought a quite different profile from Polar River. Her famous half-sibling was unbeaten through the 2016 Oaks, where she went off heavily favored following a dominant success in the UAE 1000 Guineas.

Down on Da Bayou, on the other hand, was coming off a pair of seconds in both the trial and the Guineas. The daughter of 2010 Kentucky Derby (G1) hero Super Saver improved markedly on the step up in trip for the about 1 3/16-mile Oaks, and comprehensively turned the tables on Guineas heroine Dubai Love.

Under Mickael Barzalona, Down on Da Bayou showed her typical speed to lead the way. Godolphin’s Dubai Love, the favorite, stalked, but well-backed Japanese shipper Serein was out of position early after a hop at the start. Although Serein worked her way into a close third by the time they left the backstretch, she had expended too much energy to sustain her move.

Dubai Love was poised on Down on Da Bayou’s flank on the far turn, but the margin was deceptive. The favorite was already being driven along, while Down on Da Bayou was still traveling very easily on the bridle. Swinging for home, there was no doubt of the result as Down on Da Bayou opened up and went on to clock 1:58.35. If the time was nowhere near the track record of 1:55.18 set by Mendelssohn in the 2018 UAE Derby (G2), it was more than a second faster than the previous Oaks mark of 1:59.66 held by 2018 winner Rayya.

Down on Da Bayou earned 50 points toward the Kentucky Oaks (G1). Connections sounded more inclined to wheel her back for the Feb. 29 Saudi Derby, part of the inaugural Saudi Cup Day at King Abdulaziz Racecourse in Riyadh.

“It’s an owner’s decision,” bin Ghadayer said of the Saudi option. “We entered her in the Saudi Derby and I asked my boss if we should go to this race and he said no problem.

“The next and last step for her this season I think will be next week (in Saudi Arabia). The short time, but she always recovers quickly. One day after a race, she needs two persons (to lead her). I hope everything goes well and she’ll be fine and sound and in good health.”

Dubai Love held second by 4 1/2 lengths, good for 20 points. Considering her turf pedigree and classic engagements in Europe, it would be a surprise if she enters Kentucky Oaks calculations.

Third-placer Serein, who deposited 10 points, very much has designs on Churchill Downs. Ironically, she represents the same team as Lani, who upset Polar River in the 2016 UAE Derby en route to a creditable U.S. Triple Crown campaign. A Koji Maeda colorbearer trained by Mikio Matsunaga, Serein was planning to use the Oaks as a springboard to the March 28 UAE Derby, and this experience could prove beneficial on Dubai World Cup night.

Scandinavian-based Ascot Brass checked in another 1 1/4 lengths back in fourth and took home 5 points. Her stablemate Careless Whisper was a long way adrift in fifth, and Tapi Sioux trailed.

Down on Da Bayou has compiled a record of 5-2-2-0, $249,653, exclusively on the Meydan dirt. Out of the Empire Maker mare Bayou Tortuga, she sold to Ireland’s Tally Ho Stud for $150,000 as a Keeneland September yearling. Tally Ho offered Down on Da Bayou at last May’s Arqana Breeze Up Sale, where Rabbah Bloodstock purchased her for €190,000 (approximately $213,389). 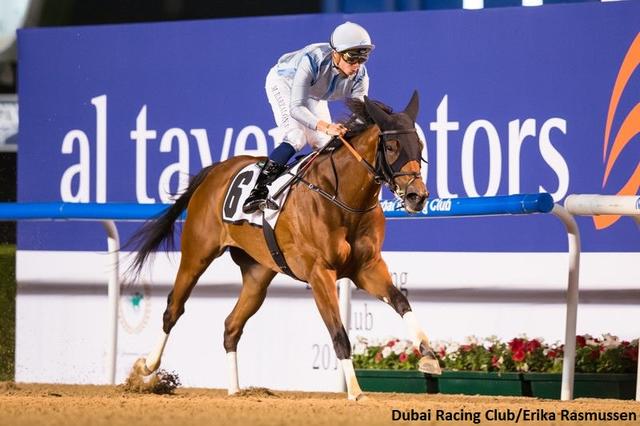