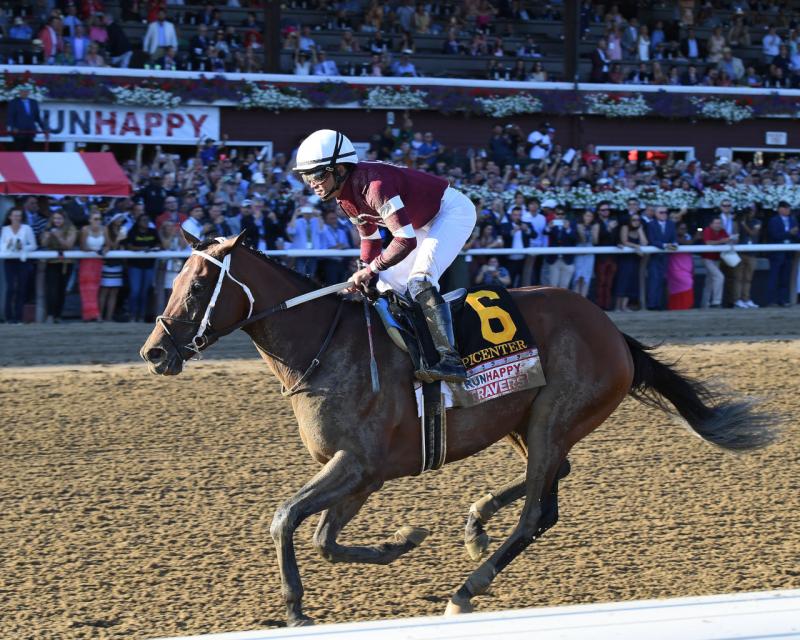 Winchell Thoroughbreds’ Epicenter confirmed himself as the leading three-year-old male by romping in Saturday’s $1.25 million Travers (G1) at Saratoga. The even-money favorite stormed past Cyberknife and drew off by 5 1/4 lengths, putting himself in pole position for championship honors.

“I thought that answered a lot of questions,” trainer Steve Asmussen said. “His resume looks very good, and we’re willing to run against them again.”
Epicenter has now avenged his losses in both the Kentucky Derby (G1) and Preakness (G1), where difficult trips contributed to his runner-up efforts as the favorite. Derby upsetter Rich Strike could get no nearer than fourth in the Travers. Preakness winner Early Voting was last behind Epicenter for the second straight race, after trailing in the local Travers prep, the Jim Dandy (G2).
Under regular rider Joel Rosario, Epicenter was well placed in a ground-saving fourth early, a couple of lengths behind front-running Cyberknife. The rail-drawn Cyberknife was prompted by Ain’t Life Grand, while Early Voting flanked Epicenter in the next flight.
Rounding the far turn, Cyberknife pulled away from a weakening Ain’t Life Grand, but his isolation was brief. Epicenter advanced in a flash and angled out to tackle Cyberknife. Although the 9-2 second choice tried to resist, he couldn’t match the favorite’s kick down the stretch.
Epicenter stamped his superiority in a final time of 2:00.72, earning an overdue Grade 1 breakthrough and handing Hall of Famer Asmussen his first Travers win.
“It was really gratifying,” said Asmussen, who had previously placed in the Travers with the Winchells’ runner-up Midnight Bourbon (2021) and third Gun Runner (2016).
“We walked over today with a tremendous amount of confidence in the horse, but definitely remember we felt exactly that way walking over for this year’s Derby. He was away cleanly and thought he was very comfortable and attending close enough to the pace, and just ran a very dominating performance against a very good group.
“Beforehand, there was a lot of concern about who was going to be on the lead,” Asmussen added. “Early Voting appeared to have the most pace, but they definitely did not want to be on the lead this time. Off of that there was a concern how much pace there would be, but Joel (Rosario) handled Epicenter. He was away clean and in the rhythm he wants to be in, and I thought he finished up the mile and a quarter very strong.”
Cyberknife, the winner of the Arkansas Derby (G1) and Haskell (G1), gamely held second in a three-way tussle with Zandon and Rich Strike. Zandon was a neck up on Rich Strike, who rallied well and didn’t miss second by much. Another 4 3/4 lengths back in fifth came Gilded Age, followed by Artorius, Ain’t Life Grand, and the eased Early Voting.
Epicenter has bankrolled $2,940,639 from a record of 10-6-3-0. By the Giant’s Causeway stallion Not This Time, Epicenter nearly swept the Fair Grounds Road to the Derby, only nipped in the Lecomte (G3). He rolled in the other three points races at the historic New Orleans venue – the Gun Runner S., Risen Star (G2), and Louisiana Derby (G2) in track-record time – to emerge as the Kentucky Derby favorite. After his frustration in the first two jewels of the Triple Crown, Epicenter roared back to turn the Jim Dandy/Travers double.
The next challenge is to face older horses, with his main aim the Breeders’ Cup Classic (G1). Asmussen indicated that Epicenter has the option of training up to the Nov. 5 championship at Keeneland. 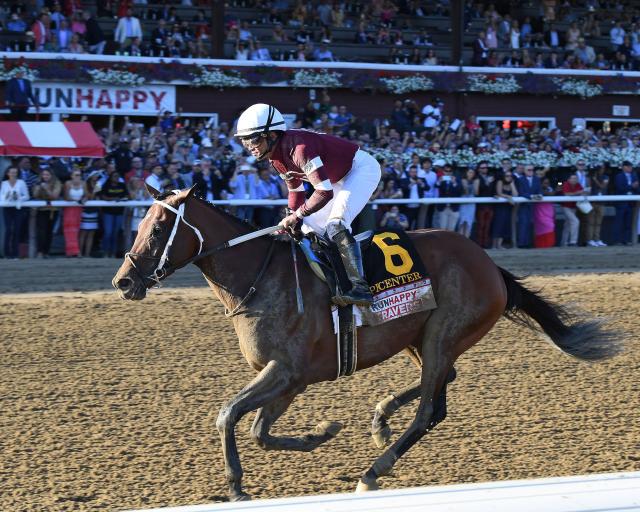