Ete Indien's path to Saturday's $400,000 Fountain of Youth (G2) wasn't easy, but the Summer Front colt made it look so once the gates sprung open as he dominated the Road to the Kentucky Derby test by 8 1/2 lengths.

Runner-up to Tiz the Law in the Feb. 1 Holy Bull (G3) in his most recent start, Ete Indien was in need of a new rider for the Fountain of Youth, in this case Florent Geroux, after the recent injury to regular rider Luca Panici. And at Wednesday's post position draw, Ete Indien was stuck with one of the widest posts, generally a major disadvantage going 1 1/16 miles at Gulfstream.

Breaking from post 10, Ete Indien was hustled hard by Geroux at the start, crossed over and made the lead entering the first turn. That, and little pressure applied by others, resulted in a comfortable win.

Setting honest splits of :23.14, :46.72, and 1:11.30, Ete Indien proved to have plenty left and opened up on the field through the stretch despite bearing about a bit when clearly in front.

Owned by Linda Shanahan, Sanford Bacon, Dream With Me Stable, Horse France America, D P Racing, and trainer Patrick Biancone, Ete Indien covered the distance over a fast track in 1:43.02 and paid $8.60 as the 3-1 third choice. There was a blanket finish for second, with Candy Tycoon edging As Seen On Tv and Shotski.

The disappointment in the field was 6-5 favorite Dennis' Moment, who trailed the field of 10. It was the colt's second last-place finish in succession following his odds-on defeat in last fall's Breeders' Cup Juvenile (G1) after a stumbling start.

Ete Indien earned an additional 50 Derby qualifying points for the win, virtually ensuring his participation in the Run for the Roses now that he has 54 points in total. Candy Tycoon and As Seen On Tv earned their first 20 and 10 points, respectively, while Shotski now as 19 points total.

Ete Indien is the second leading Kentucky Derby candidate this year for Biancone, whose most noted training achievement was conditioning 1983 Horse of the Year All Along. He also trains Sam F. Davis (G3) winner Sole Volante, who will race in next week's Tampa Bay Derby (G2).

"I think he's an exceptional horse, and we look forward to the future," said Biancone of Ete Indien.

Bred in Kentucky by Robert Tillyer and Eric Buckley, Ete Indien was an $80,000 Keeneland September purchase. He was reared by East India, by Mizzen Mast. 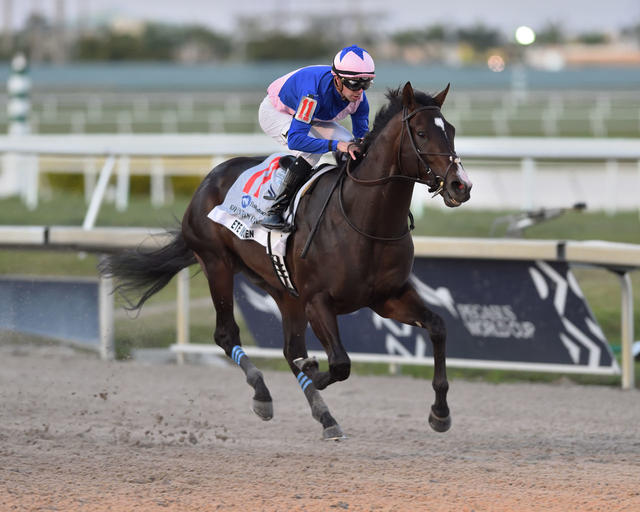