Ethereal Road Out, Rich Strike Is In

There was one defection from the Kentucky Derby field Friday morning as Julie Gilbert and Aaron Sones’ Ethereal Road was declared out of the race.

That opened the door for RED TR-Racing’s Rich Strike who will start from post 20 under Sonny Leon for trainer Eric Reed.

On Saturday morning, the track will open for training for all horses from 5:15-7:15 (all times Eastern). There will be a renovation break from 7:15-7:45 followed by training for Kentucky Derby horses from 7:45-8.

BARBER ROAD – William Simon’s Barber Road went out to gallop 1 ½ miles at 5:45 a.m. with regular rider Elexander Aguilar aboard after trainer John Ortiz decided to call an audible when the track wasn’t sloppy. He originally had been planning to have a walk day with his Arkansas Derby (GI) runner-up because of the weather forecast.

Ortiz was en route to Hot Springs, Arkansas, Friday morning where he will saddle The Mary Rose in the $150,000 Natural State Stakes at Oaklawn Park before returning to Louisville Friday night.

CHARGE IT, MO DONEGAL, PIONEER OF MEDINA – It was the final step down the Derby road for trainer Todd Pletcher and his trio of Derby colts Friday morning when they went out during the special Derby/Oaks training session between 7:45 and 8. In a good omen for all just then, the sun popped through a cloud-covered sky that was supposed to be delivering a day’s worth of rain.

His trio went trackside through the five-furlong gap at 7:45 and soon were backtracking to the finish line before going on gallops that took them for about a mile and a quarter around the big Churchill racetrack. Hector Ramos was aboard Charge It; Amelia Green was the pilot on Mo Donegal, and Carlos Perez was steering Pioneer of Medina.

Earlier, Pletcher had said he was happy with the way he was coming up to the Run for the Roses.

“It has been a good week for these colts,” the Hall of Fame trainer said. “Works and gallops have gone well, their gate standing was good, they paddocked well. I’m happy with it all.”

CROWN PRIDE (JPN) – Teruya Yoshida’s Crown Pride (JPN) jogged for 15 minutes in the mile chute and then had the track all to himself as he jogged a quarter of a mile before returning to the Quarantine Barn under regular morning partner Masa Matsuda.

A winner of three of four career starts, Crown Pride will break from post seven under Christophe Lemaire.

Crown Pride is not expected to go to the track in the morning.

Trainer Koichi Shintani was asked how he would like to see things unfold in the Run for the Roses.

“I want to see the same race start to finish that we saw in the UAE Derby,” Shintani said of the colt’s Grade II victory in his most recent start. “Including being first across the wire part.”

CYBERKNIFE, TAWNY PORT, ZOZOS – Two-time champion trainer Brad Cox sent all three of his Kentucky Derby hopefuls to the track to train at 7:45 a.m. during the special training time just for Derby and Oaks horses.

EPICENTER – Winchell Thoroughbreds’ Epicenter kept to his morning ritual of an early 5:30 exercise, jogging a mile under Roberto Howell around the sealed track.

Trainer Steve Asmussen will be going for his first Kentucky Derby victory and jockey Joel Rosario his second after having scored with Orb in 2013.

Epicenter will break from post three, a spot that last produced a Derby winner in Real Quiet in 1998.

ETHEREAL ROAD – Aaron Sones and Julie Gilbert’s Ethereal Road has been scratched from the Kentucky Derby, allowing Rich Strike to draw into field.

HAPPY JACK – Kentucky Derby longshot Happy Jack put in his final preparations for the mile and one-quarter classic Friday morning at 5:40 on a muddy and sealed racetrack at Churchill Downs. Rain had been predicted to fall all day in Louisville, but the skies were dry then and both man and beast appreciated the break.

‘Jack’ had his regular guy, Tony Romero, along for the exercise and the Oxbow colt jogged an easy mile.

Both trainer Doug O’Neill and his assistant, Leandro Mora, were on hand to watch the move and Mora talked about how the Calumet Farm homebred was easy on himself.

“Some horses, they sleep standing up,” he said. “I think that’s got to take a toll on their legs eventually. But this horse, he lays right down. He’ll go back to the barn now and he’ll have a nap for two or three hours. He lays down to sleep at night, too. He’s good to himself.”

O’Neill, who already has two Derby tallies on his scorecard (I’ll Have Another in 2012 and Nyquist in 2016) is hoping for No. 3. “Touch wood,” the conditioner said, “we’re going to shock the world.”

MESSIER, TAIBA – Trainer Tim Yakteen divided the Derby load Friday morning, going out early with the Empire Maker colt Messier, then waiting and going for the special 7:45 to 8 Derby/Oaks training session with Taiba.

He had Messier go to the track at 5:15 with exercise rider Beto Gomez in the tack. They went for a gallop of about a mile and three-eighths.

Gomez reported that he liked what he felt underneath.

“He’s feeling good,” the veteran rider said. “When you’re coming up to a race like this, you want them to be feeling the way he is.”

At 7:45, the Gun Runner chestnut Taiba, winner of the Santa Anita Derby (GI), went through the five-furlong gap and on to the racetrack, again with Gomez. They proceeded to go for a strong gallop of a mile and a quarter that the rider termed “very good,” as they headed back to Barn 37.

Joining Yakteen on the backstretch Friday morning was his wife, Millie Ball, a notable horsewoman in her own right and a popular racing commentator on several racing networks. She had flown in from Los Angeles Thursday and brought the couple’s two teenage sons along.

“I had to bring them,” she said. “Here their father is saddling two horses in the Kentucky Derby. And you just never know in this game if he’ll be back. This will be an experience they’ll never forget."

Yakteen was asked what has been the most fun for him this past week at Churchill.

“The most fun for me has been that everything has gone smoothly,” he said. “No surprises; I didn’t want any surprises.”

RICH STRIKE – There will be no Plan B for RED TR-Racing’s Rich Strike.

After Rich Strike galloped a mile and half under Gabriel Lagunes, trainer Eric Reed learned from the stewards that Ethereal Road had been declared out of Saturday’s Kentucky Derby opening a spot in post 20 for Rich Strike.

Sonny Leon will have the mount on Rich Strike who was claimed by Reed for $30,000 after winning a maiden race here going a mile in September by 17 ¼ lengths. In his most recent start, Rich Strike finished third in the Jeff Ruby Steaks (GIII) at Turfway Park.

So, from post 20, what’s the ideal scenario for Rich Strike tomorrow?

“Get a good break and work over to the inside,” Reed said. “Start picking them up midway on the backstretch and then pass them all before the finish line!”

SIMPLIFICATION – Tami Bobo’s Simplification galloped a mile and a half under Ismal Ramirez and is expected to go to the track Saturday morning for trainer Antonio Sano.

Winner of the Fountain of Youth (GII), Simplification represents the second Derby starter for Sano whose Gunnevera finished seventh in the 2017 Run for the Roses.

“I’d like to see a good start and get good position in the middle of the field,” Sano said, alluding to the Florida Derby in which Simplification pressed the pace and made the lead at the half-mile pole. “He (jockey Jose Ortiz) knows the horse and he knows he made a mistake.”

Simplification will break from post 13 that last produced a Derby winner in 2016 with Nyquist.

SMILE HAPPY, TIZ THE BOMB – Trainer Kenny McPeek had Magdalena Racing’s Tiz the Bomb and Lucky Seven Stable’s Smile Happy on the track Friday at the time reserved for Derby and Oaks horses, before the track crew began preparations for the Oaks Day 13-race program. Both colts had maintenance gallops of a mile-and-a-half. Edwardo Ruvalcaba was on Tiz the Bomb, while Danny Ramsey was aboard Smile Happy.

“Everything is good, no problems,” McPeek said of the final preparations. Among his four Friday starters is Cocktail Moments in the Oaks.

SUMMER IS TOMORROW – Michael Hilary Burke and Negar Burke’s Summer Is Tomorrow galloped a mile and a half under Heinz Runge to complete his training for Saturday’s Kentucky Derby.

“He won’t go to the track in the morning,” said trainer Bhupat Seemar, who is saddling his first Kentucky Derby starter.

Summer is Tomorrow will break from four, a spot that last produced a Derby winner in 2010 with Super Saver.

“I’d like to see him nice and relaxed and get up on the lead,” Seemar said of how he would like to see things unfold.

Mickael Barzalona has the mount in the Derby.

WHITE ABARRIO – After an early morning thundershower, C2 Racing Stable and La Milagrosa Stable’s White Abarrio went out for a routine gallop around the sealed Churchill oval Friday morning, and trainer Saffie Joseph Jr. said everything is pointing toward Saturday’s Run for the Roses.

“All’s well after his final gallop,” Joseph said after the Grade I Florida Derby and Grade III Holy Bull winner went out with exercise rider Vincente Gudiel. “It works out to about a mile and a quarter, a mile and three-eighths.”

Now Joseph has to deal with the stress of waiting for the Derby, which has a post time just before 7 p.m. on Saturday.

“One more day,” the native of Barbados said. “The nerves will hit tomorrow, on race day. Right now, I’m going to try to relax and get the two horses that are in today ready.”

Zandon schooled in the paddock Thursday for the second time this week.

“I thought with the crowd Thursday that would get him a little bit closer to the environment he’ll experience Saturday,” trainer Chad Brown said. “He handled everything great.” 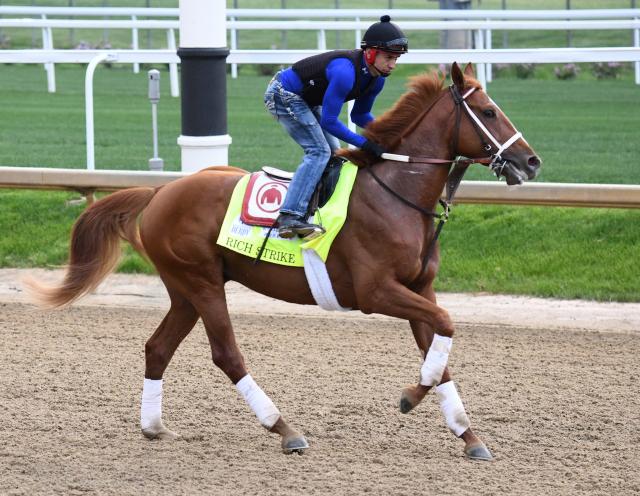