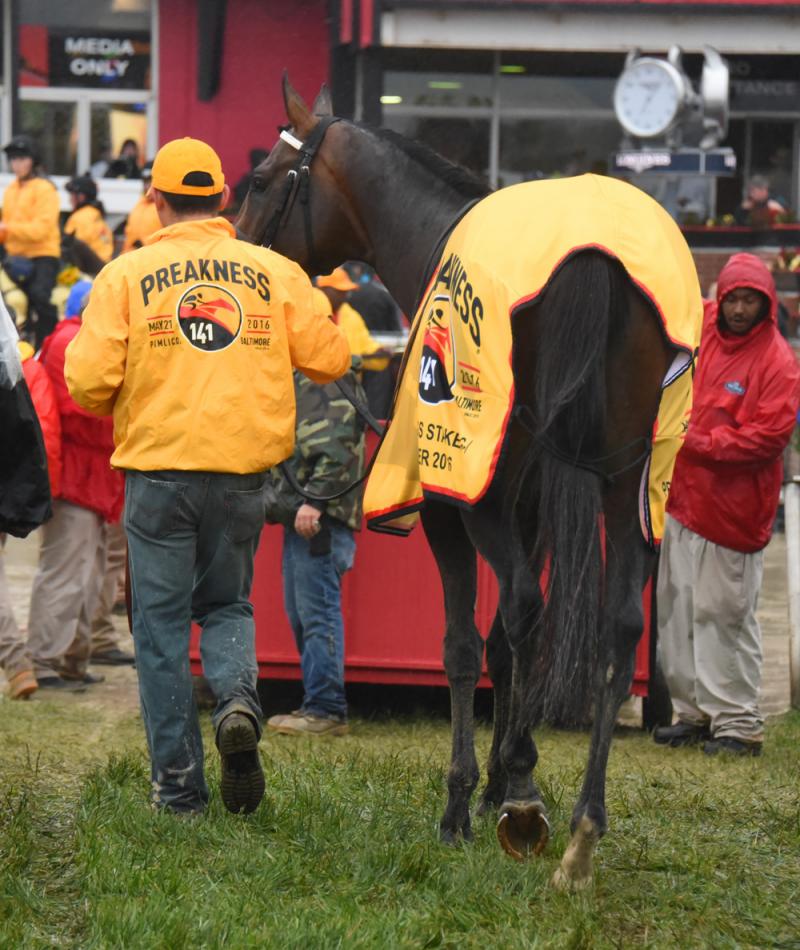 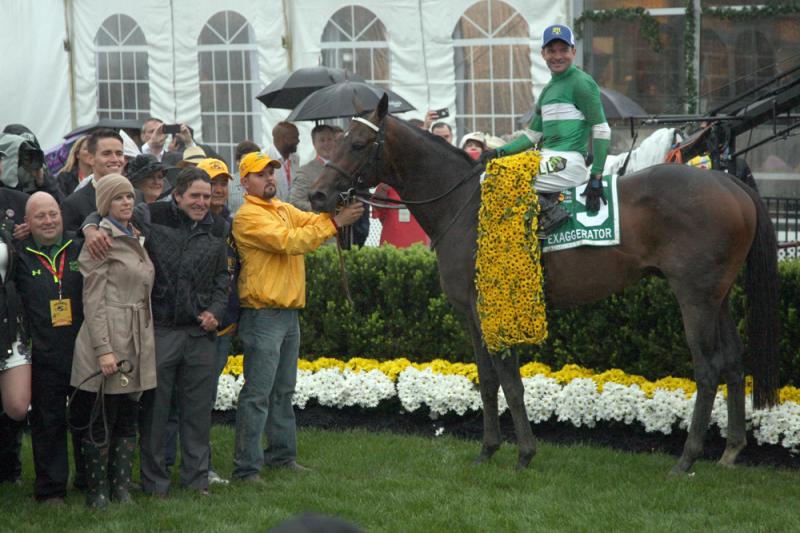 Exaggerator was forced to settle for second behind Nyquist in the 142nd running of the Kentucky Derby (G1) on May 7, but on Saturday doled out his revenge when taking the $1.5 million Preakness S. (G1) at Pimlico over a sloppy, sealed track.

The dark bay son of Curlin bided his time just off the rail under jockey Kent Desormeaux as Nyquist battled it out up front with Uncle Lino. Exaggerator found his way blocked by those two rounding the turn and angled to their outside for the final drive.

It was another 3 1/2 lengths back to Cherry Wine, who came running late to take second by a short nose over Nyquist. Stradivari was making his stakes bow in the Preakness off double-digit length wins at Gulfstream Park and Keeneland, and filled out the fourth spot another half-length behind. Lani finished fifth by a length.

Exaggerator finally turned the tables on Nyquist after running behind the previously undefeated champion in their past four meetings. The first of those came when the two were making their career debuts in the same June 5 race at Santa Anita Park.

Exaggerator finished fifth that day, then was fourth behind Nyquist in the Breeders’ Cup Juvenile (G1) the next time they met up. He continued making up ground on his rival when second in the San Vicente (G2) to kick off his sophomore season, and came flying to fill that same spot in the Kentucky Derby last out.

When not facing Nyquist, Exaggerator earned wins in the Santa Anita Derby (G1), Delta Downs Jackpot (G3) and Saratoga Special (G2) while placing in the Breeders’ Futurity (G1) and San Felipe (G2). His record now stands at 11-5-3-1 and he’s earned $2,971,120 in lifetime earnings.

Keith Desormeaux (Exaggerator, 1st): “I’m just glad I get to walk across this track and take a picture on that side. When you get to take your picture taken on the turf course, you know you’ve done well.

“It’s kind of like the Santa Anita Derby, to know that you have the race won pretty much at the eighth pole, you’ve got to enjoy it.”

(NBC Telecast) “I hope it’s not only because of the muddy track. The horse has been training phenomenally. I think there was a conscious decision on the training approach between the Derby and here. My philosophy was to take it as easy as possible because you’re not going to gain any fitness in those two weeks. I did what I could to get him happy and fresh and strong and I’ve always said he’s always had a great ability to recover and he showed it today. [The Belmont] is three weeks from today, so I’ll be there with bells on.”

Dale Romans (Cherry Wine, 2nd): “I’m proud of my horse, proud of the jockey. Exaggerator looked great all week and Keith did a good job with him. It’s a special thing, two brothers in a classic like this. It was like the O’Briens (father-son) winning the Breeders’ Cup. That’s the special thing about the sport, it proves it’s a family affair.

(Romans said Cherry Wine will go to the Belmont S. (G1) along with Kentucky Derby seventh-placer Brody’s Cause)

“The way the race set up and the track being muddy and we were in the one hole. He knew what I was talking about, he’s a big Calvin Borel (rider of 50-1 Derby winner Mine That Bird in 2009) fan. I told him to ‘give him the Mine That Bird trip, sit way back, past the mile make sure you catch the last one.’ That’s the only part of the instructions he didn’t listen to.”

(On longtime owners Frank Jones and William Pacella) “One of the greatest things that has happened in my career was when the horse was coming back, and I was congratulating them and they told me how proud they were of me and the horse. That was a special moment in my career.”

Doug O’Neill (Nyquist, 3rd): (Did slop affect your horse?) “I don’t know. Hats off to Exaggerator and Team Desormeaux. What a great run. I didn’t think we could get beat, to be honest with you. Nyquist is such an amazing horse and he still ran a great race. We’ll kind of figure this all out, watch some replays. I didn’t get a chance to talk with Mario (Gutierrez). Nyquist still ran a huge race.

(On Belmont) “We’ll huddle up with Paul and Zillah Reddam and the whole crew and see how he comes out of it. It looked like he came back and got unsaddled in good shape. Maybe we’ll try again.

“It’s a bummer, of course.  Our horse, God, he’s such an amazing horse. I can’t wait to see him in a little bit, give him a big kiss and a pat on the head because he’s still a winner in our book. They’re not machines. Being 8-for-8, we kept thinking that this horse is never going to lose, but they all lose any one time or another. We’ll be OK.

“They went pretty good early on. I just really wanted to see a good, clean trip and trouble free. I think Mario did a wonderful job with that. He didn’t bring it today and more than anything Exaggerator just ran a monstrous race. Hats off to them.

“When he swung out, I thought he might come back, Exaggerator had that momentum and Nyquist had done so much early in the race and just couldn’t keep pace. He still gutted it out and almost held on for second. I’m very proud of him.

(On weather) “It’s Mother Nature. What are you going to do. Pimlico did a great job of it with it raining all day long.

“I thought we were good all the way around. I didn’t have the greatest angle but there was some point there where it just seemed like they were going to get into a head to head battle and all of a sudden I could see Mario going around him. Oh my God, I didn’t know Exaggerator was that far ahead of him. I’m just so proud of him and I still feel like a winner.

“If we’re going to get beat, let’s get beat being aggressive and not trying to get cute and get in trouble.”

Todd Pletcher (Stradivari, 4th): “I thought he ran well. He had to move around a bit a couple of times. He had to make a couple of different moves, but I though all in all for his fourth start of his career, it was a big effort. I think he handled the footing fine, but it made for a tricky race, the way it unfolded.”

Mikio Matsunaga (Lani, 5th): “He broke from the gate slow as usual. After the wire he passed everybody. This was much better than the Derby. I really feel on a fast track he would have been closer. The race we’re looking forward to now is the Belmont because it’s longer.”

Eric Guillot (Laoban, 6th): “He climbed the whole race. He hated the track. He struggled in the mud. He was relaxed but he just struggled.”

“He was bleeding from one leg and may have gotten stepped on. That makes more sense than where he finished. He was running awfully good for a long way.”

Mark Casse (Fellowship, 8th): “I don’t think we had an excuse. There was big pace and it looked like he made a nice middle move, but he flattened out about the five-eighths pole.”

Jorge Duarte, assistant to Alan Goldberg (Awesome Speed, 9th): “He ran his race. He pressed a hot pace and they all got tired. A lot of horses had speed coming in so we expected a hot pace.”

Bob Baffert (Collected, 10th): “We just didn't have enough horse. Too far for him, I took a crack at it. It makes you appreciate…Pharoah made it look so easy you forget how hard it is. We had fun. We thought we might have a chance. He tried, but he just wasn't good enough.”

Ned Allard (Abiding Star, 11th): “You were hoping that you'd be up close, and he didn't break quite sharp enough and wasn't in the position to take advantage of what he's been able to do. Just bad racing luck. We might try to find a little easier spot.’”

Kent Desormeaux (Exaggerator, 1st): (NBC Telecast) “I can’t even fathom. It’s going to take a while. I’m in shock right now. I think that Nyquist had company all the way around the course. They stayed really wide. For the [trouble] I’ve had in his previous starts, I had a dream trip today. I was on the fence and they all stayed wide. These turns, you want to paint the fence. We did, they didn’t and, not for nothing, but knowledge is power.”

Corey Lanerie (Cherry Wine, 2nd): “We got a smooth trip. We broke in and had absolutely no speed. They rode around and let them come to us and he started to show his kick in the middle of the turn at the three-eighths pole. We did not encounter any trouble. We had pretty clear sailing. This one feels good.”

Mario Gutierrez (Nyquist, 3rd): “I could feel Exaggerator coming. There was nothing we could do. We swung out late but they were tough. We tried but just didn’t get there.”

John Velazquez (Stradivari, 4th): “I had a good trip. The only thing he didn’t do was relax. He went out from here to the three-quarter pole and tried to do more than I wanted him to. I got right up behind Nyquist and thought we had him, but we just didn’t have enough horse left to compete.”

Yutaka Take (Lani, 5th): “He had a good trip. The stretch was a little too short for him. We had no problems at all and he made up a lot of ground.”

Florent Geroux (Laoban, 6th): “I had a good journey. We stayed off the speed and tried to make our move at the half. Then he just stayed there. But he was fine. He should be real good next time.”

Fernando Perez (Uncle Lino, 7th): “We had some fast fractions early and I had my horse in a good position but the horses behind me were faster than my horse and I didn’t want to cause any problems so I waited to slow down. We were going a little too fast early and I know that we would have finished better if there would have been a slower pace.”

Jose Lezcano (Fellowship, 8th): “I had a really good trip. I tried to keep going but we just couldn’t stay even.”

Jevian Toledo (Awesome Speed, 9th): “I tried to keep him in the clear all the way. He gave me everything he had but he just didn’t go. The track was pretty bad. He couldn’t catch the winner and that’s the story.”

Javier Castellano (Collected, 10th): “We had a good trip. My horse was right there early with the speed. We didn’t get the best of trips the rest of the way.”

J. D. Acosta (Abiding Star, 11th): “My horse broke good and we were going fine but he does not like dirt kicked into his face and this is really the first time he got hit with mud. He ran out fine for me and I was very glad that the trainer allowed me to keep the mount.” 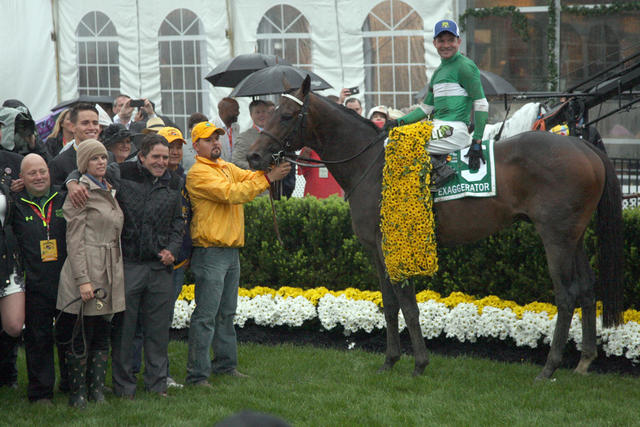