Experience Justify's pedigree with this video tour of his greatest ancestors 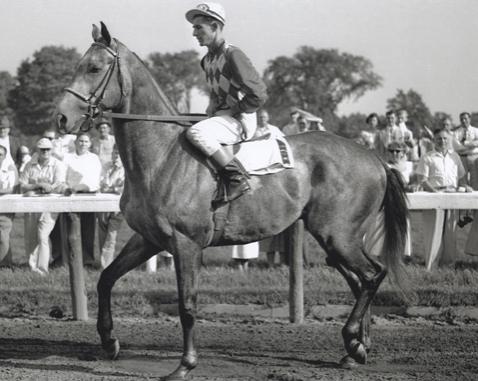 As unbeaten Kentucky Derby (G1) and Preakness (G1) winner Justify aims for an historic Triple Crown sweep in the June 9 Belmont S. (G1), thoughts turn to his forebears who made history themselves. If the typical pedigree write-up makes your eyes glaze over, then this one’s for you – a video tour of some of the champions appearing in Justify’s ancestry.

Sire Scat Daddy was a high-class performer who captured the 2006 Champagne (G1) and 2007 Florida Derby (G1), but his sire in turn, Johannesburg, was a superstar on two continents. During a perfect 2001 campaign for top Irish trainer Aidan O’Brien, Johannesburg scored Group 1s in England, Ireland, and France to reign as Europe’s champion two-year-old colt. But American fans may remember him better for shipping to Belmont Park to plunder the Breeders’ Cup Juvenile (G1) in his dirt debut, and in the process picking up an Eclipse Award as the U.S. champion in that division:

Johannesburg was avenging the narrow losses suffered by his sire, Hennessy, and paternal grandsire, Storm Cat, in their respective editions of the Breeders’ Cup Juvenile. Hennessy was just outpointed by Unbridled’s Song in 1995, also at Belmont, while Storm Cat was nailed by Tasso on the wire in the 1985 running at Aqueduct.

Storm Cat was by Irish-based champion Storm Bird, who was trained by the legendary Vincent O’Brien. No relation of Aidan, the elder O’Brien was the first master of the Ballydoyle training complex long before the younger phenom inherited the mantle. Storm Bird clinched top two-year-old colt honors in both England and Ireland after remaining undefeated through the 1980 Dewhurst (G1) at Newmarket:

Storm Bird was bred in Ontario by turf titan E.P. Taylor, who also bred his breed-shaping sire, Northern Dancer. A champion at three in both the United States and his native Canada, Northern Dancer won the 1964 Kentucky Derby in then-track record time (2:00) at Churchill Downs, added the Preakness, but could not garner the Triple Crown when a distant third behind Quadrangle in the Belmont. The diminutive bay rebounded with a 7 1/2-length romp in Canada’s signature classic, the Queen’s Plate, in what turned out to be his final start. Few could have imagined that Northern Dancer would become a prepotent stallion who would stamp his influence all over the world.

Northern Dancer was by another Taylor-bred, Nearctic, the Canadian Horse of the Year in 1958. Nearctic’s pedigree was blueblood European. Taylor had purchased his dam, Lady Angela, at the British auction house Tattersalls in 1952. Before bringing her home to his Windfields Farm in Canada, though, he bred her back to one of the all-time greats in racing and breeding history, Nearco. That resulting foal was Nearctic, just one of the vectors of Nearco’s genetic heritage on the modern Thoroughbred.

The YouTube video by Giuseppe Moscuzza is in Italian, but you don’t need to know the language to enjoy scenes of Nearco’s romp in the 1938 Italian Derby and his conquest of a star-studded field in the Grand Prix de Paris. Retired with a perfect 14-0 record to Beech House Stud in Newmarket, Nearco had his own bomb shelter to protect him from the notorious German air raids during World War II:

Nearco, a testament to his owner/co-breeder/trainer Federico Tesio, became the seminal building block in pedigrees. Aside from the Nearctic-Northern Dancer line, Nearco is also responsible for *Nasrullah, sire of Nashua and ancestor of a whole tribe through another son, Bold Ruler. (Yet another son of Nearco, *Royal Charger, bequeathed the sire line further promoted by the exploits of Sunday Silence.)

Justify has multiple crosses of both Nearctic and Nasrullah. For starters, Justify’s sire, Scat Daddy, and dam, Stage Magic, are both inbred to Northern Dancer and to Mr. Prospector.

Stage Magic hails from a different branch of Northern Dancer’s sire line. Her sire, Hall of Famer Ghostzapper, had brilliant speed that he carried over the American classic distance in the 1 1/4-mile Breeders’ Cup Classic (G1) in 2004, setting the stakes (and Lone Star Park track record) in 1:59.02.

Justify’s ancestor Mr. Prospector traced to Nearco through his dam’s side, being out of a mare by Hall of Famer Nashua.

Upset by Swaps (another distant ancestor) in the 1955 Kentucky Derby, Nashua rolled in his absence in the Preakness and Belmont, He finally got the chance to exact revenge upon Swaps in their famous match race at Washington Park later that summer.

Justify has several crosses of Hall of Famer Bold Ruler, who compiled a Horse of the Year campaign in 1957 despite being part of a ferociously deep crop of three-year-olds. His rivals for the crown were two other future Hall of Famers, *Gallant Man and Round Table. Justify can count all three as ancestors buried deep within his pedigree.

Watch Bold Ruler, the 1957 Preakness winner, clinch the year-end championship by wiring the Trenton Handicap over late-running Gallant Man and Round Table:

Justify receives his Bold Ruler inheritance through three different exponents. Inbred to Bold Ruler’s son What a Pleasure, he also traces to two Triple Crown winners of the 1970s who descended from his sire line – the immortal Secretariat and Seattle Slew. Secretariat was Bold Ruler’s greatest son, while Seattle Slew was a great-grandson from a branch that he raised to prominence.

Secretariat ended a 25-year Triple Crown drought when trouncing the 1973 Belmont in 2:24, following on his record-setting victories in the Kentucky Derby (1:59 2/5) and Preakness (1:53, only recognized years later thanks to a timing malfunction at Pimlico on the day). To call that a record time for 1 1/2 miles on dirt is an understatement; it’s positively other-worldly.

Just four years later, Seattle Slew rationed out his speed to complete the sweep in the Belmont. “Slew” is still the only horse to remain unbeaten through the Triple Crown, a feat that Justify hopes to emulate.

Justify’s Seattle Slew connection comes courtesy of Stage Magic’s dam, Magical Illusion. She was by Pulpit, a son of Hall of Famer A.P. Indy, who was himself by Seattle Slew and out of the prolific Secretariat mare Weekend Surprise. Unfortunately scratched from the Derby with a foot bruise, A.P. Indy later proved himself the top three-year-old of 1992. He emulated dad and granddad by scoring in the Belmont, and went on to take Horse of the Year honors in a race that didn’t exist in their day, the Breeders’ Cup Classic.

A.P. Indy’s strain of Secretariat isn’t the only one Justify has, for his male-line ancestor, Storm Cat, was likewise out of a Secretariat mare, the brilliant Terlingua.

Secretariat isn’t the only Triple Crown winner to make two readily apparent appearances in Justify’s pedigree. The other, who shows up even closer, is Nijinsky II, hero of the archetypal Triple Crown in England in 1970. Bred by the aforementioned E.P. Taylor and trained by Vincent O’Brien, the son of Northern Dancer became the first horse in 35 years to capture the one-mile 2000 Guineas (G1) at Newmarket, the 1 1/2-mile Derby (G1) at Epsom, and the extended 1 3/4-mile St Leger (G1) at Doncaster. No one’s done it since, and only one has even tried.

Nijinsky II factors on the bottom half of both Scat Daddy and Stage Magic, giving Justify inbreeding to him in the fourth and fifth generation (4x5).

A more cosmopolitan, and less often duplicated, champion from much further afield also occurs a couple of times – South African legend *Hawaii. Imported to the United States after two championship campaigns in his homeland, Hawaii was voted champion grass horse of 1969 after major scores in the United Nations H., Bernard Baruch H., and Man o’ War. His legacy survives through a few notable daughters, including the dam of Hennessy and Ghostzapper’s great-granddam in his direct maternal line.

It would be remiss not to mention another 1960s star in the fifth generation of Justify’s ancestry, Hall of Famer Damascus, who pops up in the dam’s side of Johannesburg. Like Nashua, Damascus was overturned as the Kentucky Derby favorite in 1967 (finishing third) but regrouped to dominate the final two jewels of the Triple Crown. He’s perhaps better remembered for winning the all-star Woodward Stakes, often called the “race of the century,” over fellow Hall of Famers Buckpasser (who appears in A.P. Indy’s pedigree) and Dr. Fager.

But there’s one more influence to celebrate, in fact the vital link uniting the two most significant pieces of Justify’s bloodlines – Hall of Famer Native Dancer. His genes saturate the Thoroughbred through his grandsons Northern Dancer (out of Native Dancer’s daughter Natalma) and Mr. Prospector (by Native Dancer’s son Raise a Native, unbeaten co-champion two-year-old colt of 1963).

A champion at two, three, and four, boasting a sterling record of 21 wins from 22 starts, the “Grey Ghost” suffered his only reverse in the 1953 Kentucky Derby. A troubled trip proved costly as he came up a head shy of Dark Star (another remote ancestor). That was also the scant margin separating him from a Triple Crown, for Native Dancer prevailed by a neck in both the Preakness and Belmont.

Native Dancer’s grandsons Mr. Prospector and Northern Dancer both resulted by crossing his line with the mighty Nearco.

An entry in Tesio’s stud book* on Nearco sums up his dominance on the track, and gives a hint to the reason for his genetic power:

“Not a true stayer, though he won up to 3,000 meters, i.e., 1 7/8 miles (Gran Premio di Milano and Grand Prix de Paris). He won these longer races by his superb class and brilliant speed.”

Might we say the same of Justify if he carries his speed over the Belmont’s 1 1/2 miles? 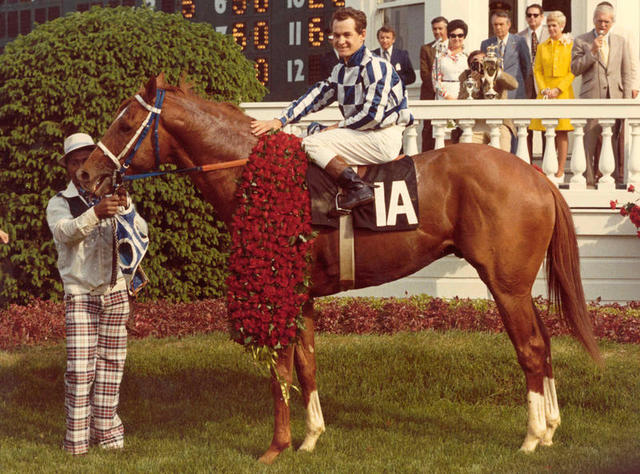