Ten horses face the starter in this year’s Juvenile, with the market dominated by leading Californian juvenile Cave Rock. He couldn’t have been more impressive in his starts to date, but I’ve been equally impressed by the East Coast star, Forte. Together, they form the Expert Pick of the Week.

Cave Rock hasn’t looked like being beaten as yet. An easy maiden winner on debut, he quickly graduated to the top level in both the Del Mar Futurity (G1) and the American Pharoah (G1). In all his starts he’s gone straight to the front and run his opponents off their feet. From gate four, he will almost certainly be taken to the front by Juan Hernandez and be very difficult to run down.

However, if there’s a horse that can run him down, it’s Forte. An easy maiden winner at Belmont Park, he didn’t show his best in the Sanford (G3) at Saratoga on his second start. But in two starts since he’s been impressive, reeling in Gulfport in the Hopeful (G1) back at Saratoga before doing the same to the talented Loggins in the Breeders’ Futurity (G1) at Keeneland.

Newgate, a stable companion of Cave Rock, provides a useful measuring stick; he was 10 1/2 lengths behind Cave Rock in the Del Mar Futurity, and then 7 1/4 lengths behind Forte in the Breeders’ Futurity. That 3 1/4 length difference suggests it’s definitely advantage Cave Rock, but not to the level to suggest to me that Forte has no chance, especially considering how quickly Forte pulled away from Newgate in the Keeneland stretch.

The best option may be to take the two horses in exactas, with the one featuring Cave Rock on top played for a larger stake than the one with Forte to finish first.

Two exactas: one with #4 Forte on top of #3 Cave Rock, and another with Cave Rock on top of Forte for three times the value of the other, in the Breeders’ Cup Juvenile is the Best Bet of the Week. 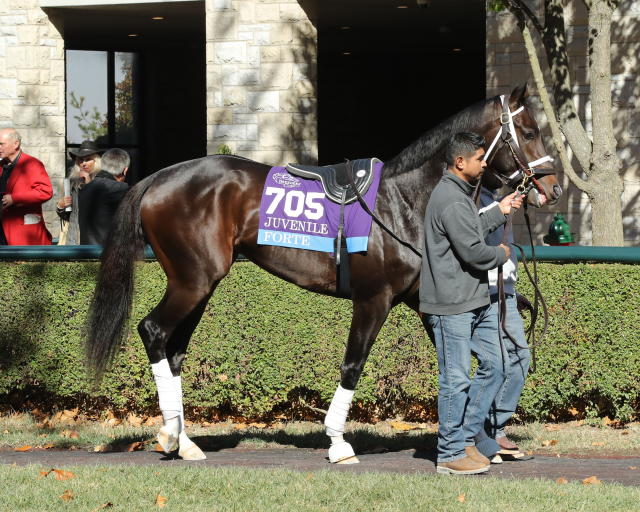