Expert Pick of the Week: American Pharoah Stakes on Oct. 1

A fine field of seven two-year-old prospects will go postward in Friday’s $300,000 American Pharoah S. (G1) at Santa Anita. The first-place finisher of the “Win and You’re In” event will be rewarded with a berth in the Breeders’ Cup Juvenile (G1) at Del Mar on Nov.5. In addition, the American Pharoah also acts as a 2022 Road to the Kentucky Derby challenge series contest, with the top four earning points on a 10-4-2-1 basis.

Conditioner Bob Baffert will saddle a trio of expensive juveniles in the cast led by dynamic debut winner Corniche. Bred in the Bluegrass State, the $1.5 million juvenile purchase ran to his 1-2 odds at first asking in posting a dominant win going 5 1/2 furlongs on the Del Mar main surface. The February foal broke fast and was soon clear in his initial offering en route to a convincing 4 1/4-length romp under Mike Smith.

The son of Quality Road is well bred and out of a Grade 2 heroine who carried her speed a route of ground in her career. Corniche earned a robust 99 Brisnet Speed figure in his tally, and while he gets a tricky draw on the rail, the colt seems poised to break swiftly and secure a good position from the start. The bay shows a pair of solid morning moves on the surface as of late and will be tough to upend with anything resembling his debut showing with Smith back in the stirrups.

Baffert’s Rockefeller, a $750,000 son of Medaglia d’Oro, looms as the main danger to his stablemate. The bay overcame both a rail draw and poor break on debut to win like a good thing, and his future appears to be very bright. Rockefeller is cut out to handle additional distance and could shine in his first two-turn endeavor. The March foal didn’t come home especially fast in his first try, but he has trained well in the interim, and the youngster will benefit greatly from having a run under his belt in advance of Friday. Flavien Prat inherits the mount.

An exacta with Corniche on top of Rockefeller in the American Pharoah Stakes is the Best Bet of the Week. 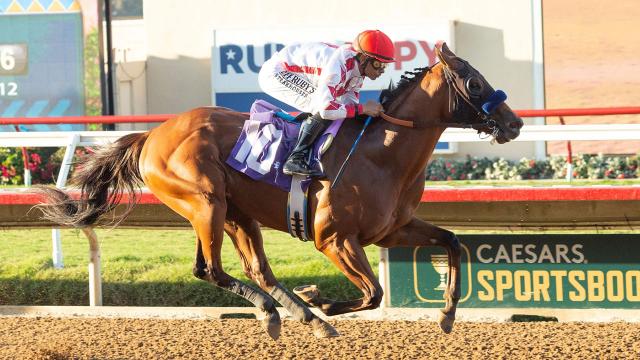