A compact group of six Triple Crown hopefuls will travel nine furlongs on the dirt at Oaklawn Park in Saturday’s lucrative $1 million Arkansas Derby (G1). The 2021 Road to the Kentucky Derby contest features five horses who were last seen competing in the Rebel S. (G2). On Saturday, the field will be chasing qualifying points toward the Run For the Roses with 170 on the line (100-40-20-10).

The Bob Baffert-trained Concert Tour is unblemished from a trio of lifetime races to date, including a sterling performance in the aforementioned Rebel on the course. By Street Sense, the bay colt has posted two strong morning drills in the interim and seems poised for another top performance. He is the Expert Pick of the Week.

Concert Tour debuted in January at Santa Anita and led throughout en route to a 3 1/2-length score as the even-money favorite. The bay three-year-old showed a new dimension in his second try when rating off the pace and closing for the win in the seven-furlong San Vicente S. (G2). In the Rebel, the Gary and Mary West homebred broke best and never looked back in posting a dominant 4 1/4-length triumph while being geared down late.

The formidable sophomore gives every impression of being one of the top horses of his generation, and I think that he will cement his status as the one to beat at Churchill Downs on May 1 following the Arkansas Derby. He has improved with added ground and could continue to do so with more seasoning. Regular pilot Joel Rosario will force the early pace before taking over in the stretch atop the colt.

While the favorite will not offer a lot of value in the win pool, he can top a nice exacta with Steve Asmussen’s Super Stock. The Dialed In colt had a productive two-year-old season that included a clear third-place finish in the Breeders’ Futurity (G1), and he left a solid impression when fourth in the Rebel while making his first start of 2021 as well.

Super Stock has decent tactical speed, a consistent closing punch, as well as a fine draw on the rail to save ground throughout. The Kentucky-bred will track behind a swift early pace prior to rallying and earning his second Grade 1 placing on Saturday. Ricardo Santana will be in the silks.

An exacta with #5 Concert Tour on top of #1 Super Stock is the Best Bet of the Week. 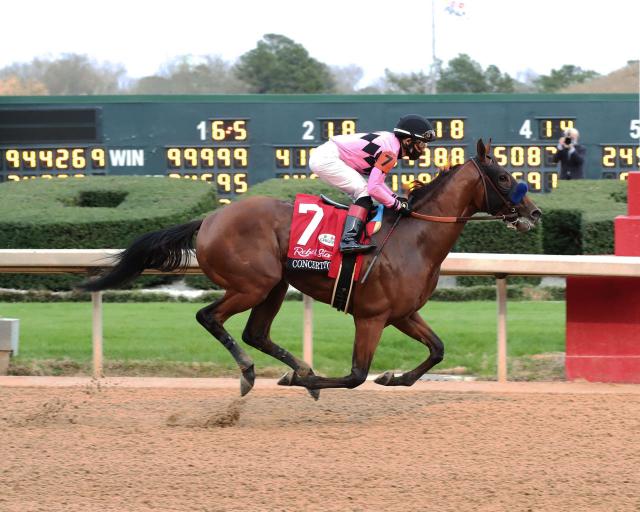