A superb field of nine sophomores will travel 1 1/4 miles on the Belmont inner turf in Saturday’s lucrative $1 million Belmont Derby Invitational S. (G1). The cast features strong domestic runners, as well as, a pair of stout international contenders, in what will be a thrilling event.

The Jonathan Thomas-trained Hard Love has been first or second in each of his four lifetime tries, which includes an unblemished 2-for-2 mark on the Belmont turf. A winner of the Woodhaven S. in his three-year-old debut, the ridgling was a game allowance victor when defeating his elders most recently. He looks to be leading up to a peak showing in his third race off the bench, and Hard Love is the Expert Pick of the Week.

A convincing first-out winner on the oval as a juvenile, Hard Love followed that performance up with a runner-up finish in the Central Banker S. at Aqueduct to conclude his brief two-year-old campaign. The bay has won both of his starts in 2021 and shows consistent morning drills in preparation of his graded stakes bow.

The son of Kitten’s Joy has good tactical speed and is bred to handle the distance with relative ease. His running style hints that the move to 10 panels will be ideal due to his being something of a grinder at this stage of his development. Manny Franco, who has piloted the sophomore in both of his efforts at Belmont Park, will be in the silks once again. I envision Hard Love to always be in the running and to wear down his foes inside the final furlong on Saturday.

A pair of additional contenders in the field will battle for second-place honors. Du Jour was ultra-impressive in rolling home in the deep American Turf S. (G2) at Churchill Downs in his latest venture. By Temple City, the colt has recorded a trio of daylight tallies on the green in succession and will be firing late in his initial try since joining the barn of Bill Mott. Flavien Prat will be in the stirrups.

European invader Bolshoi Ballet brings strong credentials and pilot Ryan Moore to the field for his U.S. debut. The two-time Group 3 hero picked up his two biggest wins to date at the 1 1/4-mile trip, and the son of Galileo might be the one to beat for Aidan O’Brien. The bay will stalk the pace while saving ground from the outset.

An exacta with Hard Love on top of Du Jour and Bolshoi Ballet in the Belmont Derby Invitational Stakes is the Best Bet of the Week. 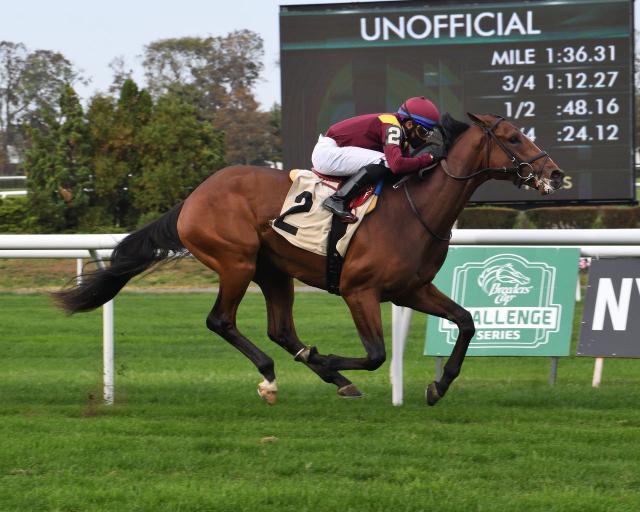