The $400,000 Risen Star S. (G2) will headline a big day of action on Fair Grounds on Saturday. A total of six stakes events are on the slate at the New Orleans venue, led by the 2021 Road to the Kentucky Derby challenge series contest. The top four finishers in the important Derby prep will be rewarded with qualifying points on a 50-20-10-5 structure.

Juddmonte Farms’ homebred Mandaloun won his first two races in sharp fashion prior to coming home a solid third in the Lecomte S. (G3) in his stakes and local debut last time out. The son of Into Mischief makes his second start off the short layoff and seems poised to pick up his first lifetime stakes trophy for conditioner Brad Cox. He is the Expert Pick of the Week.

Mandaloun was unveiled at Keeneland in late October and rewarded his many backers with a rallying win as a short-priced favorite. Bred in the Bluegrass State, the bay remained unbeaten following his second appearance when once again doing his best work in the stretch en route to victory, this time at the expense of allowance foes beneath the Twin Spires.

The impressive colt was well positioned in the Lecomte throughout, but he hung a bit inside the final furlong when finishing a length back behind a pair of talented runners. He will race with blinkers on for the initial time on Saturday, and if his pair of rapid morning drills as of late is any indication, Mandaloun will improve on the stretch out to 1 1/8 miles.

Mandaloun has good positional speed, and drawing wide will be a benefit for the tactical colt, as well. I expect pilot Florent Geroux to have the sophomore stalking the pace, while always in touch with the leaders early on, and for Mandaloun to advance into prime position at the top of the lane. The lightly raced three-year-old has improved his Brisnet Late Pace figures in every career performance as the distances have increased, so the move to nine furlongs will not be a problem for the well-bred youngster.

#11 Mandaloun (9-2) winning the Risen Star Stakes is the Best Bet of the Week. 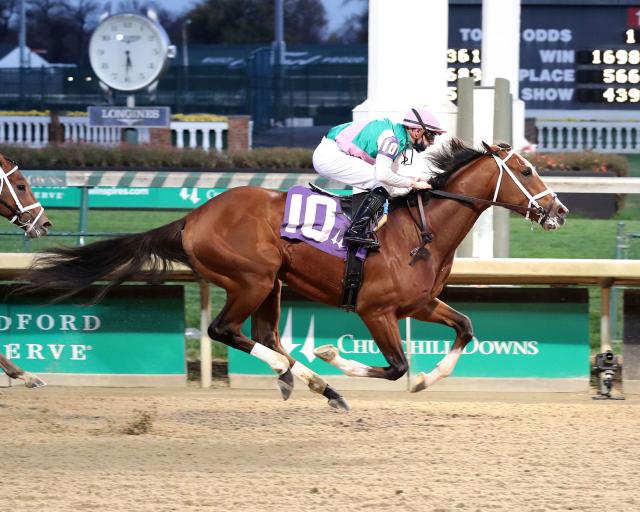