A full field of 12 sophomore fillies will contest Saturday’s $200,000 San Clemente S. (G2).at Del Mar. The mile turf test is led by the exciting Going Global, who shows an unblemished mark from four races since arriving in the U.S. Trained by Phil d’Amato, the three-time stakes heroine will make her debut on the Del Mar turf, and I feel that her first local appearance will be a winning one. She is the Expert Pick of the Week.

Going Global graduated in her fourth lifetime outing when going clear on the all-weather surface at Dundalk to cap her juvenile campaign. Commencing her three-year-old season in the Sweet Life S. (G3) at Santa Anita, she rallied to a fine victory in the six-furlong affair while making her U.S. debut. The Mehmas filly moved to a mile for the China Doll S. and aced her route debut with a measured victory, and she also proved that nine furlongs was not an issue when staying on to capture the Providencia S. (G3).

The recent Honeymoon S. (G3) was her most explosive performance to date, however, as she drove clear to a superb 4 3/4-length triumph beneath regular rider Flavien Prat. Going Global cuts back to what I think is her ideal distance in the San Clemente, and it’s a positive that she got in a turf move locally in advance of Saturday, as well. The fantastic bay will track the pace before taking command in midstretch with Prat in the stirrups once again.

Equilove, also from the d’Amato shedrow, has intrigue to complete the exacta in her initial try at a route of ground in the states. The bay daughter of Equiano is 2-for-3 in turf sprints since arriving stateside and gives the impression of a filly who will thrive with additional distance. The bay has won from on and off the pace to show her versatility, and she is bred to stay the trip for a conditioner who is due for a hot stretch at the Del Mar meeting.

Nimbostratus makes her first outing since being claimed for a hefty $150,000 last time out. The Leonard Powell trainee is stakes-placed on the course and exits a game tally at Santa Anita in her most recent try. By Wootton Bassett, the French-bred bay will be stalking the pace to the turn for home with Abel Cedillo taking the reins once again.

An exacta with Going Global on top of Equilove and Nimbostratus is the Best Bet of the Week. 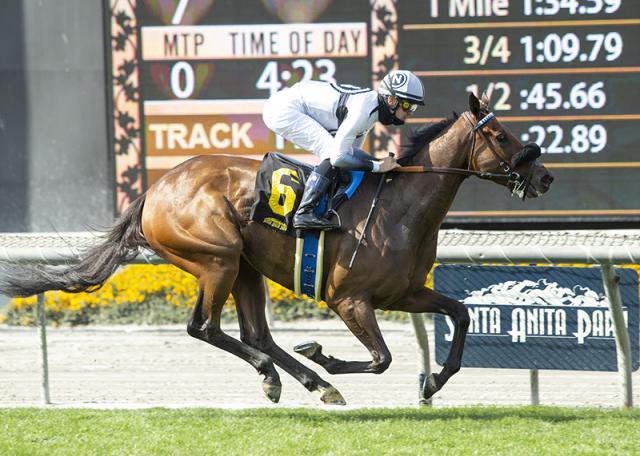