Expert Pick of the Week: The Jerome Stakes

There are no sure bets in horse racing, but it seems reasonably safe to conclude #3 Independence Hall is going to win the $150,000 Jerome Stakes on New Year’s Day at Aqueduct.

By virtually any metric you choose to consider, Independence Hall is a standout in this one-mile Road to the Kentucky Derby prep race. Sold for $100,000 as a yearling, Independence Hall has already earned back his purchase price thanks to a dominant maiden victory at Parx Racing and a jaw-dropping romp in the Nashua Stakes (G3).

In the Nashua, held over the same track and distance as the Jerome, Independence Hall tracked fast fractions before seizing command on the turn. In front by two lengths at the quarter pole, he widened his advantage despite drifting in and out down the stretch, sprinting the final quarter in an excellent :24.42 seconds to win by 12 ¼ lengths in 1:34.66. Both his margin of victory and his final time were records for the Nashua Stakes.

With Eclipse Award-winning jockey Jose Ortiz retaining the mount, Independence Hall figures to once again track the pace before pouncing on the turn. Anything close to a repeat of his Nashua performance will land him in the Jerome winner’s circle, and if this son of Constitution improves at all—perhaps with a more focused run down the straight—we could be looking at another double-digit margin of victory.

#1 Prince of Pharoahs, a gate-to-wire maiden winner going a mile at Belmont Park, is a logical candidate to finish in the exotics. A son of Triple Crown winner American Pharoah, Prince of Pharoahs fired off a bullet workout on December 18 for hot trainer Linda Rice, who has compiled a 23% win rate at Aqueduct this winter. With his tactical speed, expect Prince of Pharoahs to seize the early initiative while breaking from the rail.

Down the stretch, the main threat from off the pace should be #7 Bourbon Bay, who has posted solid Brisnet speed ratings and Late Pace ratings in his first two starts. On December 5, this stoutly-bred son of Breeders’ Cup Classic (G1) winner Bayern rallied to win a six-furlong maiden race by 2 ¼ lengths, posting a 97 Late Pace rating. The added distance shouldn’t be any issue, and hot jockey Jose Lezcano will be in the saddle.

We suggest playing Independence Hall on top of Prince of Pharoahs and Bourbon Bay in the trifecta. For third place, consider adding #2 Inside Risk, who drops in class and returns to dirt while making his first start as a gelding. 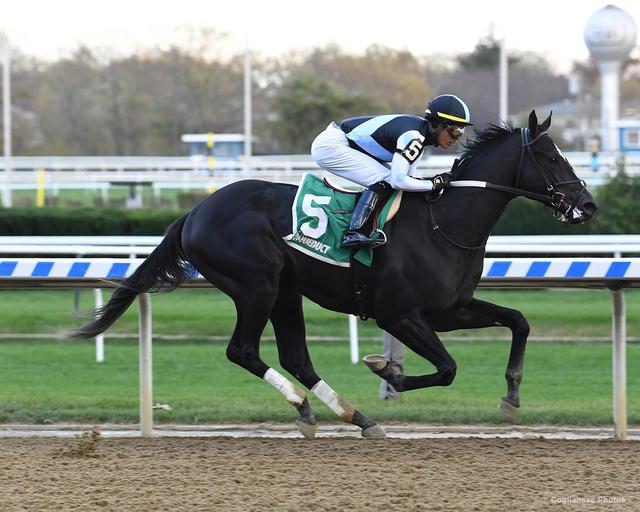