Expert Pick of the Week: The Remsen Stakes

Who should you bet in the Remsen Stakes?

Nine two-year-old colts will travel 1 ⅛ miles on the Aqueduct main surface in Saturday’s $250,000 Remsen Stakes (G2). An evenly-matched cast will contest the “2020 Road to the Kentucky Derby” race, which will award the top-four finishers points on a 10-4-2-1 structure.

Trainer Todd Pletcher has two contenders in the field that are difficult to separate. But I will give a slight edge to Chase Tracker as the Expert Pick of the Week.

Chase Tracker debuted at Parx on Pennsylvania Derby Day and powered home a going-away winner at the difficult seven-furlong distance on debut. The son of Verrazano earned a solid 90 BRIS Speed figure for his work, which gave him the green light to face graded opposition in his subsequent outing.

The $67,000 yearling purchase went postward at 9-2 odds in the Nashua Stakes (G3) at Aqueduct and finished a clear third behind the exquisite Independence Hall while wide throughout. He has since added blinkers and shows a pair of solid half-mile moves in preparation of the Remsen Stakes.

Javier Castellano picks up the mount atop Chase Tracker who will benefit from securing the rail post in his first run around two turns. The April foal exits a pair of outings that witnessed swift early splits, and in this field with little confirmed early foot, the dark bay will be closer to the tempo than he has been to this stage of his development.

Alpha Sixty Six, the other Pletcher pupil, warrants respect as well. The $400,000 son of Liam’s Map was a game debut winner over recent maiden winner Hemlock at Belmont Park, and he followed that with an even fifth-place showing in the Champagne Stakes (G1).

The Kentucky-bred bay comes in fresh for this assignment, and like his stable mate, he will also receive an equipment change for his two-turn bow. Alpha Sixty Six will remove the blinkers on Saturday for a conditioner who has been successful when using this tactic in the past. John Velazquez will pilot the prospect and likely have him tracking from off the pace in midpack early on.

An all-Pletcher exacta with Chase Tracker on top of Alpha Sixty Six is the Free Pick of the Week. 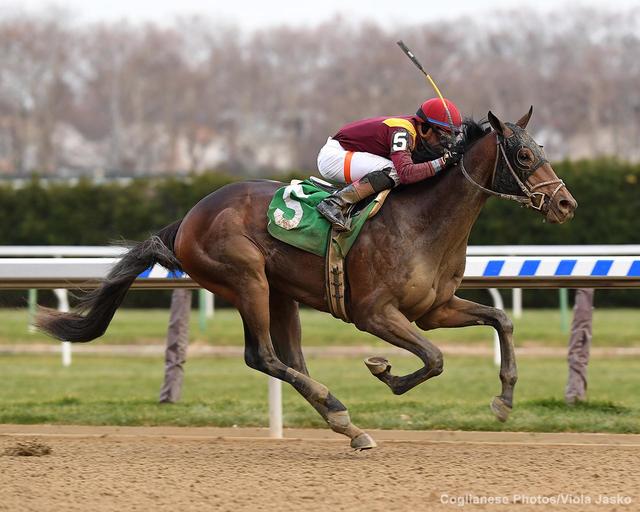