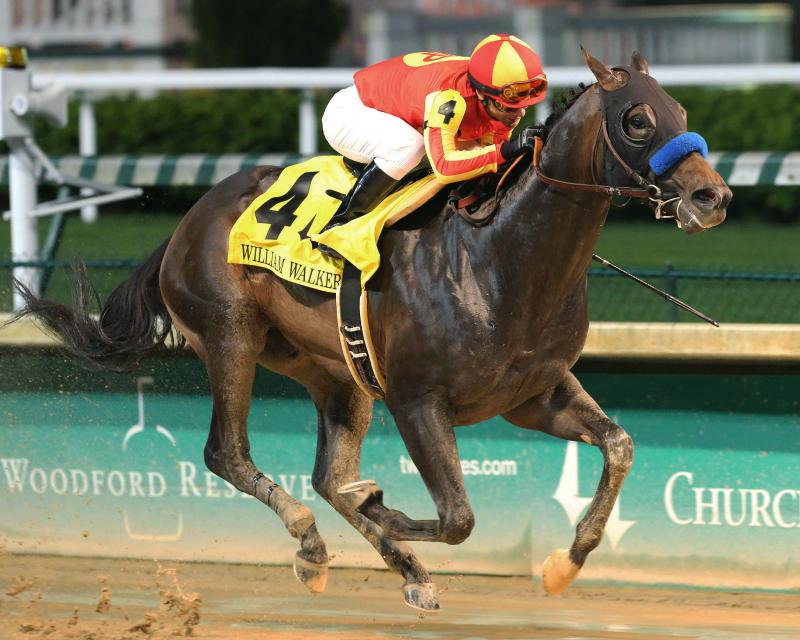 Favored Toews On Ice provided trainer Bob Baffert with his 40th stakes victory at Churchill Downs when he rolled to a two-length victory in the $100,000 William Walker Stakes, the racing highlight of the "Opening Night" of the Spring Meet and Kentucky Derby Week.  Jockey David Lopez rode the winner in his first mount at Churchill Downs (Coady Photography | Churchill Downs)

Mike Pegram, Karl Watson and Paul Weitman’s Toews On Ice took command at the head of the stretch and cruised home by two lengths over Entertainer to win the second running of the $100,000 William Walker for 3-year-olds on a rainy Saturday night at Churchill Downs to open the 2016 Spring Meet.\

Twizz led the field through an opening quarter-mile in :21.62 with Toews On Ice just off the pace racing in the three path. Lopez sent Toews On Ice after the leader on the far turn, grabbed the lead at the top of the lane and never was threatened in posting his fourth stakes victory,

Toews On Ice is a Kentucky-bred son of Archarcharch out of the D’wildcat mare Wild Forest Cat.

Twizz finished another two lengths back in the fourth and was followed by Patton Proud.

DAVID LOPEZ (Jockey of Toews On Ice, winner) – “He broke a step slow. The 2 (Sheikh of Sheikhs) didn’t show the speed I expected him to, but I decided to stay close. It was all I had to do, the rest was all him. They trained him perfectly up to this race. (On winning his first race as a journeyman) This is a dream come true. As a kid growing up in Jersey, I would watch Bob (Baffert) come in and win the Haskell. Now, I’m winning races like this for him.”

JIMMY BARNES (Assistant to Bob Baffert trainer of Toews On Ice, winner) – “He ran good. We brought David (Lopez) here to work some horses for us. We gave him a mount today. He did good with it. I don’t know what happens next with the horse. Bob (Baffert) makes that call. I just get them ready and then hopefully get a picture taken.”