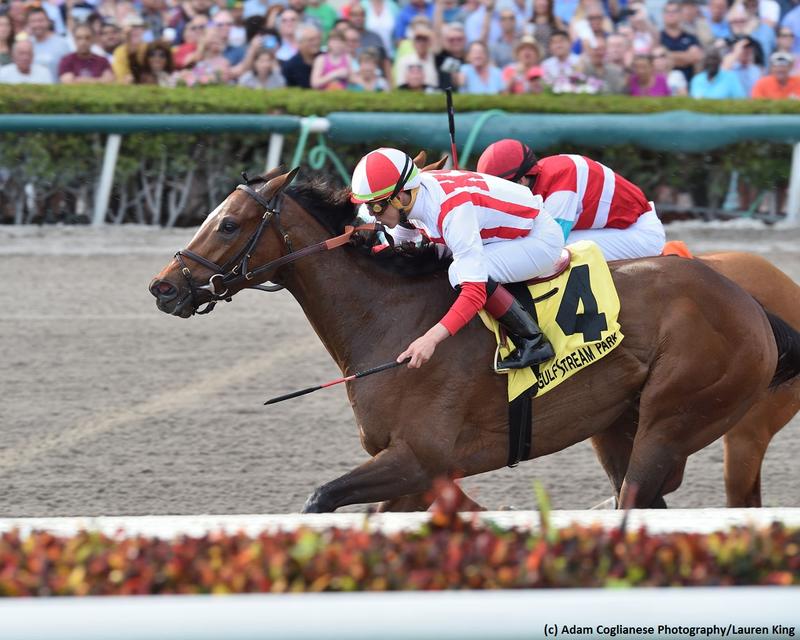 Klaravich Stables Inc.’s Feedback was sent off the 1-2 favorite in Saturday’s $150,000 Forward Gal Stakes (G3) at Gulfstream Park and didn’t disappoint with a half-length victory.

The Chad Brown pupil broke fast, sticking her neck in front once the gates opened, but was passed by Fashion Faux Paus to her inside. That filly set swift early fractions of :22.20 and :45.34 but couldn’t hold off Feedback, who easily galloped past on the backstretch under jockey Irad Ortiz Jr.

Feedback held the advantage entering the lane but found a challenge from Bye Bye J to her outside. Ortiz got busy and Feedback maintained her lead to the wire, finishing seven furlongs on the fast main track in 1:23.51.

Champagne Anyone, sent off at 12-1, came flying late up the rail to just miss second by a neck behind Bye Bye J. Jeltrin, the 124-1 longshot, filled out the top four 1 1/2 lengths farther back in fourth.

Feedback, who romped by eight lengths in her maiden debut at Saratoga last August 12, earned 10 points on the Road to the Kentucky Oaks while facing winners for the first time in this spot. Bye Bye J took home four points while Champange Anyone garnered two and Jeltrin one toward a berth in the Kentucky Oaks (G1) starting gate on May 3 at Churchill Downs .

Bred in Kentucky by Wolverton Mountain Farm LLC and Cameron Wheeler, Feedback is out of the Grade 3-placed Tale of the Cat mare Honest Answer, making her a half-sister to Grade 3-placed Sweet Swingin and Grade 2 runner-up Law Abidin Citizen.

Honest Answer is herself a half-sister to Canadian champion Truth of It All and multiple Grade 1 queen I Ain’t Bluffing, who foaled Grade 2 winner Acting Happy.

"I'm happy and relieved, because this horse I really didn't have quite enough works into her where I really wanted to run her quite yet, but looking at the schedule and trying to hopefully get her on the (Kentucky) Oaks trail, I figured if we don’t get her started this weekend it was going to be hard to get there. We were a little short on works, but she showed her class and her ability to overcome it.

"I looked at the fractions and she was right up on it, which I expected, but I thought she was very vulnerable the last sixteenth knowing that I was a couple works short. But she dug in and showed her class.

"The way it turned out, she was able to dig in and get it done and I think she'll get a lot out of it, fitness-wise. I’ll just have to evaluate how much time she needs to recover from this effort because she was quite tired when she came back.

"I'd like to run her twice more before the Oaks. (The March 2 Davona Dale Stakes [G2]) would be the logical thing to do, so hopefully if she’s not too knocked out from this and it’s just a matter of getting the fitness she needed, she’ll be ready to go in four weeks. But, if not, we’ll just wait a little longer."

"I got a good trip, she broke well and put me in a good position. She just waited for me to ask her to run and responded great." 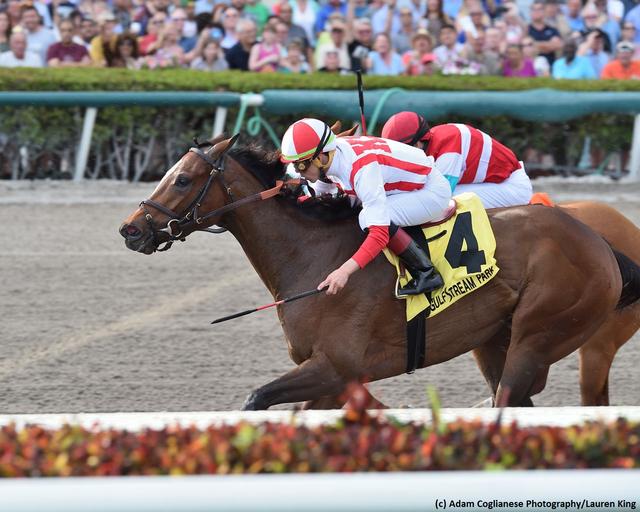