Trainer Mike Maker scored his sixth victory in the $217,010 Jeff Ruby Steaks (G3) at Turfway Park Saturday, thanks to a determined effort by Field Pass to get by the 13-10 favorite Invader.

The Three Diamonds Farm runner could have banked 20 points toward the Kentucky Derby (G1), but Field Pass is not Triple Crown-nominated. Maker’s immediate postrace quotes indicated that his Derby Day target is likelier to be on his preferred surface – turf.

“I’ll discuss it with the Wycoffs (the owners), but I’m guessing the American Turf (G2) on Derby Day,” the trainer told Turfway publicity.

Field Pass has established his class on turf. After breaking his maiden at Saratoga last summer (over future Summer [G1] winner Decorated Invader), the gray placed in the With Anticipation (G3) and finished fourth in the Laurel Futurity and Bourbon (G3). His lone dirt attempt resulted in a sixth in a Churchill Downs allowance last fall. Field Pass reverted to turf for his sophomore bow in the Feb. 1 Dania Beach and got up by a neck.

“I try to bring some of my better turf horses for the Ruby,” Maker said. “It’s paid off over the years. He ran a great race off the bench in the Dania Beach in a very competitive field and I thought he would run very well here.”

Indeed, Field Pass not only ran very well, but showed the same resolve to overtake a talented opponent in Invader. That hot favorite stalked another Maker trainee, Fancy Liquor, in the early going, while Field Pass tracked him in turn.

Invader increased the pressure on Fancy Liquor, who proved resilient as they battled into the stretch. Field Pass dropped a little further back momentarily, but regained his momentum the further they went. Although Invader finally wore down the stubborn Fancy Liquor, he could not withstand Field Pass.

With his stamina kicking in as a son of Lemon Drop Kid, Field Pass thrust his neck in front while completing 1 1/8 miles in 1:49.34.

“He broke sharp coming out of there,” Ortiz said. “He put me in a good spot in third, outside the favorite and I tried to wait. I was close; I wasn’t too far back. When I asked him, it took some time to get going. It wasn’t easy to catch him (Invader), but he got the job done. They went a little slow, my horse wanted to go really bad and I didn’t want to struggle with him, so I let him go.” 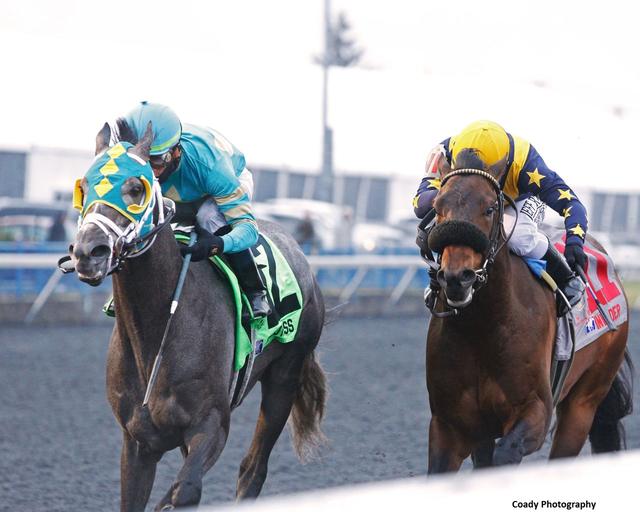