Finite imposes her will late in Silverbulletday 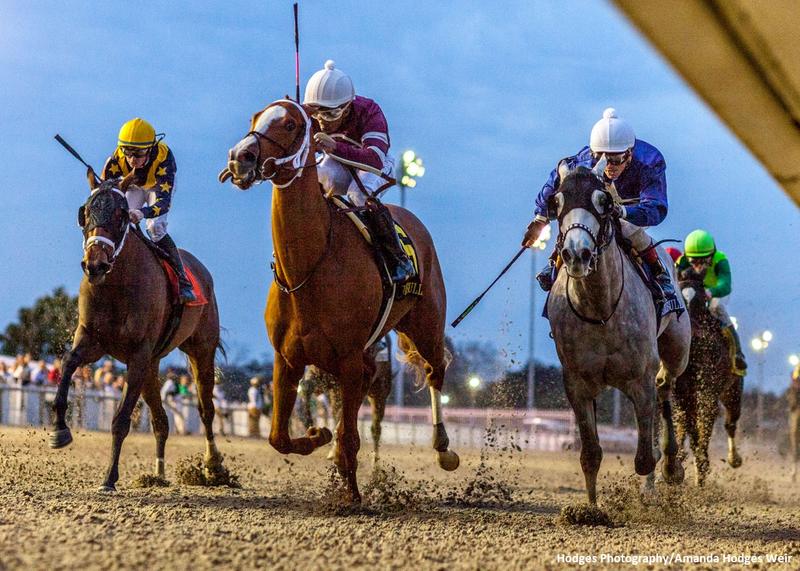 As the Kentucky Oaks (G1) hopefuls dueled down the stretch of Saturday’s $148,500 Silverbulletday at Fair Grounds, Finite looked vulnerable to upset-minded Ursula. But the 3-5 favorite kept finding more to force her neck in front at the wire, handing Hall of Fame trainer Steve Asmussen a milestone 1,000th stakes win.

Finite was heavily favored on the strength of her wins in last fall’s Rags to Riches S. and Golden Rod (G2), both at Churchill Downs. Ursula, a 16-1 overlay, was a wild card in her first try at a route of ground, and the well-bred daughter of Tapit relished the opportunity. By almost wiring the Silverbulletday, Ursula paid a handsome compliment to the filly who beat her last time – Taraz, who is reportedly bound for the Feb. 1 Martha Washington at Oaklawn Park, and maybe a shot at the Kentucky Derby (G1) trail.

As Ursula set the pace in the Silverbulletday, His Glory tracked in second, and Finite was perched in a chasing third on the outside. His Glory couldn’t maintain her position entering the stretch, when Finite advanced to challenge Ursula.

Wider out, Portrait was also uncorking a bold move to make it a three-way tussle. Perhaps her lack of a recent race told the farther they went down the long Fair Grounds stretch. Unraced since her third as the favorite in the Sept. 14 Pocahontas (G2), Portrait began to hang. Then Tempers Rising, well back early, rallied strongly to overtake her in third and draw nearer the top two.

Ursula refused to succumb to Finite until the final yards, when the favorite prevailed in the dogfight. By finishing the mile and 70 yards in 1:42.73, Finite earned 10 more Oaks points to go along with her 10 from the Golden Rod. The chestnut’s total of 20 is good for third on the leaderboard to Bast (34 points) and presumptive champion juvenile filly British Idiom (30).

Runner-up Ursula banked 4 points, and Tempers Rising, just a head away in third, took home 2 points for their terrific first tries in a scoring race. Portrait was another length back in the blanket finish, adding 1 point to her prior 2 from the Pocahontas for a total of 3. His Glory tired to fifth, followed by Pass the Plate, She Can’t Sing, and Maga Suite.

A Winchell Thoroughbreds homebred campaigned in partnership with Thomas J. Reiman, William Dickson, and Deborah Easter, Finite extended her winning streak to four. The daughter of Munnings opened her career with a pair of seconds in Saratoga maidens last summer. She promptly scored when switching to turf at Kentucky Downs, then rolled by six back on the dirt for the Rags to Riches. Finite had to dig deep in the sloppy Golden Rod, and her good attitude was on display again to advance her record to 6-4-2-0, $458,349.

Thus Tapit’s signature was all over the Silverbulletday. Aside from Finite and Ursula fighting out the exacta, Portrait is a granddaughter of Tapit, being by his son Tapizar. Indeed, the Tapit theme was pronounced at Fair Grounds on Saturday. The outstanding sire was also responsible for the winner and third in the Louisiana (G3), Silver Dust and Gun It, and the hero of the Lecomte (G3) on the Road to the Kentucky Derby – Enforceable. 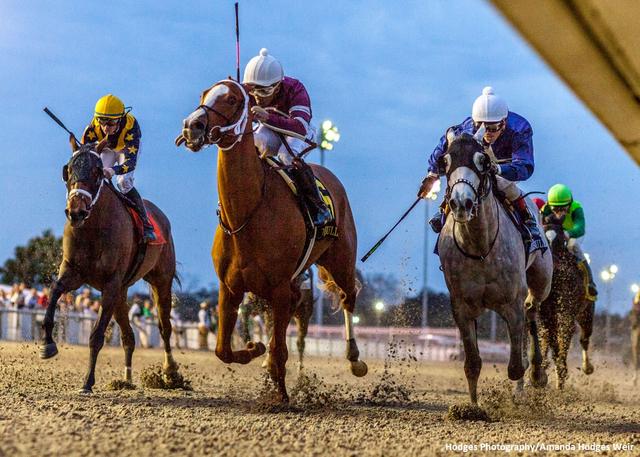