Finnick the Fierce Scratches From Kentucky Derby; Tiz the Law, Honor A. P. Have Routine Gallops On Derby Eve

LOUISVILLE, KY (Friday, Sept. 4, 2020) – Arnaldo Monge and trainer Rey Hernandez’s Finnick the Fierce was declared out of Saturday’s 146th running of the $3 million Kentucky Derby Presented by Woodford Reserve (GI) by his co-owners.

With the scratch of Finnick the Fierce, the inside stall and outside three stalls in the 20-horse starting gate will remain open for the field of 16 starters. Program numbers remain unchanged.

With the first good weather morning since Tuesday, all 16 entrants for the Run for the Roses trained over a fast track Friday morning on the eve of the 146th running of the $3 million Kentucky Derby Presented by Woodford Reserve (GI).

Among the horses galloping during the 5:15-5:30 (all times Eastern) training window reserved for Derby and Oaks entrants were morning line Derby favorite Tiz the Law and second choice Honor A. P. who were two of the first horses on the track.

Trainer Dale Romans reported everything is ready to go for the Ellis Park Derby runner-up.

Friday’s clear skies were welcome after rain had soaked the Louisville area the previous two mornings. Derby and Oaks contenders were given a special training slot from 5:15-5:30 Friday and, after Oaks favorite Gamine stretched her legs with a race-day gallop, Authentic came on the scene under Humberto Gomez for a couple of laps around beneath the Twin Spires.

Thousand Words then emerged just after the special training period concluded and also galloped under Gomez.

Both colts are aiming to give Baffert what would be a record-tying sixth Kentucky Derby victory Saturday. Authentic has won four of five starts and bested Ny Traffic last time out in the Haskell Stakes (GI) on July 18.

“In the Haskell it looked like it he was going to be coming up short but a lot of it was he just shut it down early,” Baffert said. “But he’s training really well, he’s coming up to the race in great shape. He’s the kind of horse where he looks around like in the stretch, I told (jockey) Johnny (Velazquez) if we’re lucky and we turn for home and he’s right there you have to keep him busy because he does check things out.”

Thousand Words, who is owned by Albaugh Family Stables and Spendthrift Farm, has been training forwardly since defeating Honor A. P. in the Shared Belief Stakes on Aug. 1.

“He’s a horse who can be a little bit tough mentally. But all of the sudden he started doing really well,” Baffert said of the son of Pioneerof the Nile. “He’s a horse where he’s getting closer, his numbers are getting tougher and tougher. But everything has to go right for him. He’s that kind of horse.”

ENFORCEABLE – Having arrived from Florida Thursday afternoon, Hall of Fame trainer Mark Casse was on hand at Churchill Downs Friday morning to see for himself the form John Oxley’s Enforceable is bringing into his Kentucky Derby run.

With assistant trainer David Carroll in the irons, Enforceable again looked like a horse wanting to do more as he galloped during the 5:15-5:30 a.m. exclusive training period for Oaks and Derby contenders. The son of Tapit -- who is a full brother to graded stakes winner Mohaymen -- has been eager in his morning outings all week and could end up closer to the pace Saturday than is typical for his late-running self.

“I was saying to David that I think he may be a little more forwardly placed than usual,” Casse said. “He’s really on his game. In the Blue Grass Stakes (in which he finished fourth) he broke much better than he had been breaking and going 1 ¼ miles, I don’t know that the pace is going to be crazy. So we’re not going to take him back. We’re going to let (jockey) Adam (Beschizza) place him wherever he feels comfortable but I’m going to think he’ll be more forwardly placed.”

FINNICK THE FIERCE -- Arnaldo Monge and trainer Rey Hernandez’s Finnick the Fierce was declared out of Saturday’s 146th running of the $3 million Kentucky Derby Presented by Woodford Reserve (GI).

“Because he’s blind on the right eye, he carries himself a little funny,” Mongesaid. “And we always knew that. But ever since he arrived, the vets have been keeping an eye on the horse and I’m telling Rey ‘well, they’re concerned about this’ and there might be a legitimate reason but a regular vet doesn’t seem to think so. So we’re always trying to do the best for the horse so we made the decision (to scratch) because we don’t want to go tomorrow and we’re all excited and then he gets scratched at the post. So we always said this is a horse for the long term. It was an honor to be selected (for the Derby) but at the end of the day the most important thing is the horse. Maybe we are missing something I don’t know, but I think the plan is to do more diagnostics on him and if everything is OK we’ll run another day. What can we do, that’s life.

“I didn’t notice anything but it was always the right front. That’s the same side as his eye and it’s always been that way. Rey rides the horse and said ‘this horse is fine’ and that he didn’t feel anything. I don’t know. I know horse racing is under scrutiny all the time so I understand not trying to risk that publicity.

“We’ll have to see what comes out of this next diagnostic test. Just to be on the up and up, we’ll probably send him to Rood and Riddle and get an independent opinion on the horse. If all is good, (the Preakness) could be a consideration. Maybe the Breeders’ Cup. Rey wanted to turn him out after the Derby anyway but it will depend on how this comes out. It’s a bummer but we’ll be back.”

The Dialed In gelding, who was seventh in the Blue Grass Stakes (GII) in his most recent start, had jogged, then galloped Friday morning with Hernandez aboard.

HONOR A. P. – C R K Stable’s Honor A. P. was the first Kentucky Derby contender to set foot on the track Friday morning at 5:15 and galloped 1 5/8 miles with Javier Hernandez aboard and trainer John Shirreffs keeping close watch.

After watching the gallop Shirreffs was all smiles, but modest when complimented about how good his Santa Anita Derby winner looked.

“When you get to this level, they all look good,” said Shirreffs, who is seeking his second Kentucky Derby victory after pulling the upset with Giacomo in 2005.

With exercise rider Margarito Fierro in the saddle alongside of Brian Theallaboard stable pony Alejandro, Major Fed will attempt to put his starting gate woes behind him in the Derby.

“We’ve gotten pretty unlucky at the start,” trainer Greg Foley said. “We schooled him a couple of times this week at the new gate and in the morning in the paddock. We just need things to go our way for once at the start.”

MONEY MOVES – Outfitted with his Kentucky Derby saddle towel, Money Moves galloped during the special 5:15 a.m. training period for Oaks and Derby contenders as trainer D. Wayne Lukas -- who is overseeing the colt’s conditioning on behalf of his protégé Todd Pletcher -- kept watch astride his saddle horse.

NECKER ISLAND – One of the last Derby horses to train Friday morning, Necker Island jogged once around under Hillary Hartman and then stood in the Kentucky Derby starting gate located in the mile chute.

Among those looking on with trainer Chris Hartman was Wayne Scheer from South Dakota, who owns Necker Island in partnership with Raymond Danielsand Will Harbut Racing.

NY TRAFFIC – John Fanelli, Cash is King, Paul Braverman and Team Hanley’s Ny Traffic made the good impression as he came out at 5:15 a.m. and galloped 1 ½ miles around the Churchill track.

Trainer Saffie Joseph Jr. participated in some the top 3-year-old races last year with Math Wizard, who hit the board in both the Ohio Derby (GIII) and Indiana Derby (GIII) before a breakout win in the Pennsylvania Derby (GI), but Ny Traffic is the first Classic starter for the 33-year-old trainer, a native of Barbados who has been training in the U.S. since 2011.

“The Derby means everything to me,” Joseph said. “That’s why we came here. We hoped to one day win the Kentucky Derby and now to be in the position where we have a chance, we are very fortunate and blessed. We are just trying to take it all in.”

SOLE VOLANTE -- After jogging Monday through Thursday, Reeves Thoroughbreds and Andie Biancone’s Sole Volante was reunited with jockeyLuca Panici for a strong 1 ½-mile gallop during the special 5:15 a.m. training time restricted to Oaks and Derby horses.

SOUTH BEND – It was another smooth morning for Bill Mott trainee South Bend as he galloped during the special 5:15 a.m. training session. Assistant trainerKenny McCarthy continues to be pleased with what he is seeing from the son Algorithms, who is attempting to make Mott the first trainer since Bob Baffert in 1997-98 to win the Kentucky Derby in consecutive years.

STORM THE COURT – Breeders’ Cup Juvenile (GI) winner Storm the Courtjogged a quarter-mile and then galloped a mile under Thomas Dubaele at 7:30 Friday morning.

Trainer Peter Eurton said Storm the Court would not go to the track Saturday morning in advance of his Derby run.

Owned by the partnership of Exline-Border Racing, David Bernsen, Susanna Wilson and Dan Hudock, Storm the Court will be ridden for the first time Saturday by Julien Leparoux.

Eurton, who is saddling his second Derby starter, was asked about the ideal scenario for Storm the Court to notch his first victory of 2020 Saturday.

“The others break a step slow and we break fast and they have to catch us,” Eurton said with a laugh. “The break is everything. If the pace is fast, we will be four to six lengths off it but if it is not a fast pace, we will be up on it.”

“He had a very nice gallop,” Tagg said. “Right speed. Everything was comfortable. He pulled up nicely and came back nicely. We’re all good. He’ll jog once around tomorrow.”

The Constitution colt has won six of seven starts laying close to the pace and making one run at the top of the stretch. His trainer is hoping for a similar trip in the Derby.

“I’d like for us to be laying third all the way around until we get down for business,” Tagg said. “I’m very confident in our horse. He’s a very nice colt. I hope he wins it. He’s a good horse, good horses do good things.”

Next to Tagg and his partner/assistant Robin Smullen, the person who knows Tiz the Law the best is Heather Smullen, niece of Robin.

“He’s good,” Heather Smullen said. “He does everything you ask him to do. He’s very happy with himself and moved well over the track this morning (Friday).”

To access Newsfeed footage & News Conferences via web browser, enter this information into your browser address bar: kyderby.hammondcg.com. You will receive a prompt to enter a username and password. 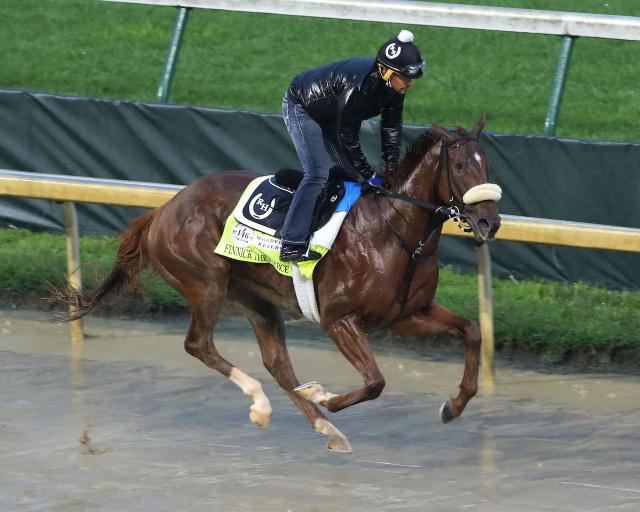