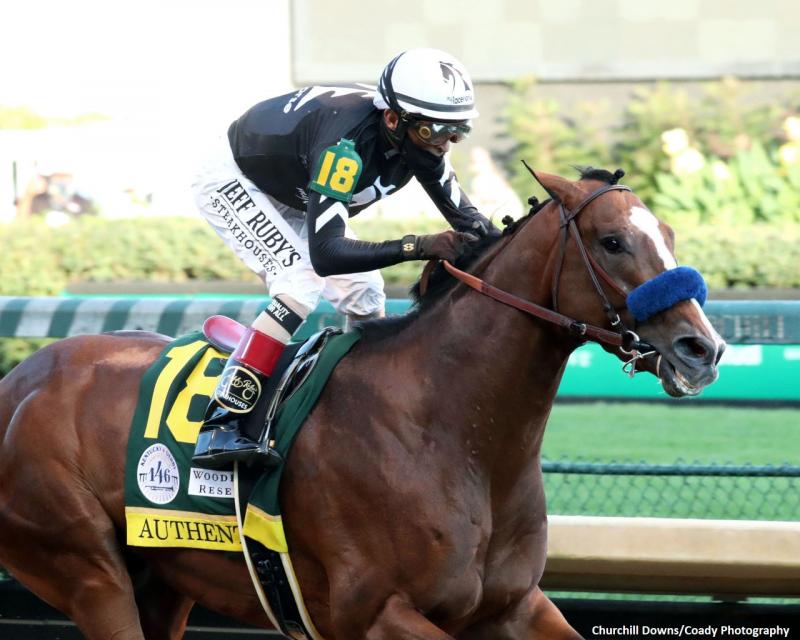 With the expected news that Kentucky Derby (G1) runner-up Tiz the Law would bypass the Oct. 3 Preakness (G1), only a couple of rivals from Churchill Downs are advancing along with Derby winner Authentic to Pimlico.

Mr. Big News and Max Player, the respective third and fifth in the Run for the Roses, are confirmed for the Preakness. The other Derby runner who has been mentioned as possible is eighth-placer Ny Traffic.
Max Player, the most consistent of that trio, is poised to become the only horse to compete in all three jewels of the pandemic-scrambled 2020 Triple Crown. The winner of the Withers (G3) back in early February, the son of champion Honor Code was third to Tiz the Law in both the Belmont (G1) and Travers (G1).
Ny Traffic was also a familiar face on the trail ever since his third in a division of the Risen Star (G2) Feb. 15. A progressively closer second in the Louisiana Derby (G2), Matt Winn (G3), and finally the Haskell (G1) where he missed by a nose to Authentic, the gray didn’t have the smoothest run in the Kentucky Derby.
Mr. Big News had the least productive experience in his Derby scoring races, winding up fifth in the same Risen Star division as Ny Traffic and sixth in the Blue Grass (G2). His stakes win came in a race that didn’t offer points, the May 2 Oaklawn S. Indeed, the original plan wasn’t to run in the Derby, but the American Turf (G2) on the undercard. Connections made a late decision to enter, and Mr. Big News rewarded the call to exceed expectations in third.
As deep closers, Mr. Big News and Max Player are typically going to have a hard time trying to make up enough ground against Authentic. They’d need a pace collapse to help their chances. Ny Traffic’s forward style keeps him closer to Authentic early, but he still needs to find a way to pass him.
A rematch with Tiz the Law would be something to savor, and we’ll have to wait for the Nov. 7 Breeders’ Cup Classic (G1) to see it. Tiz the Law reportedly needed more time to bounce back from the Derby, so the strategy is for him to train up to the Breeders’ Cup at Keeneland.
Thus Authentic’s most significant Preakness challenge is likely to come from a new opponent.
The obvious threat is Art Collector, who would have been the second choice in the Derby before an ill-timed foot problem knocked him out. Thankfully, it was minor, and the Blue Grass and Ellis Park Derby hero is all set to take his chance in the Preakness. Given his tactical speed and stamina, Art Collector is just the type of rival capable of putting up a fight against Authentic.
Authentic has a similar foe lurking in his own shedrow in Thousand Words. Scratched from the Derby after flipping over in the paddock, the Bob Baffert trainee was in the form of his life after a front-running upset of Honor A. P. in the Shared Belief at Del Mar.
Another able to keep tabs on Authentic early is Pneumatic. The well-bred son of champion Uncle Mo has been on a learning curve through his third in the Matt Winn and fourth in the Belmont, and he put it all together with a decisive victory in the Pegasus at Monmouth last out. Pneumatic is arguably the best of three Preakness contenders for trainer Steve Asmussen, along with Max Player and comebacker Excession, sidelined since his second to Nadal in the Mar. 14 Rebel (G2).
As many as five Preakness candidates were last seen at Saratoga. The top four from the Sept. 5 Jim Dandy (G2) are in the discussion, although not all at the same level of commitment. The victorious Mystic Guide is possible, while runner-up Liveyourbeastlife and third Jesus’ Team are definite, and fourth Dr Post might be sliding to the questionable side of the fence. Peter Pan (G3) winner Country Grammer, fifth in the Travers, is under consideration according to Horse Racing Nation.
Unbeaten Happy Saver punched his ticket in the Sept. 7 Federico Tesio, but might not use it. Like his stablemate Dr Post, the Todd Pletcher pupil could instead try older horses in the Oct. 10 Jockey Club Gold Cup (G1).
Kentucky Oaks (G1) runner-up Swiss Skydiver is entertaining the idea of the Preakness, but trainer Ken McPeek has options to keep her with distaffers at Keeneland, namely the Oct. 4 Spinster (G1) or the October 10 Queen Elizabeth II Challenge Cup (G1) on turf. Swiss Skydiver took on the boys once before, placing second to Art Collector in the Blue Grass.
The picture will be clarified when entries are drawn Monday.