The bay son of Malibu Moon kept the pressure on pacesetter American Anthem throughout the mile contest before challenging him rounding the turn. The duo battled it out all the way to the wire, with Gormley just getting his head in front at the crucial moment for a final time of 1:35.89 on the sloppy, sealed main track.

The win catapulted the John Shirreffs trainee into second place on the Kentucky Derby Leaderboard.

Gormley captured his initial two starts last fall, breaking his maiden by 4 1/4 lengths at Del Mar on September 4 and then scoring in the October 1 FrontRunner Stakes (G1) by three lengths. The Kentucky-bred colt bobbled at the start of the Breeders’ Cup Juvenile (G1) when making his last start and ended up fading to seventh in that November 5 contest.

However, his FrontRunner win awarded Gormley 10 points toward a starting berth in the 2017 Kentucky Derby and Saturday’s victory saw that total boosted to 20 points, just 10 shy of Breeders’ Cup Juvenile hero Classic Empire in first with 30 points.

American Anthem debuted on the Leaderboard in the 18th spot with four points. The Bob Baffert pupil broke his maiden in his first outing on December 3 at Del Mar and was making his stakes bow in this spot.

Big Hit and Bird is the Word also made their first appearances on the Kentucky Derby Leaderboard after finishing third and fourth, respectively, in the Sham. Big Hit, who broke his maiden last out by 3 1/4 lengths on November 19 at Del Mar, earned two points while maiden Bird is the Word garnered one point.

“It was nice yes. I expected him to run the way he ran today. I know he’s still improving but I think he only gets better and better. Hopefully, he gets a lot better, but with this race and his next, he has a lot of potential to keep growing.

“It didn’t surprise me how well he broke out of there today. When he’s feeling good, he breaks quickly and already running. In the Breeders’ Cup he broke slow but today he came into the race in really good shape and got into it right away.”

“That was a great race. He’s still young. You never know what they’re going to do so it’s always interesting. We’re very proud of him.

“He’s quick. He starts quick, he gets away quickly. But then he checks himself as he gets into the race and he relaxes. It was great to see him pick it back up again and get it done.

“(Jockey) Chantal (Sutherland who has been working him in the mornings) has given me a lot of confidence in how he’s doing. She’s a rider who really understands what is going on underneath her and is very expressive about it, so she’s been a big help.”

“This type of thing never gets old. He’s got a lot of heart and I know he’ll go further than this. John’s doing all the right things as usual. This was a beautiful horse race and the fans got a thriller. No idea where we’ll run next.”

“For only his second time out, that was pretty impressive. If we’d been on the outside…I think that probably would’ve helped a little bit getting beat a half a nose.” 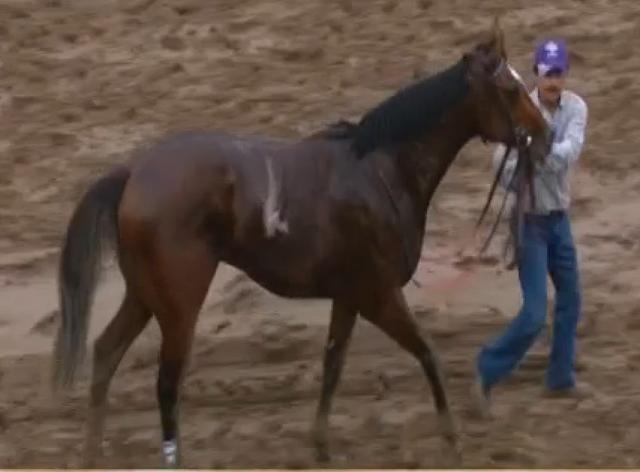