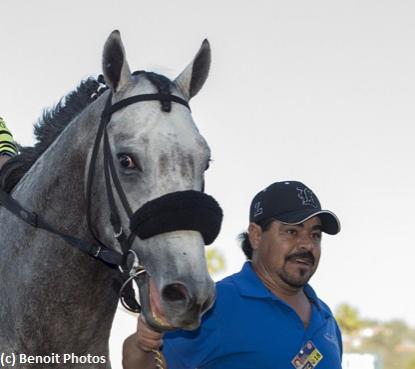 A dozen juveniles, including the top three from the Clever Trevor Stakes and the winner from the Bob Hope Stakes (G3), have been entered to go eight furlongs in Sunday evening’s $400,000 Springboard Mile at Remington Park.

The contest makes its debut this year as part of the Road to the Kentucky Derby series of points races, and is worth 10-4-2-1 points to the top four finishers.

Half of the field has prior stakes experience, but Greyvitos is the only one with graded credit to his name. The Adam Kitchingman trainee opened his career over the summer with an eighth-place run going a grassy mile at Santa Anita Park, then returned this fall to be third on that venue’s dirt while shortening up to 5 1/2 furlongs. The gray son of Malibu Moon wired the seven-furlong Bob Hope most recently on November 11 at Del Mar, and retains the services of jockey Victor Espinoza for this season-ending race.

Redatory, Bode’s Maker and Flat Lucky were 1-2-3, respectively, in the Clever Trevor Stakes over the track on November 3.

The Allen Dupuy-trained Redatory prevailed in wire-to-wire fashion by 2 1/4 lengths to move his record to a perfect two-for-two under returning jockey David Cabrera. Conditioner Allen Milligan will give a leg up to Floyd Wethey Jr. for the third straight time on Bode’s Maker, who posted a nice closing second in the Clever Trevor one race after breaking his maiden going a mile at Remington. Flat Lucky reunites with jockey Ramon Vazquez after the pair finished third in the Clever Trevor for Steven Asmussen.

Major Brown also ran in the Clever Trevor, but didn’t factor in the contest when finishing 11 lengths behind Redatory in eighth. The Michael Whitelaw-trained chestnut broke his maiden on turf prior to that by four lengths at Remington and returned on November 25 to wire an allowance/optional claimer going a mile on the track’s dirt. Deshawn Parker was aboard for that last victory and keeps the mount here.

Night Strike is the final runner in this field with prior stakes experience. The Bret Calhoun pupil actually broke his maiden when taking the one-mile Don C. McNeill Stakes at Remington Park on November 25. The dark bay son of Liaison had tried maidens five times prior to that, with his best finish coming as a runner-up effort on September 8. Iram Diego has the call for the first time on Night Strike in this spot.

Five of the remaining six Springboard Mile contestants are maiden winners, with the sixth scoring against allowance/optional claiming rivals in his most recent appearance.

Believe in Royalty made his racing debut at Delaware Park, finishing third for trainer Larry Jones, before getting his initial score at Laurel Park on October 9 by 2 1/4 lengths. The Tapit colt stayed at that Maryland track to take an eight-furlong allowance/optional claimer in wire-to-wire fashion and receives a jockey switch to Robby Albarado for this first try against stakes rivals.

Kingsville ran second to Major Brown in the November 25 allowance/optional claimer, one race after breaking his maiden by a head going a mile at Remington Park. Combatant, Brangelina, Flip the Coin Jan and Soul P Say all are last-out maiden winners. 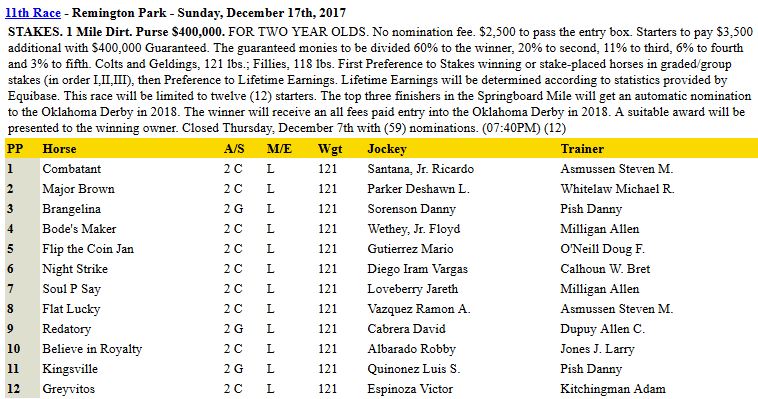 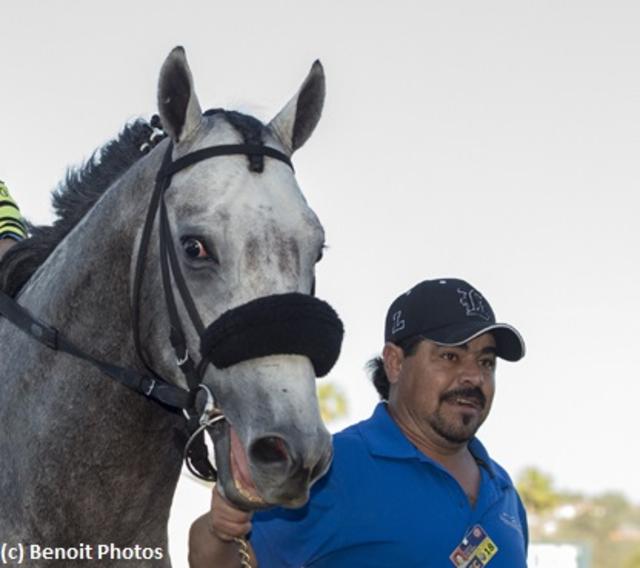