A multiple graded stakes winner, Gunnevera had plenty of experience but his BRIS Speed ratings were lacking entering the March 4 Fountain of Youth (G2) at Gulfstream Park. He stepped up while rallying last-to-first in the 1 1/16-mile race, generating a 102 figure for the 5 ¾-length thrashing, one of the better numbers in a 2017 Kentucky Derby qualifier.

From the first crop of up-and-coming sire Dialed In, Gunnevera utilized a dramatic closing kick recording juvenile stakes wins in the Saratoga Special (G2) and Delta Jackpot (G3) but earned relatively modest BRIS Speed and Late Pace numbers for those efforts. He finished a non-threatening fifth to Classic Empire when tested for class in the Breeders’ Futurity (G1) at Keeneland last October and had much to prove entering his 3-year-old season.

The Antonio Sano-trained colt has changed the narrative in a pair of outings this year. Gunnevera may not have offered Irish War Cry a serious challenge in the February 4 Holy Bull (G2) at Gulfstream, but he would’ve been closer if not forced to stop while advancing on the far turn, re-rallying commendably to be a clear second while earning career-best BRIS numbers

He took another step forward in the Fountain of Youth, garnering a 107 Late Pace number for an eye-catching turn of foot in the short stretch, and four-time reigning Eclipse Award-winning jockey Javier Castellano (who is seeking first Kentucky Derby win) has the call aboard the chestnut.

Gunnevera is thriving presently but can’t afford to rest on his laurels – he needs another strong showing in his final prep, the $1 million Florida Derby (G1) on April 1, to justify his status as a top contender for the Kentucky Derby.

Practical Joke, a multiple Grade 1 winner last year and making his first start since a third in the Breeders’ Cup Juvenile (G1), offered a big middle move before leveling off and wound up edging pacesetter Three Rules by a half-length for second. He received only a 95 BRIS Speed rating, a number on par with his juvenile figures, and Practical Joke will need much better next time to establish himself as a viable contender. 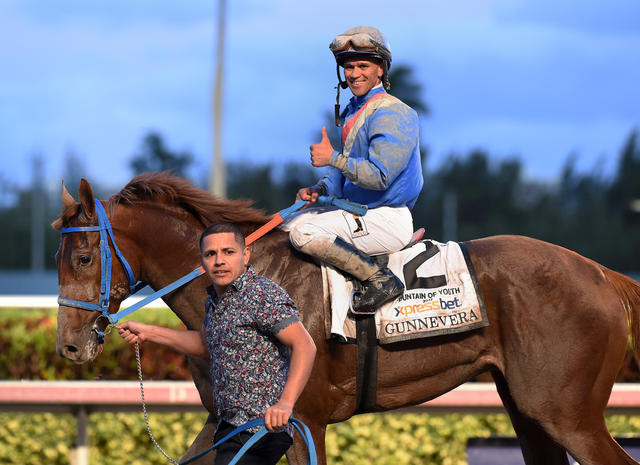