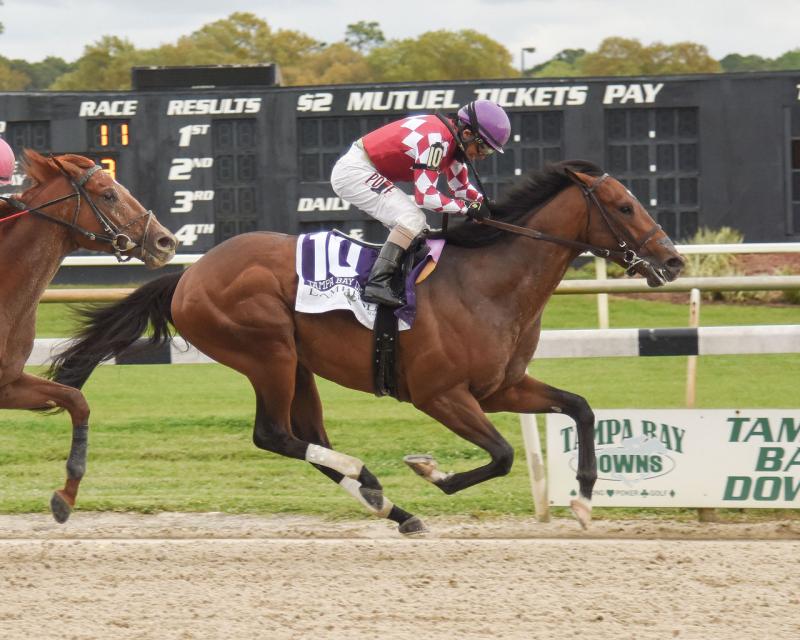 Helium was not only fit but also tough as nails when it counted in Saturday's $350,000 Tampa Bay Derby (G2) for owner D J Stable and trainer Mark Casse.

Making his first start since Oct. 18, as well as his first ever on conventional dirt and around two turns, Helium raced near the rear of the field but in the clear down entering the backside under Jose Ferrer. Advancing five-wide from 10th into a contending position around the far turn and into the stretch, Helium sustained the drawn-out momentum and hung tough when challenged by second choice Hidden Stash. Turning back that rival, Helium won the 1 1/16-mile fixture by three parts of a length.

"This horse is something because he got away a little slow today and we had planned on him being closer," Casse said. "He made that big wide run, he made the lead but (after Hidden Stash rallied) I was going to be happy with second. I thought, we can build on this, because this is only his third start and there is a lot of room for improvement. What was amazing is that he wasn't overly exhausted after the race. He's a beautiful horse, he's bred to run all day long and he looks like a Derby horse, so it's exciting."

Sent off at 15-1, Helium paid $32.80 after finishing in 1:43.55 over a fast track. Hidden Stash was second and was followed by longshots Moonlite Strike and Unbridled Honor in third and fourth, respectively. The order of finish was completed by King of Dreams, Awesome Gerry, Sittin On Go, Boca Boy, My Liberty, Super Strong, 8-5 favorite Candy Man Rocket, and Promise Keeper.

As part of the Road to the Kentucky Derby series, the Tampa Bay Derby was worth 50 qualifying points to the winner. However, as Helium isn't presently nominated to the Triple Crown, he has yet to officially secure those points. Hidden Stash earned 20 points, increasing his total to 22. Moonlite Strike earned 10 points and now has 11 in total, while Unbridled Honor now has five points.

Helium remains undefeated through three starts. Both of his wins last season occurred at Woodbine, over their Tapeta main track, and both were over seven furlongs. After a 3 1/4-length maiden victory first out, Helium won the Display S. by 4 1/4 lengths. He's now earned $287,763.

"He trained well enough that we thought he deserved a chance," Casse said. "Again, I have to give so much credit to Nick Tomlinson who had him down at Palm Meadows for us. We had thought about running in the Gotham (G3) and thought, if we're going to try the dirt, let's run him close to home. It worked well for us."

Bred in Kentucky by Teneri Farm and Bernardo Alvarez Calderon, Helium was a $55,000 Fasig-Tipton October yearling. By Grade 2 turf star Ironicus, he was produced by the stakes-winning Thundering Emilia, a daughter of Thunder Gulch who hails from a family that includes multiple Group 1 winners in Peru. 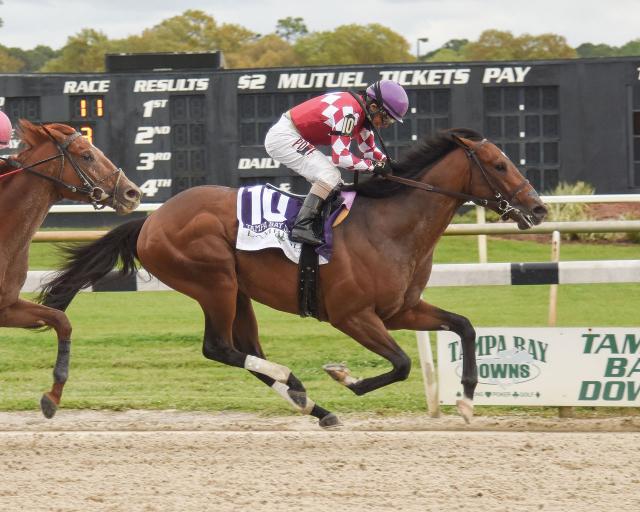