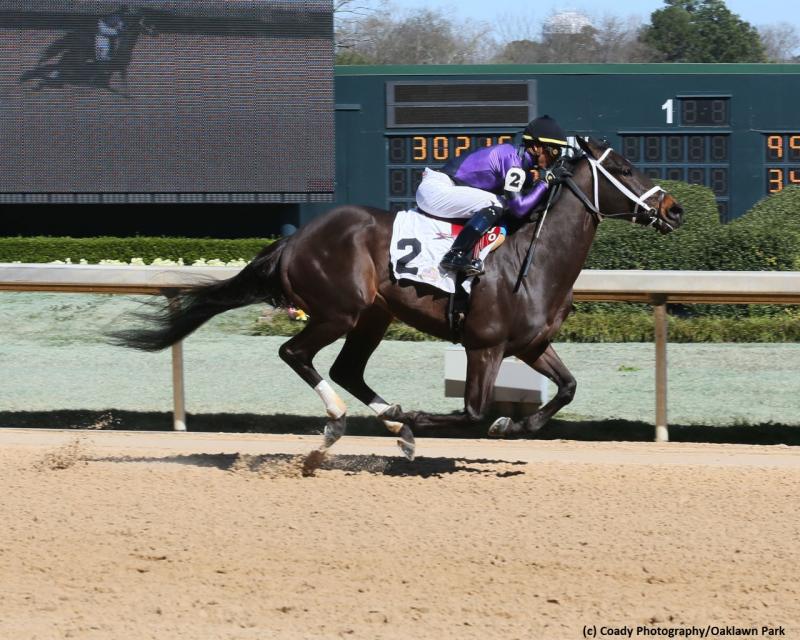 Ten Strike Racing and Madaket Stables' Warrior's Charge has dominated a pair of allowance fields at Oaklawn Park en route to being entered in the $1.5 million Preakness (G1) at Pimlico on Saturday. The three-year-old colt, who was not Triple Crown nominated, will be supplemented to the race for $150,000 by his connections.

Warrior's Charge has won or placed in each of his five lifetime assignments. The son of Munnings ran well in his lone juvenile outing at Churchill Downs in November. He broke slowest of all from the 11 post but rallied into contention to finish a nice third, two lengths adrift subsequent multiple stakes winner Gray Attempt.

Third in a six-furlong sprint at Oaklawn Park to kick start 2019, the Florida-bred finished in that same spot when facing maiden special weight foes over one mile at the same venue.

In his fourth lifetime start, on March 16, the colt went to the front from his rail post and never looked back en route to a six-length maiden victory. He followed that up with his most recent powerful performance, leading at every call once again to post a 6 1/2-length allowance romp.

The dark bay colt was bred in the Sunshine State by Al Shaquab Racing and is the first foal out of the stakes-placed Broken Vow mare Battling Brook. She also has unnamed yearling and weanling fillies, both by Khozan.

Warrior's Charge has shown steady progression this season when going a route of ground. He dons BRIS Speed figures of 86-93-99 in his last trio of races, and boasts credible BRIS Late Pace numbers of 94-103-98 along the way.

He has upped his game in a big way since getting involved from the break in his last pair and will likely be part of the early proceedings on Saturday. Warrior's Charge has never faced stakes foes, and his pedigree does not suggest that he will be his best at classic distances.

However, the dark bay colt is in peak form and his early presence is a nice asset to possess at Pimlico. His owners are putting up a large sum to run in the second leg of the Triple Crown, and one has to take notice of their confidence level. Warrior's Charge could be a factor in the Preakness if he moves forward once again and receives a sensible trip.