How Nyquist got his name

Whenever you’re trying to figure out how a Thoroughbred was named, the answer often falls into one of two categories: a reference to the parent(s), or something meaningful in the life of the owner.

Kentucky Derby (G1) favorite Nyquist obviously doesn’t fit the first instance, being by Uncle Mo out of Seeking Gabrielle. But he does fit the second.

“Nyquist is all class,” Reddam recently told CNBC’s Jessica Golden. “If you asked me to describe Nyquist the hockey player, he's very classy, soft-spoken and plays the game at a high level.”

In this case, the name proved apt. Over the years, Reddam has named a number of his horses after Red Wings players – from Datsyuk, Lindstrom, and Zetterberg to Mrazek, Kronwall and Tatar. None, however, have turned out to be anywhere near as good as Nyquist.

Last October, Reddam spoke of how happy he was that Nyquist the horse has lived up to the standard set by his namesake.

“I’ve been a Nyquist fan for a couple of years,” Reddam told Bob Duff of the Windsor Star. “To me he’s got kind of a special talent. He’s a tremendous stickhandler.

“It’s kind of exciting to have named the horse after him and find out that the horse is a superstar.”

The NHL’s Nyquist is also pleased with the colt’s success, although he’s on a learning curve when it comes to the horse racing scene.

“I saw it a few weeks ago when he won some big tournament,” he told Duff in the same article. “Hopefully the horse keeps running fast.”

Now that the Red Wings are out of the Stanley Cup playoffs, Nyquist has time on his hands. And he could be at Churchill Downs to watch the equine Nyquist in the Derby. That would mark the first time the two Nyquists have crossed paths. So far, he’s only watched race replays online.

“It's a little different when you hear your name mentioned in a horse race and not a hockey game,” Nyquist recently told NHL.com’s Paul Harris.

If the human Nyquist does make Derby Day at Churchill Downs, he’ll see that it’s also a “little different” from his rare visits to the racetrack in his native Sweden.

“It's a big sport in Sweden,” Nyquist told Ansar Khan of mlive.com last November, “but for some reason I've never really gone for it. I've been to one or two (races) maybe in Sweden just for the fun of it. I have friends who watch a lot of horse racing.

“I've never really watched that many races because I've not been too much into horses, but maybe this makes me watch more.”

A brilliant, unbeaten champion has that effect on people. For more on Nyquist the horse, check out his 2016 race recaps – the San Vicente (G2) and Florida Derby (G1) – and watch how Nyquist dusts his stablemate in his last workout. 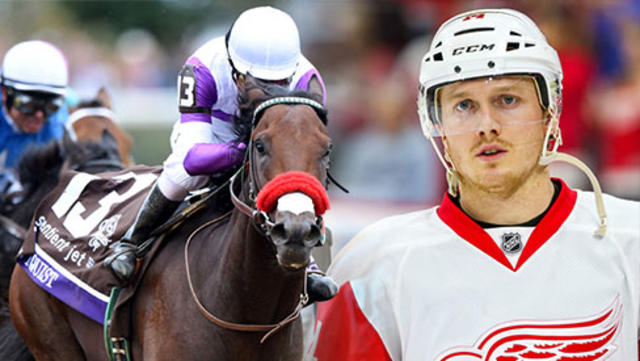