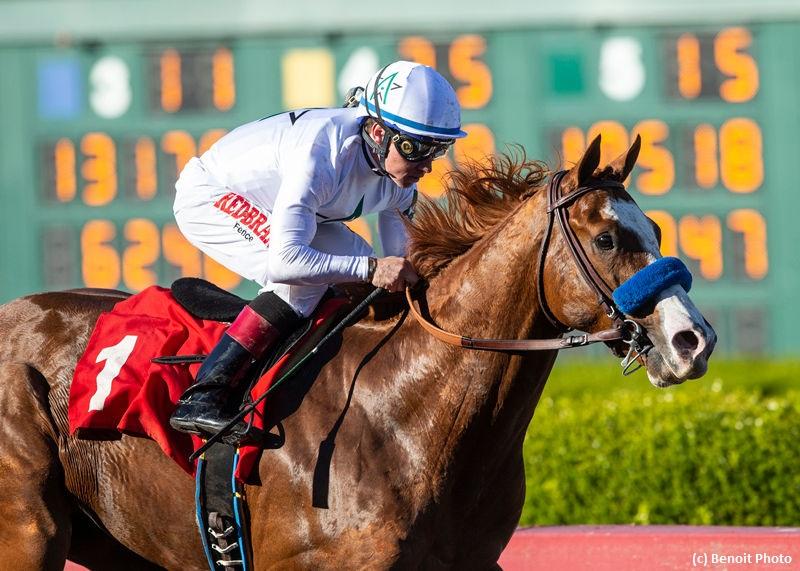 Team Justify is back on the Triple Crown trail. That’s the inescapable conclusion after WinStar Farm, China Horse Club, and Starlight Racing’s Improbable romped as the 1-5 favorite for Hall of Fame trainer Bob Baffert in Saturday’s $300,345 Los Alamitos Futurity (G1). Baffert was extending his dominance in the 1 1/16-mile test, not only winning it for a record 11th time, but also furnishing the exacta with Mucho Gusto in second.

Improbable offers superficial parallels with Justify, in that both are powerfully made chestnuts with undefeated records. But the first obvious difference is that Justify never raced at two, while Improbable has already stamped himself as a top-flight Kentucky Derby (G1) contender. The question now is whether Improbable will progress through the spring as Justify did.

The odds-on choice after a sparkling, 7 1/4-length victory in the Street Sense S. on Breeders’ Cup Friday at Churchill Downs , Improbable was stretching out to two turns for the first time at Los Alamitos. The son of City Zip figured to handle the added ground, especially being out of an A.P. Indy mare, and he looked stronger the farther he went.

Improbable was drawn on the rail, thus avoiding a chain reaction of interference caused by Savagery, who blew the turn and forced Extra Hope out and Dueling hopelessly wide. As that unfolded in front of him, regular rider Drayden Van Dyke was able to steer Improbable into an outside stalking spot on the clubhouse turn.

Meanwhile, Mucho Gusto had hustled to the front and dictated the pace until Improbable began to wind up turning for home. Accosting his stablemate with giant strides, the blaze-faced colt dispatched him down the stretch and drew away by five lengths. Improbable clocked a brisk 1:41.18, not far off the fastest time since the race moved to Los Alamitos, the 1:40.86 posted by past Baffert star Dortmund in the 2014 running.

Improbable earned 10 points toward the Kentucky Derby while advancing his record to 3-for-3 with $269,520 in earnings. Mucho Gusto, hitherto unbeaten and the 4-1 second pick, was best of the rest by three lengths. His runner-up effort was good for 4 Derby points, and third-placer Extra Hope took home 2 points. Savagery crossed the wire fourth but was demoted to fifth for interference after a stewards' inquiry. The stewards moved Dueling up to fourth, and he accordingly received 1 point.

Still comfortably atop the leaderboard is another unbeaten Baffert trainee, Breeders’ Cup Juvenile (G1) hero Game Winner, with 30 points. One of the key storylines of the 2019 Derby trail will be how Game Winner, the presumptive champion two-year-old male, stacks up against rising challengers like Improbable.