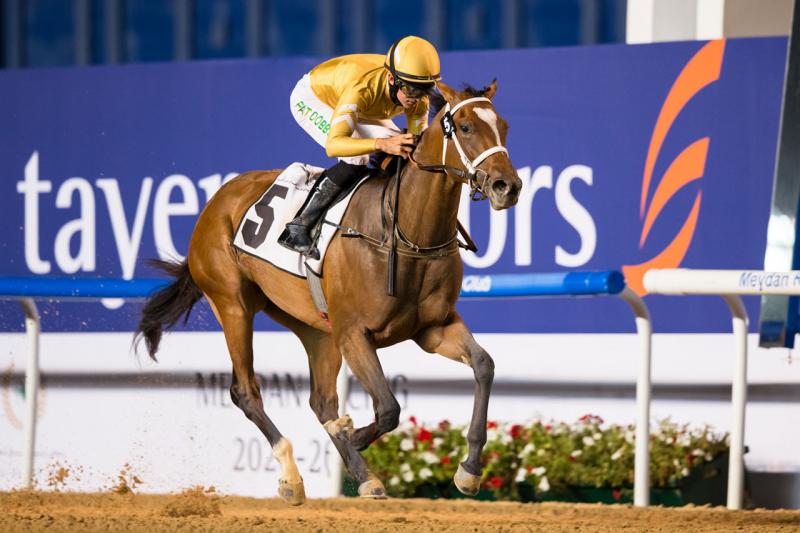 Saturday’s $750,000 UAE Derby (G2) has attracted an international field in keeping with its venue, the Dubai World Cup program at Meydan. American shippers Ambivalent and Lugamo will line up against Japanese contenders as well as a talented home team including fillies Soft Whisper and Mnasek. The only foreign scoring race on the main Road to the Kentucky Derby, the UAE Derby offers points on the 100-40-20-10 scale applicable to the U.S. leaderboard.

Four of the 14 entrants are coming off the Feb. 20 Saudi Derby on Saudi Cup Day – Japan’s Pink Kamehameha, who sprang an upset in his dirt debut; third-placer New Treasure, an Irish Group 3 scorer who was also trying dirt for the first time; and the well-fancied Godolphin duo of Rebel’s Romance and Soft Whisper, respectively fourth and fifth. All are stretching out from that metric mile to the about 1 3/16 miles of the UAE Derby.
Much more had been expected from Rebel’s Romance and Soft Whisper in Saudi, and a return to Meydan could see both offspring of Dubawi bounce back to top form. The previously unbeaten Rebel’s Romance had edged next-out UAE 2000 Guineas (G3) winner Mouheeb on this track. A U.S. Triple Crown nominee, Rebel’s Romance bids to give trainer Charlie Appleby and jockey William Buick their first UAE Derby victory.
Godolphin colleague Saeed bin Suroor, who has won a record eight UAE Derby trophies, relies on Soft Whisper. The highly regarded filly brought a four-race winning streak to Saudi, capped by a seven-length romp in the UAE 1000 Guineas over Mnasek. If we see that Soft Whisper here, the boys could be in trouble. Note that bin Suroor is responsible for the only filly to win the UAE Derby so far, Khawlah (2011).
Mnasek herself has claims. The Doug Watson filly had no chance of catching Soft Whisper thanks to a slow start in the Guineas, but she roared back to outclass her foes by 6 1/2 lengths in the UAE Oaks (G3) at this track and trip. The Kentucky-bred daughter of Empire Maker banked 50 points toward the Kentucky Oaks (G1), if connections are inclined to supplement her. Like Soft Whisper, Mnasek gets a four-pound weight concession from the three-year-old males. Adding to her appeal, both of Watson’s past UAE Oaks winners went on to finish second in this race, Polar River (2016) and Rayya (2018).
The 2-for-2 Panadol likewise exits a course-and-distance success in the Al Bastakiya, where the Salem bin Ghadayer pupil stepped up from a maiden score. Once again leading throughout, the New York-bred Flatter colt held the rally of Speight’spercomete. Although still a maiden, Speight’spercomete is on the upswing for Watson. The Charles Fipke homebred was turning the tables on El Patriota, who had beaten him in their prior start, but settled for third in their Al Bastikiya rematch. Another maiden, Fire Group, was fourth in the Al Bastikiya.
El Patriota, the lone Southern Hemisphere-bred in the field, captured the Uruguayan Derby in his homeland. He carries the top weight of 131 pounds, 10 more than the Northern Hemisphere-bred males, in recognition of his earlier birthday.
Although Pink Kamehameha came to the fore in Saudi, his stablemate from the Hideyuki Mori yard, France Go de Ina, could be even better. Nominated to the Triple Crown, France Go de Ina concluded his juvenile campaign with a pair of dominant victories going about 1 1/8 miles on the Hanshin dirt. Joel Rosario gets the riding assignment aboard the Kentucky-bred by champion Will Take Charge.
Takeru Pegasus isn’t a Triple Crown nominee, but the nearly white colt is a familiar face from the Japan Road to the Kentucky Derby. Just worn down in the opening leg, the Cattleya S., Takeru Pegasus reappeared with a fourth in the Hyacinth S. Japan’s lone UAE Derby winner, Lani (2016), moved forward from a Hyacinth fifth, so there’s precedent. British ace Ryan Moore takes the call.
Ambivalent represents Reddam Racing and trainer Doug O’Neill, two-time Kentucky Derby (G1) winners courtesy of I’ll Have Another (2012) and Nyquist (2016). A son of Constitution, Ambivalent comes off an overdue maiden win sprinting on the Santa Anita turf. He’s spent more time tackling stakes company. Demoted from third to fourth in last summer’s Best Pal (G2), Ambivalent placed third in the Del Mar Juvenile Turf, trailed when ambitiously spotted in the Champagne (G1), and fared better as the third in the Bob Hope (G3). Luis Saez picks up the mount.
Lugamo hails from the barn of Antonio Sano, best known for his work with $5.5 million-earner Gunnevera. Twice a romping winner at Laurel, Lugamo was most recently third in his stakes debut in the James F. Lewis III on Nov. 14. The UAE Derby marks a major class and distance hike off the layoff, but he teams up with a terrific international jockey in Oisin Murphy.
Carded as the 5TH of nine races on the Dubai World Cup program, the UAE Derby is scheduled for 10:05 a.m. (ET), and you can watch and wager at TwinSpires.com. 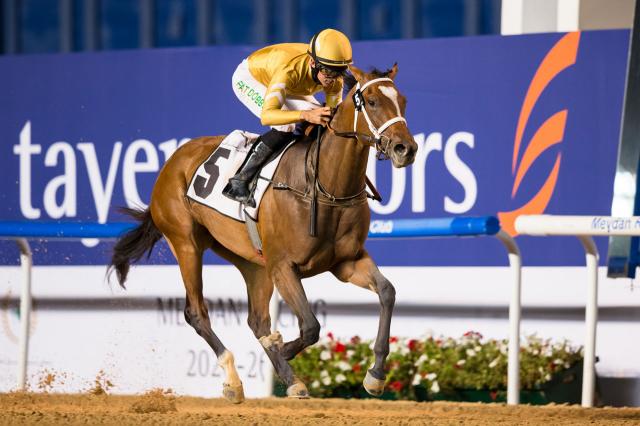