Mar 20, 2018 Dick Powell/Brisnet.com
Tweet
The Jeff Ruby Steaks (G3) was run at Turfway Park on Saturday. Formerly sponsored by Jim Beam, Galleryfurniture.com, Lane's End, Vinery Stables, Horseshoe Casino Cincinnati and JACK Cincinnati Casino, the race formerly known as the Spiral Stakes was run at 1 1/8 miles on the synthetic track.
Not one of the frequent stops for Kentucky Derby (G1) winners, it was won by Animal Kingdom in 2011, but the list of recent winners pales in comparison to the other Derby prep races.

Still, a full starting gate of 12 loaded on Saturday and six of them went off at single-digit odds; an indication of how well-balanced the field was. Hazit was sent off as the tepid 3-1 favorite but he lost all chance at the start and finished last.

Doug O'Neill is one of the sharpest shipping trainers there is and is always looking for a soft spot for his horses. BLENDED CITIZEN only had a maiden victory in seven starts, but he did run third at Golden Gate going this distance on a synthetic track last out in the El Camino Real Derby and that was enough for O'Neill to put him on the plane. Even at 6-1 odds, he was the second betting choice.

Blended Citizen was far back early even with the addition of blinkers and when lone speed horse Mugaritz began to tire, there was a lot of traffic at the top of the stretch. Kyle Frey steered Blended Citizen through a narrow opening between horses then needed room nearing the wire. Mugaritz drifted out just enough and Blended Citizen's dream trip continued to the wire where he held off Pony Up by a neck.

He only earned 20 Kentucky Derby eligibility points for his win but he did earn grade three stakes status and $113,000 in purse money. His final time was 1:50.87 and he earned a BRIS speed rating of 100, which puts him right in the mix of Derby contenders.

The issue for Blendid Citizen is that his last two races, which were his best, came on synthetic tracks. His prior three starts came on turf and his first three career starts came on dirt and he could not get closer to fifth place in them.

Genetically, he should do a lot better on dirt since his sire, Proud Citizen, sired two winners of the Kentucky Oaks (G1). Blended Citizen's dam has produced Lookin at Lee who flew home to be second in last year's Derby.

The issue I have with his form is that he was only a neck ahead of Pony Up who was beaten last out by 20 lengths in the Holy (G2). He was a decent turf horse but up until the Jeff Ruby Steaks, his career high BRIS speed rating was only 92 and that was earned going five furlongs in his career debut last July.

We have seen in the past that horses do well going from synthetic to dirt tracks and Blended Citizen should have no trouble going back to it. His two starts this year were solid, he earned BRIS speed ratings of 100 in both of them and he is bred to go long on the dirt. Throw out last year's form and he could be a contender at a square price. 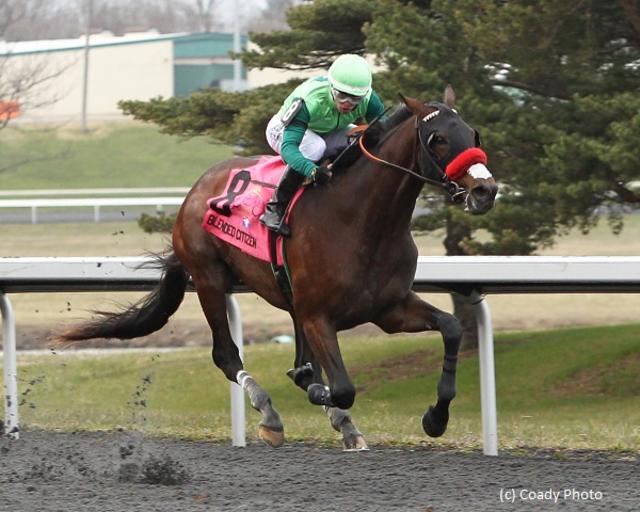