Michael McLoughlin’s Curly Jack picked up 10 points on the 2023 Road to the Kentucky Derby challenge series following his one-length victory in the $299,250 Iroquois S. (G3) at Churchill Downs on Sept. 17. The two-year-old colt finished off 1 1/16 miles on the fast main strip in 1:45.62 under jockey Edgar Morales to record his initial stakes tally.

“It was a great ride by Edgar Morales,” Amoss said. “I think he is, now was, the best kept secret in the jocks room. The secret is going to be out with him. He really rode him great. I'm super proud of my horse."

He debuted beneath the Twin Spires on June 2 and led at every call en route to posting a four-length win in a maiden special weight tilt run at 5 1/2 furlongs. The April foal jumped up to the graded ranks second time out at Saratoga, where he led to the top of the lane before ultimately finishing fifth in the July 16 dash. In his second most recent outing, Curly Jack rallied from off the early tempo to finish a head second in the Juvenile S. at Ellis Park on Aug. 14.

He was bred in the Bluegrass State by Betz, J. Betz, Kidder, et al., and was purchased by his current connections for $180,000 at the 2021 Keeneland September Yearling Sale. The juvenile is the first stakes winner produced from the Grade-1 placed Roman Ruler mare Connie and Michael, who was runner-up in the 2010 Mother Goose S. (G1) at Belmont Park. The mare is also responsible for an unnamed yearling colt by Gun Runner.

Curly Jack has registered Brisnet Speed figures of 86-85-93-86 from four lifetime tries to date, and he passed his first two-turn test with aplomb, too. His next race, according to his conditioner, could be in the Breeders’ Cup Juvenile (G1) at Keeneland on November 4. 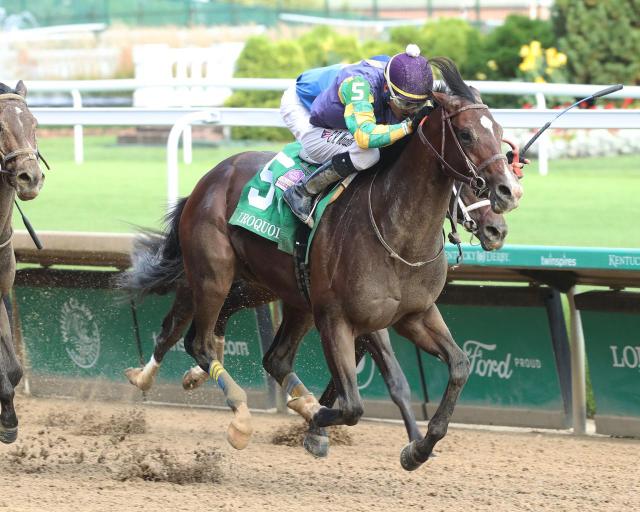