Godolphin’s homebred Essential Quality earned 100 more points on the 2021 Road to the Kentucky Derby following a game neck triumph in the $800,000 Blue Grass S. (G2) at Keeneland on April 3. Piloted by regular rider Luis Saez, the colt finished 1 1/8 miles over the fast main surface in 1:48.50 for conditioner Brad Cox.

“It’s a tremendous feeling,” his trainer stated after the race. “He had to dig in today. It was probably what he needed. It was good for him to get a good test today. He did everything easy enough in his last race. I was proud of what he was able to overcome today. Big effort.”

Essential Quality kept his perfect mark intact from five lifetime outings, while boosting his career earnings to $2,265,144 in the process. He also sits atop the Derby leaderboard with a total of 140 points.

The son of Tapit was unveiled on Sept. 5 beneath the Twin Spires and left little doubt following a four-length victory as the 19-10 post time favorite. Sent to Keeneland for his second assignment, the gray sophomore took the lead turning for home and cruised home a convincing, 3 1/4-length victor of the Breeders’ Futurity (G1).

The Kentucky-bred capped his sterling juvenile season with a tally in the Breeders’ Cup Juvenile (G1), and he was later named the 2020 champion two-year-old male. Last out in the Southwest S. (G3) at Oaklawn Park, he traveled four-wide for much of the contest before turning it on inside the final furlong in what was possibly his most impressive showing to date when drawing off by 4 1/4 lengths.

Essential Quality is the second foal out of the stakes-placed Elusive Quality mare Delightful Quality, who counts herself as a half-sister to champion Folklore, heroine of the 2005 Breeders’ Cup Juvenile Fillies (G1). This is the same female line as Japanese champion Contrail.

The standout three-year-old has been best in each of his five assignments to date. And while there are numerous speed influences throughout his catalog page, he surely acts like a colt who will thrive with more distance. His Brisnet Speed numbers so far in 2021 are 98 and 102, which includes a superb 106 Brisnet Late Pace figure in the Bluegrass. The 1 1/4-mile distance at Churchill Downs on May 1 should pose no problem for the talented sophomore. 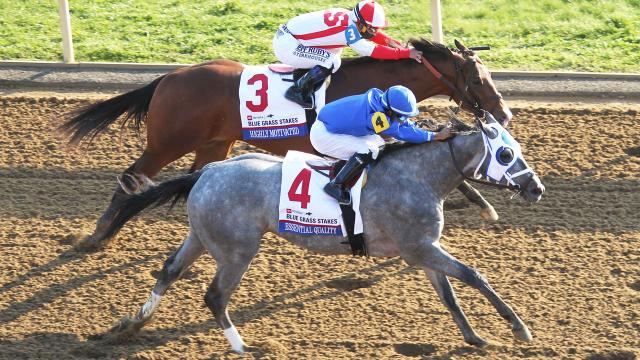