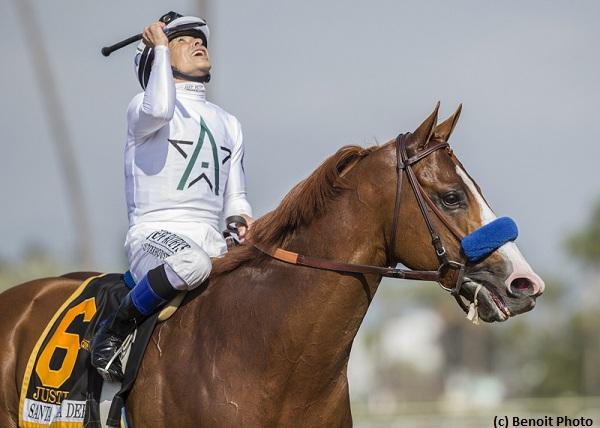 Bob Baffert was joking about needing to get starts into some of his unraced two-year-olds before the end of the year. It turns out, he wasn’t joking.

Knowing that every Kentucky Derby (G1) winner since Apollo in 1882 had raced as a juvenile, Baffert knew that his two-year-olds that had not started by January 1 were going to be up against it.

Still, on February 18 at Santa Anita, he raced first-time-starter JUSTIFY and not only were the results electrifying but Baffert said immediately after the race that he had a plan to get the son of Scat Daddy to the Derby. The chestnut colt earned a BRIS Speed rating of 100.

Three weeks later, Baffert entered Justify in a first-level allowance race back at Santa Anita, but this time he removed blinkers and replaced Drayden Van Dyke with Mike Smith. Over a sealed, muddy track, Justify stalked the pace while racing wide, passed the leaders on the far turn out in the middle of the track, and cruised to a 6 1/2-length victory in good time despite being throttled down in the stretch. He earned a BRIS Speed rating of 104.

With that out of the way, the plan was to go to one of the major Derby prep races and, after McKinzie was injured, Baffert decided to keep Justify home for the Santa Anita Derby (G1). Waiting for him was two-time Grade 1 winner Bolt d’Oro, who was leading most lists of top three-year-olds this year.

Justify was sent off as the narrow 9-10 betting favorite and Bolt d’Oro was close behind at 11-10. Smith was able to make the lead with Justify going into the first turn and set a comfortable pace. The track was dry and tiring since expected rain never came, so the pace might have been faster than it looked as Smith had things his own way while racing off the rail.

Javier Castellano was biding his time aboard Bolt d’Oro before making a determined effort heading to the quarter-pole. He went to a right-hand whip but Smith and Justify countered and repelled the challenge. Justify moved over to the rail in the stretch and Smith gave him three left-handed cracks of the whip. At the wire, Justify was three lengths in front and it looked like he was pulling away.

He earned a BRIS Speed rating of 114. Audible is the next fastest three-year-old this year with a 107.

So Baffert said he had a plan, he executed it to perfection and now has four weeks to have Justify ready for Churchill Downs. The Scat Daddy sophomore has answered just about every question in a short period of time and, looking at his workout before the Santa Anita Derby, he could actually be getting better.

What was so impressive about Justify in the Santa Anita Derby was that he showed he can finish his race even when going slower in the early stages than ever before. A closer look at his BRIS Pace ratings bear this out – 100, 105, 117. Unlike most dirt horses, he was applying constant pace pressure without any signs of exertion.

Rare is the two-turn dirt horse that can run faster pace figures as the race goes on. Justify is that rare. 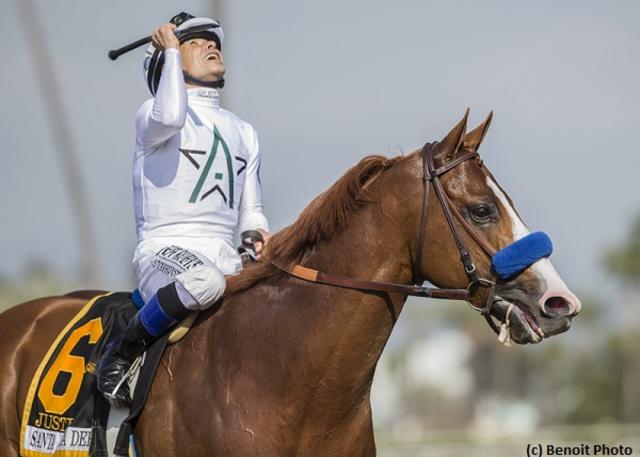