Live Oak Plantation’s homebred Soup and Sandwich has earned 40 points on the 2021 Road to the Kentucky Derby challenge series off the strength of his runner-up performance in the Florida Derby (G1) on March 27. The gray will make his second Grade 1 appearance at Churchill Downs on May 1.

Trained by Mark Casse, the late-developing Soup and Sandwich debuted on Jan. 28 at Gulfstream Park in a 6 1/2-furlong dash against state-bred foes and sent notice that he could be a really good one when drawing off to a commanding 7 1/4-length victory. He was sent to Tampa Bay Downs and stretched out in distance in an allowance test in his second try, and the colt aced his first run with winners with a 2 1/4-length triumph. Following his second-place result at Gulfstream Park last time out, the intriguing sophomore improved his lifetime line to 3-2-1-0, $203,875.

Soup and Sandwich was bred in the Sunshine State and is the first foal out of the winning Tapit mare Souper Scoop, who is also responsible for a yearling colt by Kantharos named Soupersilverdollar. The second dam of the son of top sire Into Mischief is 2001 Indiana Oaks (G3) starlet Scoop. His third dam, the Grade-3 winning Til Forbid, finished third in the 1991 Kentucky Oaks (G1).

The lightly-raced colt has garnered Brisnet Speed numbers of 98-90-98 from his trio of lifetime showings to date. In addition, his Brisnet Late Pace figures have been strong (98-106-101) to hint that he will excel with added ground going forward.

Soup and Sandwich is light on seasoning and will need a big step forward to be considered a major player in the Run for the Roses on May 1. However, the talented colt possesses a lot of room for improvement, and his conditioner has saddled two previous winners of classic races as well. The up-and-coming contender is another who can have a say in the outcome at a square price if he proves to be thriving in the weeks leading up to the Kentucky Derby. 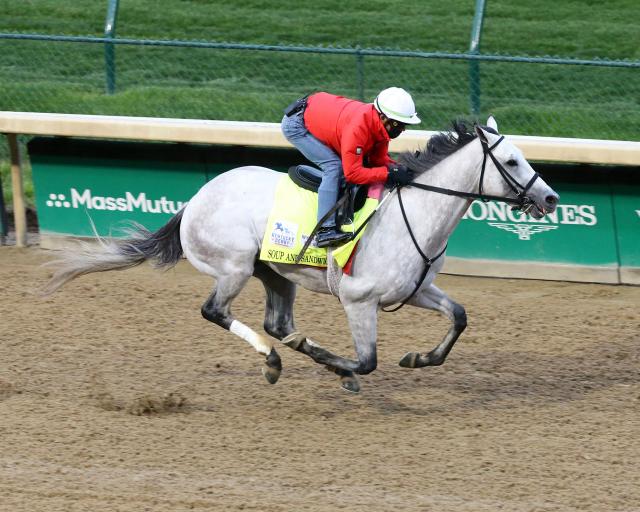