SF Racing, Starlight Racing, Madaket Stables, Golconda Stables, Siena Farm, and Robert Masterson’s Spielberg earned 10 points on the “2021 Road to the Kentucky Derby” when posting a nose victory in the$200,500 Los Alamitos Futurity (G2) on Dec. 19. The Bob Baffert juvenile completed 1 1/16 miles over a fast dirt surface in 1:42.56 with Flavien Prat in the stirrups to improve his lifetime line to 6-2-2-1, $257,200.

Spielberg made his debut on Aug. 8 at Del Mar in a 6-furlong maiden special weight dash and checked in second as the 4-5 favorite. The son of Union Rags was sent right to the Grade 1 ranks and was again runner-up, this time in the Del Mar Futurity (G1).

A third-place result followed in the American Pharoah (G1) at Santa Anita in his route debut, which preceded a narrow maiden victory traveling one mile at Del Mar. The youngster was most recently a well-beaten fourth in the Bob Hope (G3).

Bred in the Bluegrass State by G. Watts Humphrey, Spielberg brought the gavel down at a cool $1 million at the 2019 Keeneland September Yearling Sale. He is the first stakes star produced from the winning Smart Strike mare Miss Squeal, who counts herself a half-sister to a trio of black-type winners, including 2017 Curlin S. victor Outplay. This is the same female line as Grade 1 standouts Dream Deal, Clear Mandate, Strong Mandate, and Romantic Vision, as well as multiple graded hero Newfoundland.

Spielberg is from a stellar female line and has the pedigree that should carry him a classic distance as he develops into his 3-year-old season. The $1 million purchase is in expert hands with Baffert, and his six-race foundation as a 2-year-old will only aid him as he travels on the Triple Crown trail in 2021. 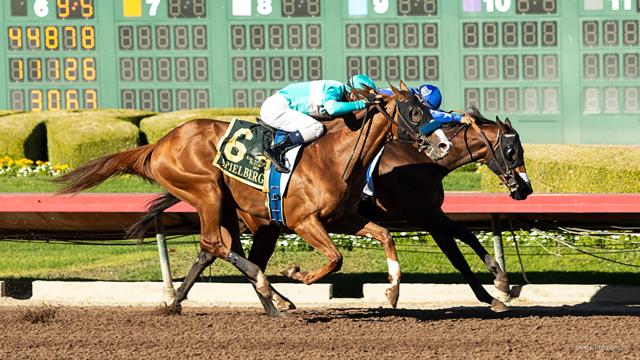