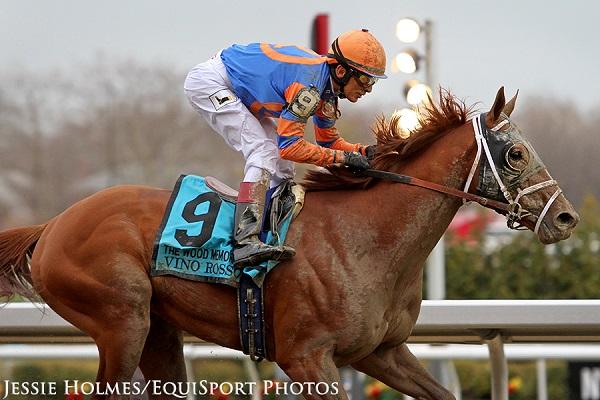 VINO ROSSO won a maiden at Aqueduct and an allowance race at Tampa Bay Downs last year and gave the impression that he would get better as his career progressed. He was favored both times, so internal expectations must have been high.

Todd Pletcher sent him back up to Tampa Bay Downs for the Sam F. Davis Stakes (G3) in February and he was no match for the speedy Flameaway, who went gate-to-wire. Next up was the Tampa Bay Derby (G2) and Pletcher decided to add blinkers but Vino Rosso ran more like vinegar than red wine.

He was fourth, beaten six lengths when stuck behind a pedestrian pace but his final BRIS Pace figure of 104 at least showed that long distances are not a problem for him.

Pletcher has already won the Louisiana Derby (G2) with Noble Indy and the Florida Derby (G1) with Audible. Magnum Moon was always intended for the Arkansas Derby (G1) because of his connections so Vino Rosso would have to redeem himself at Aqueduct in the Wood Memorial (G2).

And, after all, who is more New York than co-owners Mike Repole and Vinnie Viola?

So Vino Rosso went to the Big A for the Wood. Pletcher, Johnny Velazquez and Viola won it last year with Kentucky Derby winner Always Dreaming and Vino Rosso was the second betting choice at 4-1 behind Enticed, winner of the Gotham Stakes (G3) last out there.

Velazquez kept Vino Rosso far back early off a strong pace. At one point, he was farther behind than he ever had been in any race but began to pick up horses around the far turn and engaged the leaders at the top of the stretch. Soon it was a two-horse race and Vino Rosso quickly forced Enticed over to the rail.

In the stretch, Vino Rosso bumped Enticed twice and pulled away to a three-length victory. After a lengthy review, the stewards left Vino Rosso up as the winner but fined Velazquez $1,500 two days later for careless riding.

Vino Rosso earned a BRIS Speed rating of 102 in the Wood and, considering how much ground he lost around the turns, it was a solid effort. Don’t know why he ran so bad in the Tampa Bay Derby but this was a redeeming effort on his part. Can he move forward is the big question.

He’s bred top and bottom to go long on the dirt being by Curlin out of a dam by Street Cry. She only won once but it was by 10 lengths going two turns on the dirt and she is a half-sister to Commissioner, who won the Pimlico Special (G3) at 1 3/16 miles, the Hawthorne Gold Cup (G2) at 1 1/4 miles and missed going gate-to-wire by a head in the 1 1/2 mile Belmont Stakes (G1).