C2 Racing Stable and La Milagrosa Stable’s White Abarrio picked up 10 points on the 2022 Road to the Kentucky Derby series after posting a 4 1/2-length tally in the $250,000 Holy Bull S. (G3) at Gulfstream Park on Feb. 5. The three-year-old Saffie Joseph trainee endured 1 1/16 miles on the fast main strip in 1:42.80 with Tyler Gaffalione in the controls.

“It was an ideal trip,” Gaffalione said. “The horse broke sharply and put me where I wanted to be. He settled nicely on the backside and when I called on him, he gave me another gear and finished the job well.”
“I don't think distance is going to be a problem. He was just hitting his best stride down the lane and, galloping out, I had a really difficult time pulling him up. I was calling for the outrider.”
Simplification, favored Mo Donegal, and Galt rounded out the top four and received qualifying points on a 4-2-1 basis, respectively.

White Abarrio sent notice that he was a runner from the start, as the son of Race Day streaked clear to a 6 3/4-length romp in a maiden special weight dash at Gulfstream on debut. A four-length allowance waltz followed, prior to the colt finishing third in the subsequent Kentucky Jockey Club S. (G2) in his juvenile finale. His lifetime line now reads 4-3-0-1, $240,850.

The gray or roan colt was bred in Kentucky by Spendthrift Farm and passed through the auction ring on a pair of occasions. White Abarrio was a $7,500 short yearling at OBS January, prior to bringing the gavel down at $40,000 as a two-year-old at the 2021 OBS March Sale.

He is the first stakes star out of the Into Mischief mare Catching Diamonds, who counts herself as a half-sister to dual Grade 3 winner Cool Cowboy. This is the same female family responsible for Brazilian champion Juno.

The colt has been consistently good while notching Brisnet Speed figures of 96-91-91-97 from his quartet of races to date. His pedigree shows multiple turf influences on his dam’s side, but he does possess a nice combination of speed and stamina throughout his catalog page, and the sophomore has clearly handled the dirt well to this stage of his development. If the prospect proves capable of handling nine furlongs in his next prep, then he has to be considered among the leading contenders on the Triple Crown Trail this spring.

White Abarrio is likely to contest the $1 million Florida Derby (G1) at Gulfstream Park on April 2. 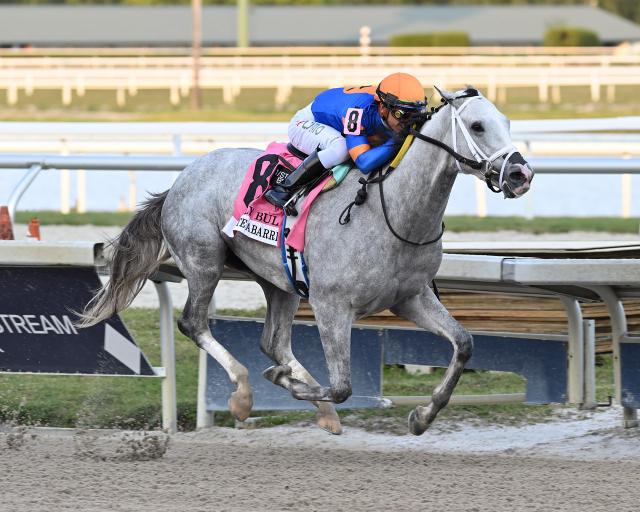