The colts, who finished behind Omaha Beach in their final tune-up for the 145th running of the $3 million Kentucky Derby presented by Woodford Reserve (GI) on May 4, stepped off the Brook Ledge Horse Transportation van and walked to their nearby barns shortly after 10 a.m. EDT. Also on the flight was the mare Elate, who along with Country House is trained by Bill Mott.

Improbable, the first of trainer Bob Baffert’s potential trio of Derby starters to arrive in Barn 33, is 11th on the leaderboard after earning 40 points in Saturday’s 1 1/8-mile test. He races for WinStar Farm, China Horse Club and Starlight Racing. He earned 65 points on the Derby trail.

Country House, a stablemate of leading points earner Tacitus in Mott’s Barn 19, has 50 points and sits at 17th on the points list. He is owned by Mrs. J.V. Shields, E.J.M. McFadden Jr. and LNJ Foxwoods. The top 19 on the points list earn a spot in the starting gate for the Run for the Roses and an additional spot is carved out for Master Fencer (JPN) from the Japan Road to the Kentucky Derby.

Willis Horton Racing’s homebred Long Range Toddy also made his reappearance at Churchill Downs Monday morning for Hall of Fame trainer Steve Asmussen. The winner of the Rebel Stakes (GII) will be stabled in Barn 38.

Fox Hill Farm’s Omaha Beach, the Arkansas Derby winner trained by Richard Mandella, is vanning to Louisville, and is expected to arrive on Tuesday afternoon at Barn 28 between 1:30 p.m. and 2:30 p.m., according to Steve Hargrave, Senior Director, Stable Area.

“She’s really excelling following the Gulfstream Park Oaks,” Landeros said. “Even though the time wasn’t too fast this morning, she did everything effortlessly. I really think she’ll be coming into the Oaks at the peak of her career.”

Trained by Landeros’ father-in-law Ian Wilkes, Champagne Anyone is stabled in Barn 26.

In her first work following the Fair Grounds Oaks, Street Band, with Sophie Doyle up, worked five furlongs in 1:00.40. Trained by Larry Jones, Street Band broke off from the pony and swiftly began breezing through fractions of :11.80, :23.40 and :35 before galloping out six furlongs in 1:15.20.

“I think she loved this weather and was feeling good getting back to work,” assistant trainer Corey York said. “This was her first work back from the (Fair Grounds Oaks) and I think that’s why she went pretty quick early. She looks great and is training great.”

Street Band is stabled in Barn 28.

UAE DERBY WINNER PLUS QUE PARFAIT LIKELY TO BREEZE THIS WEEKEND – Imperial Racing’s Plus Que Parfait, who stamped himself in the Kentucky Derby starting gate with a narrow victory in the UAE Derby (Group II), is likely to return to the work tab this weekend, according to trainer Brendan Walsh.

Plus Que Parfait, which translates to “more than perfect” in French, spent more than a week in Europe prior to his return to Churchill Downs’ Barn 9 on Thursday.

“I think the extra eight or nine days over in Europe helped him,” Walsh said. “I think that allowed him to relax a little bit after

the race and gather himself before flying to America. He settled in really nicely at Churchill and I’ll probably work him towards the end of the week depending on the weather. He’s a happy horse right now.”

Plus Que Parfait was the runner-up in the Kentucky Jockey Club (GII) as a 2-year-old but began his 3-year-old campaign with a fifth-place finish in the Lecomte (GIII) and a 13th-place effort in the Risen Star (GII) before winning the UAE Derby. 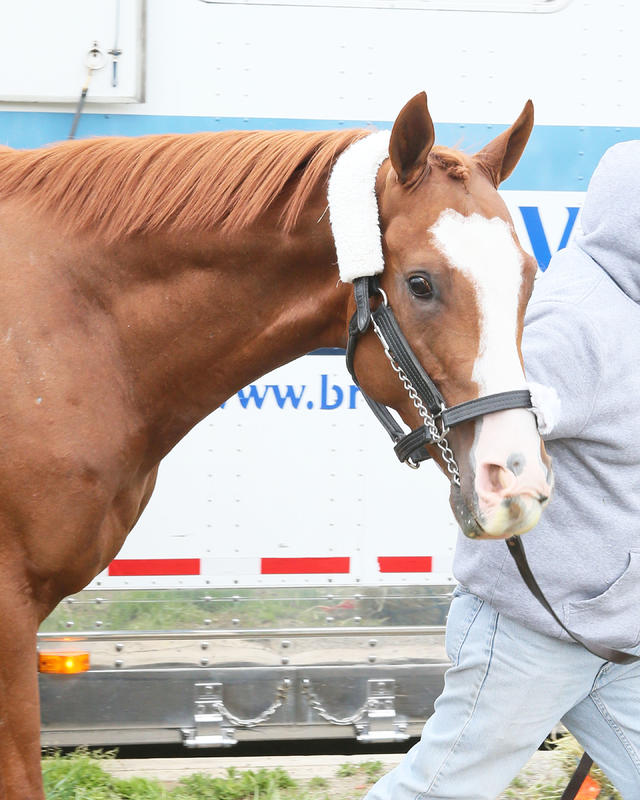