With jockey Marcelino Pedroza in the saddle, O Besos began his work at the three-furlong pole and worked through early fractions of :12 and :36.20. Pedroza shook the reins at the Orb colt at the wire where he picked up his tempo through a five-furlong gallop out of 1:00 and continued six furlongs in 1:12.60.

The National Weather Service is calling for a 90 percent change of precipitation Saturday morning in Louisville and Lexington. At Keeneland, Derby contenders Hidden Stash and Like the King could move their works to Friday, according to their respective trainers.

At Santa Anita, Zedan Racing Stable’s Medina Sprit worked six furlongs in 1:12.20 and is slated to arrive at Churchill Downs Friday at 1 p.m.

“The forecast keeps changing, but it is looking dicey for Saturday,” Pletcher said after his runners galloped 1 3/8 miles over a fast track Thursday morning. “Twenty-four hours won’t make a difference.”

Ramos was aboard Known Agenda this morning at 7:30 and 20 minutes later on Bourbonic while Green partnered Sainthood at 7:30 and Carlos Perez Quevedo was on Dynamic One at 7:30.

HELIUM, SOUP AND SANDWICH – D J Stable’s Helium and Live Oak Plantation’s homebred Soup and Sandwich stretched their legs Thursday morning on the eve of their planned final Derby preparations. Helium, with Paolo Levi aboard, and Soup and Sandwich, with Gilbert Hernandez, both galloped 1 ½ miles for trainer Mark Casse.

“They’ll both breeze tomorrow; Helium will go around 5:25 and Soup and Sandwich will go at 7:30,” Casse’s assistant David Carroll said. “They’ll just go an easy half-mile. They both had their major works last week and came out of it extremely well. Tomorrow will just be a maintenance move. Normally we’d go Saturday but with the forecast we’ll back it up a day and play it on the safe side.”

Helium, who is undefeated in three starts, and Soup and Sandwich, who is 2-for-3, are both lightly raced and full of potential, though that’s where the similarities end.

“They are two different types of horses to train,” Carroll said. “Helium is a really beautiful mover and gets over the ground and trains into the bridle while Soup and Sandwich has his own way of going, but when he breezes, he’s all business.”

HIGHLY MOTIVATED – Klaravich Stables’ Highly Motivated came out onto the track under Peter Roman shortly after 7:30 and galloped then walked to the starting gate during the 15-minutre training window for Derby and Kentucky Oaks horses.

Trainer Chad Brown was pleased with what he saw and will keep an eye on the weather for the Blue Grass (GII) runner-up’s final work.

“It went fine and it was good to get that out of the way,” Brown said. “I’m just trying to figure out now when I’m going to try and breeze. I’m going to watch the weather; I’d prefer to work him Saturday morning before the rain comes. I was speaking to the track superintendent and looking for a little guidance on that.”

HOZIER – Rebel Stakes (GII) runner-up Hozier galloped a mile and a half at 9:15 under exercise rider Joel Osorio for trainer Bob Baffert.

Hozier is No. 21 on the Road to the Kentucky Derby leaderboard.

KEEPMEINMIND – Spendthrift Farm, Cypress Creek and Arnold Bennewith’s Keepmeinmind galloped a mile and a half a little before 6 o’clock with Walter Davila aboard for trainer Robertino Diodoro.

“David Cohen is flying in tonight to work Ava’s Grace (for the Oaks) and Keepmeinmind and then fly back to ride that afternoon at Oaklawn Park,” said Sean Williams, assistant to Diodoro. “We put Walter on him this morning to get a feel for him in case something happens and David doesn’t get in.”

Keepmeinmind is No. 23 on the Road to the Kentucky Derby leaderboard

KING FURY – Fern Circle Stables and Three Chimney’s Farm’s King Fury galloped 1 ½ miles during the reserved time for Kentucky Derby and Oaks horses. The winner of the Lexington Stakes (GIII) at Keeneland in his most recent start is expected to have his final workout on Saturday, according to Greg Geier, assistant to trainer Kenny McPeek. He’s at No. 21 on the Derby points leaderboard and needs a defection to make the field of 20.

MIDNIGHT BOURBON, SUPER STOCK – Winchell Thoroughbreds’ Midnight Bourbon and Erv Woolsey’s and Keith Asmussen’s Super Stock each had an easy Thursday morning as they readied for their final Derby works in the coming days for trainer Steve Asmussen.

With jockey Marcelino Pedroza in the saddle, O Besos began his work at the three-furlong pole and worked through early fractions of :12 and :36.20. Pedroza shook the reins at the Orb colt at the wire where he picked up his tempo through a five-furlong gallop out of 1:00 and continued six furlongs in 1:12.60.

“We’re really pleased with how the overall work went and how strong he galloped out,” trainer Greg Foley said. “Our horse has shown improvement in every start so far. We think leading up to the Derby he’s going to keep showing that improvement and run a big effort. He’ll be ready to make a run at the field at the top of the stretch.

“We had some distance questions when we ran in the Louisiana Derby but he was the only horse in the field that day who was making up any ground.”

O Besos will have a scheduled walk day Friday.

LONGINES KENTUCKY OAKS UPDATE – Three jockeys are expected to be aboard their Kentucky Oaks mounts Friday morning for the final timed workouts before the 147th running of the $1.25 million race.

Florent Geroux is scheduled to be aboard Travel Column at 5:15, David Cohen on Ava’s Grace at 5:30 and John Velazquez on Malathaat at 7:30.

AVA’S GRACE – Cypress Creek Equine’s Ava’s Grace galloped a mile and a half under exercise rider Walter Davila at 5:30 for trainer Robertino Diodoro.

Runner-up in the Fantasy (GIII) in her most recent start, Ava’s Grace is scheduled to work Friday morning with jockey David Cohen slated to be aboard.

CLAIRIERE, PAULINE’S PEARL – Stonestreet Stables’ homebreds Clairiere and Pauline’s Pearl both backed up to the wire and galloped a mile and a quarter. Both fillies will have their final Oaks works Sunday.

Both fillies are scheduled to work Friday, according to Cox.

CRAZY BEAUTIFUL – Phoenix Thoroughbred’s Crazy Beautiful, sitting in third on the Oaks leaderboard, was out as the sun bathed the track on the crisp, cold morning. The winner of the Gulfstream Park Oaks (GII) galloped 1 ½ miles under exercise rider Danny Ramsey during the 7:30-7:45 a.m. training window reserved for Kentucky Derby and Oaks hopefuls. She is expected to work Saturday morning, according to Greg Geier, assistant to trainer Kenny McPeek.

Malathaat is scheduled to work Friday.

PASS THE CHAMPAGNE – Trainer George Weaver said that all the heavy lifting is done for Pass the Champagne, runner-up to Malathaat in the Ashland (GI) in her most recent start.

“She worked five furlongs in 1:00 on Monday (at Palm Beach Downs and she will not breeze again,” Weaver said via text. “She ships Sunday and arrives at Churchill early Monday morning.

Brown indicated the daughter of Flatter will have her final work for the Oaks Friday morning.

The Kentucky Derby Newsfeed is now available via FTP download. Files are 1080 HD and will be uploaded on a daily basis

You will receive a prompt to enter a username and password. 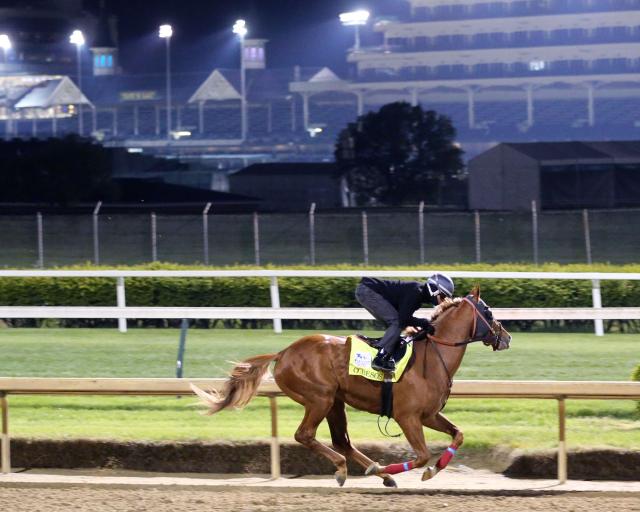